Q. How do you record Upright Piano? 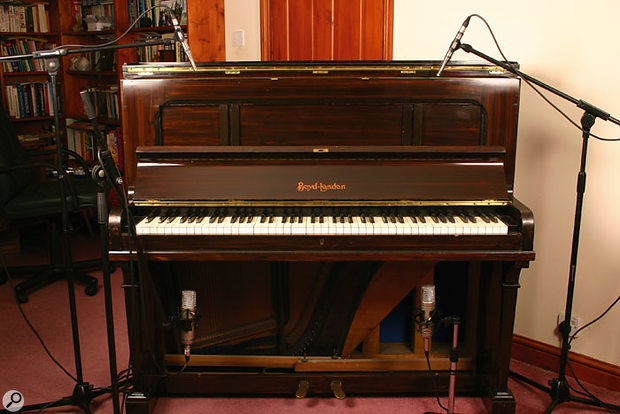 Hugh: I've had very limited success recording upright pianos. They almost always sound small and boxy compared to a concert grand, but then most of my piano recording is for orchestral or concert work, where the grand is almost always used. But if you've got an upright in your front room, don't dismiss the idea of recording it: sometimes the smaller scale and reduced bass weight of an upright fits well into a complex track.

Paul: For starters, before setting the mics up, I'll always try to take off the casing of the piano; usually the lid and the section of front panel directly above the keyboard, but also the panel above the pedals. Once you've taken these off, the whole thing will sound better, with fewer rattles and boxy colorations. Also, it will be a lot easier to place the mics.

Hugh: A common choice for recording in the pop music style on a grand piano is with a pair of mics placed close to the hammers, one covering the bass end and the other on the high end. This tends to give a bright, clear sound that cuts through well in a busy mix, and you can do the same with an upright. The hammers in most uprights are mounted vertically, and they strike the strings from the front about six inches above the level of the keyboard. To place mics above the strings near these hammers, the most common solution is to squeeze in from above through the open lid, using small-diaphragm mics and tallish boom arm stands [as shown below left]. Place the stands behind or to each side of the instrument and adjust the mic positions to get the most even spread of notes between them. Be careful not to over-emphasise high and low notes, at the expense of the mid-range! 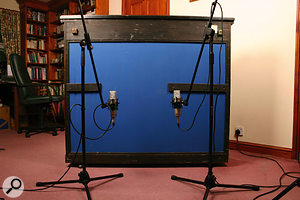 Paul: Most other miking techniques concentrate on capturing the sound from the soundboard, and you can access that in an upright in two ways. The most obvious way is to approach from behind and place one or two mics on stands so that you can move them around to find a good balanced sound. Every piano is different, so experimentation is the only way. Often a good starting point is slightly above the level of the keyboard, a foot or so in from each side, and within six inches of the soundboard, but sometimes you find a better balance lower down [as shown in the picture, below right]. As you move the mics around you'll be able to adjust the balance between highs and lows, and between hammer percussion and soundboard resonance. With two mics, be careful to check for phasing problems by listening in mono for weak bass and comb-filtering.

Hugh: When using this method, the piano usually needs to be well away from a wall, otherwise reflections will colour the sound too much. Miking from the back can work quite well if you are recording other instruments at the same time too, as the piano itself will act as a partial screen to help reduce spill, as long as you angle it appropriately to cast a 'sound shadow' across the mics. However, you can use the wall to your advantage if you drape a duvet behind the piano and around the edges to minimise sound reaching the mics. 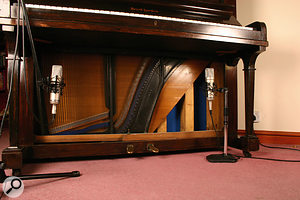 Paul: An alternative approach is to mic the soundboard from the front, by removing the front lower panel under the keyboard and placing one or two mics near the sound holes [as shown in the centre picture, below]. I rarely use this position myself as I find you tend to get more pedal noises and foot tapping, but it is a useful one to try if the other positions aren't workable for whatever reason.

Hugh: Pedal noises always seem to be a problem with uprights, partly because of the mechanical design, and partly the poorer maintenance that so many uprights receive. If the sustain pedal thumps when released, you can sometimes reduce the clonk by inserting a little foam wedge above the pedal, but beware of stopping the dampers from closing completely, or you'll end up with a very reverberant piano!

Paul: The other common problem with uprights is often the rooms they are housed in; usually domestic sitting rooms which are (in acoustic terms) almost always small and boxy. What's more, the piano is almost always placed against a wall, often in the corner! So the first thing is to move the piano around the room and at different angles to try to find a position where it sounds as good as it can. The next thing is to get a piano tuner in to set it up as well as possible and, as already mentioned, make sure that those pedals aren't clonking. If you're looking to buy an upright piano, the taller the upright, the better in general terms; the extra height allows longer bass strings and a more balanced tonality.