Q. How many reverbs should I use? 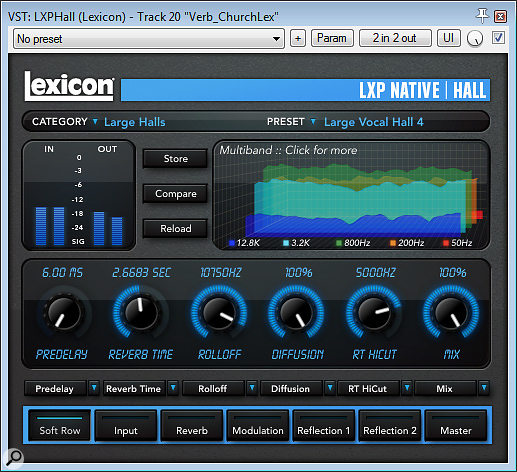 How many different reverb sends do you set up? Is it OK (or even preferable) to send one track to more than one reverb effect?

SOS contributor Mike Senior replies: At the risk of sounding glib, you should set up as many reverb sends as you need. I'm not trying to be evasive by saying that, though, because it really is totally context dependent. I've done mixes without a single reverb, and I've done mixes with more than a dozen — neither is 'wrong' under appropriate circumstances.

For example, I'm just finishing up mixing an album for a largely acoustic band where I'm using four or five reverbs per mix: a short, narrowed patch to blend the snare with the drum kit; a basic short ambience for ensemble cohesion across the board; a larger hall setting for spaciousness and 'expanse'; and a longer plate or two for sustain on vocals or plucked instruments. On the other hand, to mix the riff-rock band Magician's Nephew (as featured in SOS January 2019's Session Notes column) I had a dense ambience to blend the snare and toms with the rest of the kit, the merest dusting of large room to make the drums sound like they weren't recorded in the band's super-small basement room, and a touch of ambience to glue the lead vocal into the mix.

In both these cases, each reverb has been conceived to serve a distinct purpose, and that purpose is inherently linked to that type of music and the style of that recording. There's quite a bit of spill between instruments on the acoustic band's recording, for example, and I was happy with quite a natural ambient sound. With Magician's Nephew, on the other hand, there was no spill between any of the instruments (except the live drum kit components, obviously), and I was happy to keep everything very dry and present, in line with the sonics of competing rock productions I was referencing. So rather than feeling you need to count the number of reverb sends, it's much better to ask "what needs reverb in this mix?" and go from there.

As for whether to send multiple tracks to a single reverb, there are some high-profile engineers who prefer to avoid that, but I can't say I've ever experienced a problem with it myself. Yes, it can be useful to restrict a reverb to just one voice/instrument if you have to specifically tailor the send in some way (perhaps with de-essing, ducking, or EQ), but I'll also happily send more than one source to many of my reverbs — indeed, that's often an intrinsic purpose of reverb for me, binding the ensemble together by giving them some acoustic connection that they might not have had while recording.

To return to the aforementioned acoustic band, the bulk of the reverbs used there were being fed from several instruments at once to aid with ensemble cohesion; whereas in the mix I did for Lingua Funqa in SOS June 2018's Mix Rescue column, most of my reverbs were used on just one or two instruments at a time, because I wanted to give each instrument its own sound within the context of a more chart-oriented 'confection', which is a lot less about realism, and more about attention-grabbing variety and contrast.

So, overall, I wouldn't get too hung up counting reverbs and sends. As long as you keep the reason for using each reverb at the front of your mind, you should avoid any serious pitfalls, no matter what style you're working with.