Q. How should I configure monitor speakers that can't be placed symmetrically in the room?

I just purchased a pair of Neumann KH120A monitor speakers and am in the process of calibrating them for my room. My desk is placed in one corner of the room, which leaves me with no option but settling for an asymmetrical monitor setup: both speakers are virtually up against the wall, with the right one in a corner.The manual for the speakers recommends different monitor settings based on placement, and the bass/mid-range levels are different for corner and wall settings, which would mean I have different settings on each speaker in my situation. So my question is: can I adjust each monitor differently, or is this not recommended? 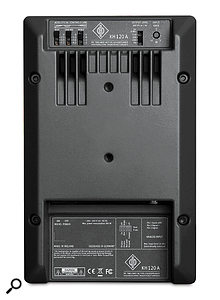 Like many studio monitor speakers, the Neumann KH120A features rear–panel switching to compensate for boundary effect bass boost — and if it's not possible to have the speakers set up symmetrically in the room, it may be that you need to set each speaker differently.SOS Technical Editor Hugh Robjohns replies: In an ideal world, both speakers would be placed in identical acoustic conditions, and would therefore have similar EQ settings — but clearly that's not practical in your current situation. If it really isn't possible to arrange the room for a more symmetrical layout, which would be preferable, you will need to turn down the bass output from the speaker in the corner to have any hope of a similar sound character from both speakers and a stable stereo image. So yes, you can have different settings, and you're going to need different settings!

As for the reason why the manual recommends different settings based on placement, it's to do with the way the speaker interacts with its nearby boundaries. If a small speaker is placed on a tall pole in the middle of an open field, it can (theoretically) radiate sound in all directions, creating an imaginary sphere of sound. However, if it is placed against a wall it can only radiate into (the front) half of the previous space, and is therefore said to be operating in 'half-space'. If placed in a corner the speaker can then only radiate into one quarter of the original sphere, hence operating in 'quarter-space'. (Some speakers have EQ switches labelled this way for the appropriate room correction response.)

The problem is what happens to the energy that can no longer radiate into the 'walled off' parts of the room. Not surprisingly, the sound energy that would have gone into the (now unavailable) parts of the sphere essentially gets reflected back off the nearby boundary wall(s), increasing the amount of sound in the available space — it's almost as if there is a second virtual speaker behind the wall (at the mirror point) throwing sound into the room as well (or two mirror speakers in the case of a corner placement!

In reality, though, the mid- and high-frequency output from a normal monitor speaker is projected forward in a fairly controlled way over a relatively narrow dispersion angle rather than a full sphere (typically 80-120 degrees or so, and often wider horizontally than vertically, by design). So it's really just the low frequencies (where the wavelength is greater than the speaker cabinet's dimensions) that tend to radiate spherically, and so placing speakers near walls or in corners tends to reflect that low–frequency omnidirectional sound energy back into the room, and hence it is the level of low frequencies that gets boosted and needs correction if the speakers are placed in half- or quarter-space (assuming they are designed to have a flat response when mounted in free space).

It's important to read the speakers' manuals, though, as some speakers are balanced to sound flat when placed near a wall in half-space (that's how many small speakers end up being used anyway, so the manufacturers sometimes take that into account) — in which case they may sound bass-light if placed well away from walls. They will still sound extra bassy (and need correction) if placed in a corner, of course!