Q. Is it possible to record in surround on only two tracks? Skip to main content

Q. Is it possible to record in surround on only two tracks? 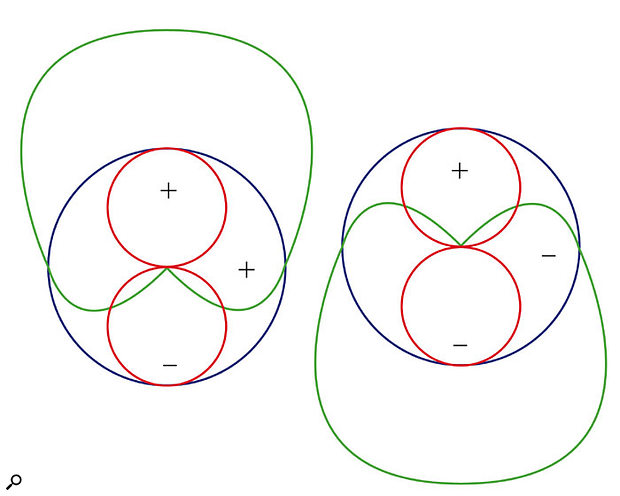 This simplified polar pattern diagram shows how a figure-of-eight mic (red) and a coincident omnidirectional mic (blue) can be combined to produce a directional cardioid pickup pattern (green). Flipping the polarity of the omni reverses the direction of the cardioid pickup.

Would it be possible to use two figure-of-eight mics to create a surround sound recording on a two-track recorder, which could be decoded and mixed later on? The two mics would be placed at 90 degrees capturing left and right and front and back respectively. I'm after a quick and portable way to make surround recordings in the field, and portable recorders with more than two inputs are expensive! As far as I can see this could work, unless there's something I'm missing about figure-of-eight decoding?

Technical Editor Hugh Robjohns replies: There is something you are missing — a third mic to resolve the ambiguity inherent in a figure-of-eight mic over which side of the diaphgram the sound strikes. You cannot derive front-to-back directional information with just two crossed figure-of-eight mics.

Imagine I'm in a studio and you are in a control room, without sight lines between the two. There is a single figure-of-eight mic in the studio and I'm talking into it. How could you tell whether I was talking into the front or back of the mic just by listening? The answer is that you couldn't — a figure-of-eight mic provides signals of identical level from front and rear sources. Yes, the polarity of the signal is inverted between front and rear sources, but without a reference to know which polarity was which, you are no better off.

If you think about it, when you combine the two coincident figure-of-eight mics mounted at 90 degrees, you effectively end up with another 'virtual' figure-of-eight pointing midway between the two original mics. You can use that to provide left-right discrimination — which allows the arrangement to be used for stereo — but you will get the same level of output from a source behind and to the right of the array as you would from one to the left front. That doesn't matter in stereo: in fact it is often very useful that rearward sounds are folded back onto the front. However, it is obviously a problem in surround because we need to be able to have rearward sounds coming out of the rear speakers! 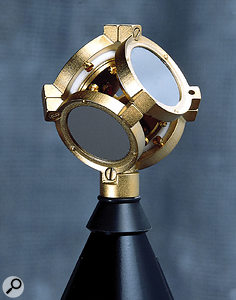 So, what we need to be able to do is create virtual polar patterns that have front-back discrimination, and that basically means creating 'virtual' cardioid patterns. These can be derived by combining an omnidirectional mic's polar response with a figure-of-eight.

If you have two coincident figure-of-eights, facing left/right and front/back, and you add to that a coincident omnidirectional mic, you can combine them in various ways to create virtual cardioid patterns pointing in almost any direction you like. Let me explain how...

Consider what happens if you mix together the output of an omnidirectional mic and figure-of-eight, the two capsules being coincident. The omni mic picks up sound from all directions equally. The figure-of-eight picks up sound only from the front and back, rejecting sound sources to the sides, and its rearward pickup is in the opposite polarity to the front.

Sources to the side are not picked up at all by the figure-of-eight mic, but the omni still hears them. So the 'virtual mic' created by the combination of the two is not as sensitive to sounds from the sides as it was from the front, but it does still hear them. 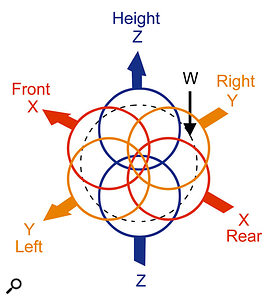 The four coincident capsules of a B-format Soundfield mic, and a diagram showing the intersecting pickup patterns of the three figure-of-eight capsules (X, Y and Z) and one omni-directional capsule (W), courtesy of Soundfield.Sources to the rear are heard by both the figure-of-eight and omni, but the figure-of-eight's output is of the opposite polarity to the omni. Hence, when the two outputs are combined they will cancel each other out. Thus the virtual mic hears nothing at all from the rear, and if you draw this polar pattern out accurately you'll discover that we have just created a cardioid microphone (facing forwards). You can also create other first-order polar patterns (sub-cardioid, hypercardioid and so on) by varying the ratio of the omni and figure-of-eight contibutions (in other words changing the gain of each).

So you see that by introducing an omni mic into the array, you can resolve the inherent front/rear ambiguity of the figure-of-eight pickup patterns, by converting them into cardioid patterns, and by adjusting the ratios and polarities of the signals from the two figure-of-eights, you can make those cardioids face in pretty much any direction you like. You can now generate any number of virtual microphone outputs which 'hear' only the sources in front of them — front left, centre front, front right, rear left and rear right, for example.

Another (arguably more practical) way of recording horizontal surround sound is the MSM format. This uses the same basic concepts, but is constructed from a pair of matched cardioids facing to the front and rear, plus a sideways-facing figure-of-eight. Again, all three should be coincident. The front cardioid and the sideways figure-of-eight are decoded as a conventional M&S pair for the frontal sound stage, while the rear cardioid and the same figure-of-eight are decoded as another M&S pair for the rear channels.

However, whether you adopt the crossed figure-of-eights plus omni approach (WXY format), or the front/rear cardioids plus figure-of-eight approach (MSM format) you do need to be able to record at least three channels, and there is no getting away from that!

If you really want to encode surround onto a two-track machine, you have to use some form of phase/amplitude matrix system like Dolby Pro Logic or RSP Circle Surround. However, while these formats are acceptable for final mixes delivered to the end user, they are far too restrictive for source recordings because you can't easily manipulate the signals to alter the spatial surround characteristics later on, as you can with either of the three-channel surround recording techniques described above.