Q. Should I buy a Headphone Amp?

I recently purchased some Sennheiser HD600 headphones and have been told that I'll need a good headphone amplifier to make the most of them. Currently, I use the headphones output of my audio interface (a Digidesign M Box 2) to power my cans, but it seems to distort at high levels. Do you think it would be advisable to get myself a headphone amp? If so, how would I get the signal to the headphone amp from my audio interface? I'm thinking of getting either the Presonus HP4, Samson's C Que 8, the CME Matrix Y, or the Behringer AMP800, mainly because the configuration of the inputs and outputs are suitable for my system. It's probably worth mentioning that I use a small Yamaha desktop mixer as a front-end to my DAW.

PC music specialist Martin Walker replies: Most audio interfaces provide fairly clean-sounding headphone outputs, although it can be tricky to predict how loud a particular set of phones can go through a particular headphone amp without sounding strained. According to the Digidesign web site, the M Box 2's headphone output can provide six milliwatts into 50Ω, and since most such amps provide less power into higher impedances such as the 300Ω of the Sennheiser HD600s, a dedicated headphone amp might help you gain increased level while helping your new headphones to sound as clean as possible. 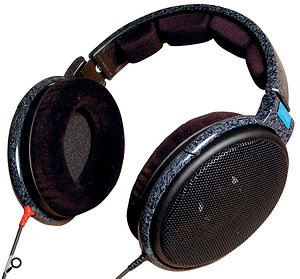 Sennheiser's HD600 (right: reviewed in SOS June 2002) are open-backed, reference-quality headphones. They are renowned for their wide and spacious sound, but are at their best when used with a good headphone amplifier, such as the Grace M902 pictured below.

However, the models you propose all have four headphone outputs, which is fine if you need to plug in four pairs of headphones (so that an entire band can monitor simultaneously, for example), but is not so suitable if you simply want to get higher audio quality for your single pair of Sennheisers. It sounds as though the latter is the case, so you simply need to get hold of a single stereo headphone amp and connect it between the stereo outputs of your audio interface and the inputs of your Yamaha mixing desk. By spending your money on this one headphone output you should be able to get better audio quality than spreading it across four.

I say 'should', but, unfortunately, while there are lots of handy multiple-output headphone amps at budget prices, once you start looking for high-quality, single-output headphone amps the prices tend to shoot up alarmingly. The Sennheiser HD600s are superb headphones, and some people are prepared to spend over £1000 on a headphone amp to get the very best out of them. Take the Grace M902 (www.gracedesign.com), which I mentioned in my January 2007 feature on headphone mixing (www.soundonsound.com/sos/jan07/articles/mixingheadphones.htm). It costs £1400, but is far more than a rudimentary volume control. Another widely recommended amp is Graham Slee's Monitor Class model, which costs £475 (www.gspaudio.co.uk). Of course, you may still consider this 'silly money'.

I've scoured the Internet trying to find a reasonably priced headphone amp to use with my Sennheiser HD650's, since it seems bizarre to end up paying several times more than the cost of your audio interface just to improve slightly on its integral headphone output. But while there are plenty of audiophile products with prices to match, there currently seem to be few products available to suit more modest budgets.

One possibility is Creek's OBH21 (www.creekaudio.co.uk), which retails at £190. I haven't auditioned it myself, but I know of happy HD600/650 owners using this model. Another is the Rega Ear at around £150 (www.rega.co.uk/html/ear_2001.htm), which, again, is used by many HD600/650 owners, while the Pro-Ject Head Box Mk 2 (www.sumikoaudio.net/project/products/headbox2.htm) seems a bargain at £75 (yet still wins awards for its audio quality compared to the average headphone socket found on a hi-fi amp), and will deliver 60 milliwatts into 300Ω phones, or 330 milliwatts into 30Ω models, which is a lot more than the M Box 2! What's more, it has additional line-level outputs that you could connect to your mixer.

The Pro-Ject Head Box Mk 2 is available from local hi-fi shops or can be bought on-line (in the UK) from various retailers, including Noteworthy Audio (www.noteworthyaudio.co.uk), Stone Audio (www.stoneaudio.co.uk), or Superfi (www.superfi.co.uk). Readers in the USA seem to benefit from a much wider selection of indigenous products. Visit Head Room (www.headphone.com), and you'll find a huge range of headphone amps.