Q: Should I mix on high-end headphones or low-end monitors? Skip to main content

Q: Should I mix on high-end headphones or low-end monitors?

I don't really want to get into a discussion about whether or not you should mix on headphones, but I'm wondering whether I'd be better off with a pair of Sennheiser HD600 (or similar) headphones instead of some low–end monitors? At the moment my 'studio' is just the corner of my bedroom and there's a huge peak around 150Hz, so it's not ideal for mixing. My current monitors are Blueroom Minipods, which are not the best thing for monitoring. So most of the time I mix on Sennheiser HD497s and check later on the monitors. 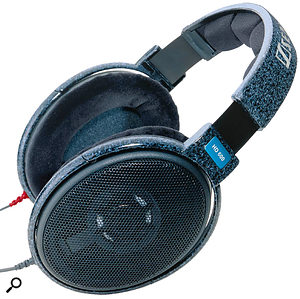 Sennheiser HD600s are well respected, and are often used for critical listening. They'll yield better results on a mix than a pair of poorly placed or indifferent–sounding speakers, particularly if your listening environment is compromised. There are certain considerations to bear in mind when mixing on headphones, however.The problem is that my mixes are not really as good as I would like them to be, so I'm just wondering what the next step should be. (I don't think the missus wants bass traps on top of her bed, by the way...) So, basically, the question is: what monitors should I be looking for in order to have something better than mixing on, say, a pair of HD600s and checking on the Minipods?

SOS contributor Mike Senior replies: I'd rather mix on a good pair of headphones than a similar–priced pair of (especially ported) speakers any day of the week, especially in a dodgy–sounding room. The Sennheiser HD600s are a very well–respected choice in this regard, and should seriously outclass your HD497s, in my opinion. However, the way that headphones place phantom central images 'inside' your head, and the lack of crosstalk between left and right channels (as in loudspeaker listening), can make it a bit tricky to judge panning and balance between the instruments. Gauging the low–end response will also be tough, as headphones simply can't generate the same physical sensation as the low frequencies emerging from loudspeakers.

A little temporary acoustic treatment should allow you to use your existing monitors to judge panning and stereo imaging, so working around that aspect of headphone mixing shouldn't be too much of a concern. However, in your position I'd probably invest in an additional mono 'grotbox' (such as the Avantone Mixcube or Pyramid Triple P, perhaps), which should give a more reliable impression of the balance of the instruments than either the headphones or Minipods are likely to provide — it won't sound nice, but that's not the point of it — and will also confirm mono compatibility. 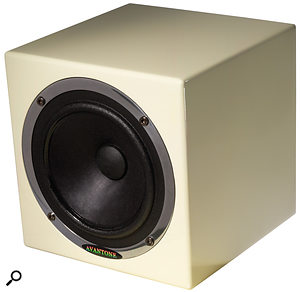 A single 'grotbox', such as this Avantone Mixcube, will give a better idea of musical balance than headphones or unsuitable monitors. 'Grotboxes' are useful in all studios, large and small.The bass problems are more difficult to work around, however. The HD600s are very good in this respect (especially if you make sure to reference your mix against commercial tracks), and could be supplemented with a software spectrum analyser (such as Roger Nichols' Inspector), but I'd still advise checking the low–end response somewhere else if possible. Even spending lots of money on new monitors won't help you here, if your room sounds rubbish at the low end. If you can't check mixes elsewhere, sources with mainly high–frequency and mid-range content, such as guitars, vocals and drum overheads, can be high–pass filtered. Try, also, to keep a tight grip on the dynamics of remaining low frequencies. For more headphone mixing tips, see the 'Mixing On Headphones' feature in SOS January 2007, which includes links to plug–ins that simulate loudspeaker listening on headphones.