Q. Should I upgrade to a Mac Pro for more Firewire ports?

My Macbook Pro has run out of grunt for what I'm doing, so I am considering upgrading to the iMac i7. However, I have a dilemma regarding the single Firewire port on that model. I want to use the system drive for Logic and a 2TB Firewire external drive for recording, sample libraries and storing projects. I will also use an external USB drive for backup. I don't tend to record more than two channels simultaneously through the interface, which is the TC Electronic SK48. TC Electronic advise you to use the SK48 on a dedicated Firewire bus (perhaps to prevent the risk of problems if streaming multiple channels simultaneously). I do all my mixing in the box and have relatively high track counts (approximately 60), along with high plug‑in counts. I don't want to shell out for a Mac Pro just to gain an extra Firewire port. Can you give me any advice on daisy‑chaining my interface to an iMac via a Firewire drive and whether I should be considering the move up to a Mac Pro? 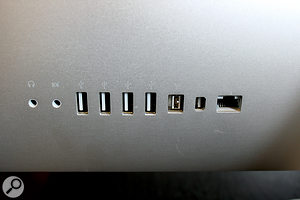 Though the iMac used to have two Firewire ports, the new i7 only features one. This may prove a problem for those using lots of Firewire devices, but at least the four USB ports offer alternative connectivity.

SOS Reviews Editor Matt Houghton replies: I think the answer may be far more straightforward than you think! I'm unclear as to whether you already possess the drives you're talking about, but there's plenty of connectivity on the iMac i7: you get four USB 2.0 ports, one FW800 port and a Gigabit Ethernet port. So if you were setting up from scratch, it would allow you to run your Firewire audio interface and four separate external drives over USB, without any sharing a port.

If you need to use the drives you've mentioned in the question then, personally, I'd be happy to try daisy‑chaining the Firewire drive and the TC interface. I presume that you don't have all 60 channels of audio streaming all the time (that's likely to be one muddy mix!) but, even then, while there are no guarantees, it could well work. If it doesn't, you could try swapping the drives over, putting what is currently your Firewire drive in the USB enclosure, and vice versa, so your Firewire drive becomes the backup. You could also try splitting the read‑write burden between different drives, with samples on one, audio on another, and so on.

I'm conscious that some people have reported that USB drives have been too slow for their audio work. I tend to use a lot of external drives — both USB and Firewire — and I've never, personally, experienced huge problems running even the busiest mix from either type (my day‑to‑day one is a USB2 drive) with Mac or PC. However, if you do find that you need a faster drive and aren't able to use the Firewire connection, you could consider adding a hard drive that connects via the iMac's Ethernet port (assuming you don't plan to use that for anything else).

Of course, if you think you might need to expand the system further with DSP accelerator cards, you really do need to think about a more flexible setup, which is where the Mac Pro option really comes into play. Personally, I'd opt for the Mac Pro simply for the flexibility. I'd never feel that confident that my needs wouldn't change and, if I wanted faster, higher bandwidth drives, I'd be able to upgrade with a USB3 card when the time was right. On the other hand, there's no such thing as future‑proofing in the world of computers and, as you do almost everything inside the box, I reckon you should be able to get a perfectly good setup, with several external drives, based around the iMac i7.