Q. Should I use an active or passive mic splitter? Skip to main content

Q. Should I use an active or passive mic splitter?

I use an ART S8 eight-channel mic splitter, a passive device, to send mic signals to two separate recording systems (a Focusrite 828 preamp paired with an RME UFX interface, and an Audient ASP800 preamp paired with a Focusrite 18i20 interface). The manual for my Schoeps CMC65 mic cautions: “If one microphone must be connected to multiple inputs simultaneously, an active microphone splitter should be used in order to preserve the loading and powering conditions for the microphone and to prevent interference.” Should I ignore this at my peril? 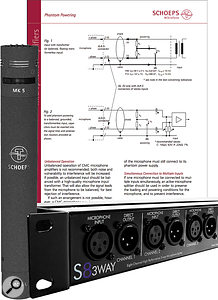 The Schoeps manual warns of the evils of passive mic splitters for a good reason — but the ART S8 and similar single-split transformer devices shouldn’t pose a problem.

SOS Technical Editor Hugh Robjohns replies: In an active splitter, the mic feeds a single mic preamp and is powered in the conventional way. The output of the mic preamp is distributed by whatever means to feed the multiple outputs — but the mic ‘sees’ none of that; it’s only concerned with feeding its individual mic input stage. This allows the mic to work as intended and avoids ‘loading losses’. The potential downside is that the preamp in a splitter may not reach the standards expected of a high-end preamp, especially in terms of equivalent input noise. Bear in mind that splitters are generally specified for live-sound situations, where the ultimate in preamp quality is rarely expected (or needed).

There are two kinds of passive splitters. The first, cheapest and nastiest — and the type Schoeps are particularly concerned about — is a simple parallel wiring of an input XLR to a bunch of output XLRs. In this situation, the load impedance seen by the mic is the parallel addition of all the destination input impedances, which will inherently be a lot lower than a conventional single mic input. (Halved for two destinations, a third for three, and so on...) The resulting very low input impedance seen by the mic is likely to result in severe headroom and transient distortion issues, as well as a low output level caused by the ‘loading losses’. There is also the confusion over paralleled phantom-power supplies and equipment ground loops, potentially causing interference issues as well...

A passive transformer splitter, on the other hand, is a traditional and much safer situation. In general only one of the splitter outputs is allowed to pass phantom power to the input, so that solves the multiple phantom power-source problem straight away. All but one of the outputs are usually floating, so that removes the risk of ground-loop problems too. A good mic-split transformer will have multiple Faraday shields to minimise any risk of mutual interference, and good magnetic screening too.

So yes, an active mic-splitter is the ideal and preferred solution, if possible. A good-quality transformer splitter with just two outlets and with sensible grounding arrangements — such as your ART S8, for example — is the next-best option. But avoid hard-wired parallel splits unless you really know what you’re doing and what equipment you’re using it with!