Q. Should we use software or hardware for recording live gigs? Skip to main content

Q. Should we use software or hardware for recording live gigs?

I'm in a band and we want to start recording our live gigs and rehearsals to multitrack, but we don't know which way to go in terms of both hardware and software. With so much choice and so little knowledge, we are confused. We have a decent budget but not enough to stretch to a 24-channel Pro Tools HD system. Ideally, we'd like a system that we can mix on, as well as record on, but the former isn't crucial, as we already have a PC with Cubase SL for mixdown purposes.

We generally use up to 20 channels: all the usual rock-band stuff, including a full drum kit. We have been told that the best way with live gigs is to split the lines on the stage with an active splitter, which we're happy to do, but if there is a simpler option we're open to suggestions.

Features Editor Sam Inglis replies: In a sense, I'd say the actual choice of a recording system might be the easiest part of this decision. For your needs, there are basically two ways you could go. One is to get a stand-alone 24-track recorder such as the Mackie SDR24/96 or Alesis HD24. The other is to choose a PC or Mac with recording software and an interface that is capable of accepting 24 analogue inputs simultaneously. 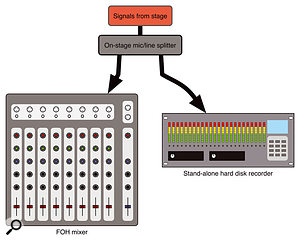 This diagram shows on-stage splitting of signals, for simultaneous recording and mixing on separate systems. This is the most reliable method, as it is not guaranteed that a venue's FOH mixer will have sufficient outputs to feed the hard-disk recorder. If you already have a PC that you can use for mixdown, the simplest option would be to go down the hardware route and opt for something like the Mackie or Alesis. You can simply leave it to record the entire gig, then hook it up to the PC later (via USB or Ethernet) and dump all the files into Cubase SL for mixing. Such a system should be perfectly stable, reasonably portable and generally hassle-free, unlike many PC-based rigs.

The question of how to get signals from the band to the recording system is a bit more of a thorny one. The ideal is, indeed, to use on-stage splitters for each signal, but this will be expensive and isn't always practical, plus you'll probably need another mixer or multi-channel preamp to get the signals into your recording system. The alternative, if it's possible with the venue or rehearsal room you use, is to take direct channel outputs from the front of house (FOH) mixer, in which case you should get away with just using a 24-way loom between mixer and recording system. This, of course, depends on the FOH mixer actually having individual outputs for each channel, and on those outputs not being used for something else. (In both cases, you should also look into setting up at least one mic in the audience, in addition to the ones that are being used for the band.) Bear in mind that an unbalanced insert point — typically in the form of a TRS socket wired for 'Y-lead' use, and a live sound engineer's favourite trick — wouldn't really be suitable here, as you'll almost certainly encounter some kind of interference, potentially compromising your recording.

Either way, I'd say the most important thing to do is to talk to the live sound engineers at the venues you'll be playing. If you're planning to make a multitrack recording of a gig, the venue and the engineer absolutely have to know about this well in advance, and you may have to do quite a lot of persuading to get them to agree (as it will be extra work for them).

While we're on the subject of recording live bands, it's worth checking out some of our recent articles on the topic: SOS July 2007 contains a masterclass on recording loud bands, live in the studio (view the article on-line at www.soundonsound.com/sos/jul07/articles/loudbands.htm), while the Live Folk article in SOS August 2007 (www.soundonsound.com/sos/aug07/articles/livefolkrecording.html) shows you how recording live music in a real venue can be successfully achieved.