Q. What is the best way to mike up a clarinet? 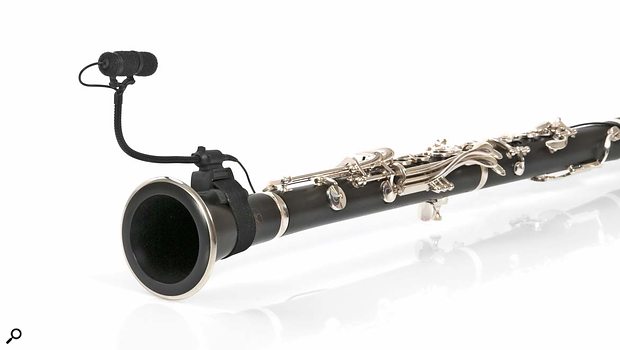 I'm in need of some help and advice. I was working with a group at the weekend who have a wind player in their line-up. She alternates between flute and clarinet. I had no trouble miking up the flute, but when it came to the clarinet I just could not get a signal that would cut through the mix, despite using a second mic. The mics I was using were a JTS small-diaphragm condenser (cheap but usually effective) and a Shure SM58 pointed towards the bell of the instrument, but slightly off-axis. I have spoken to another engineer who has also worked with the group and he confirms that he also had problems with the clarinet. Any suggestions?

Technical Editor Hugh Robjohns replies: The clarinet has the widest dynamic range of any orchestral instrument, so it's no wonder you had problems! First of all, don't try placing the microphone anywhere near the bell. Most of the sound of the clarinet comes from the unstopped finger holes, so if you focus on the bell you'll be missing 70 percent of the instrument's harmonic range. Instead, you need to place a mic where it can 'see' the entire body of the clarinet.

Try placing the small-diaphragm condenser mic about a foot away and aiming more or less at the lower hand position. You can experiment with the height, angle and distance of the mic until you find a balance you're happy with, but it may also be worth having a quiet word with the player to explain the problem, in order to extract a more appropriate performance in terms of dynamics and consistent positioning relative to the mic.

In a live situation, miking may be more difficult because of spill, feedback or over-exuberant performers, amongst other things. If so, you might find it easier to use a clip-on instrument mic. There are lots on the market that will hold a small mic in a reasonable position and keep it there regardless of the gyrations of the player.