Q. What do sample players do, and why do we need them?

I've been thinking about buying some sample packs, as I've read reviews of some that sound really interesting. However, a lot of them require specific players, such as Kontakt and Elastik. Can you explain to me what these players are for? Can I not just load the content directly into my DAW?

SOS contributor Martin Walker replies: There certainly are sample collections that are just that: a set of audio files that you can load into any DAW or audio editor, and this is the simplest and most appropriate format for some material. However, the problem with WAV or AIFF‑format samples is that if they don't come exactly as you need them, you may need some work to fit them into your songs. For instance, let's say you buy a pack of drum loops, and you really like one that runs at 135bpm, but you want to use it in a song that is at 128bpm. To make it fit your new tempo you'll have to use an audio time‑stretching function — assuming your DAW offers one of high enough quality, that is. Or say you want to use a bass riff that's already at the correct tempo, but is in the wrong key: this time you'll need to use pitch‑shifting, and, once again, you'll be relying on the quality of the algorithm to keep your riff sounding as similar as possible to the original when it's been transposed.

Sampled instruments may feature multiple samples for each note to capture all the changes in timbre, from low notes to high notes, and soft ones to loud ones. Once again, you could build up tunes by dropping samples of individual notes into your song at the appropriate times. But wouldn't it be easier if you could just play the appropriate notes on a musical keyboard and have some software choose the correct samples for you?

This is essentially what a sample player does: it takes care of all the behind‑the‑scenes selecting of samples from the set, plus any time-stretching or pitch-shifting needed, so that samples can be 'stretched' across the keyboard as required. Most also offer tempo‑sync functions so that drum loops, for example, get automatically stretched or squashed to lock to your song's timing.

Every sample player offers these basic features, and most modern ones can stream all that sample data from your hard drive as and when it's needed, so you can access many gigabytes of sample data in a song without needing to load it all into your DAW at once. 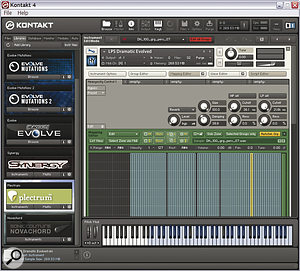 A sample player (such as NI's Kontakt 4 shown here) does a lot more than play back samples. In this library from Heavyocity we can see how lots of samples have been mapped across the musical keys so you can easily play them in combination, while a set of custom controls has been specially programmed to tweak them to your taste.

Many sampler 'engines' also offer their own unique sets of extras, such as filters that change the timbre of samples over time, envelopes that enable you to change the attack or decay times of each note, and effects such as reverb. They may also offer customised graphic interfaces for each instrument and special performance features (such as 'round robin' sampling of instruments, so that each time you play a note it sounds slightly different, just as real acoustic instruments do).

So there is often a huge amount of difference between auditioning the raw samples and hearing the end result via a sample player 'engine'. By supporting a specific sample player, a developer can not only use its special features, but may also get some protection against piracy by having their library specially keyed to a serial number or licence, whereas collections of samples can never be protected in this way.

Some developers do release their products across a range of formats, but the more special features of a specific sample player they use, the more likely a product is to only be released on that single format. However, most sample players, including NI Kontakt, Steinberg HALion, Ueberschall Liquid/Elastik and Yellow Tools ENGINE run on both Mac and Windows and within the majority of sequencer applications.