I don’t understand what the ‘Thrust’ control on my Waves API 2500 compressor plug-in does. I assume it’s the same as the hardware, but is it just marketing-speak for ‘side-chain EQ’ or is there more to it?

SOS Technical Editor Hugh Robjohns replies: The short answer is ‘yes’ in that it is just a side-chain EQ, but there’s actually a little more to it than that, as the detail of the equalisation is critical to its success and usefulness. 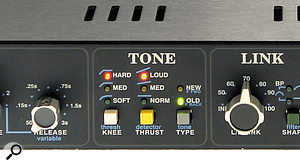 The Loud setting for the API 2500’s ‘Thrust’ EQs the side-chain signal to add 3dB per octave — which is the inverse of the response of pink noise. To find out what’s so special about this response, check out Eddie Bazil’s article on mixing to a pink noise reference in SOS December 2014.In essence, API’s Thrust circuit places a low-cut and high-boost equaliser into the audio signal that feeds the side-chain detector circuit. As you suggest, this is not an unusual concept; many compressor manufacturers include some kind of high-pass filter in the side-chain, with the specific aim of reducing the tendency of high-energy, low-frequency elements to dominate the control of the compressor too much. The benefit of this simple high-pass filter approach is to allow a louder overall volume with a stronger mid-range, while still retaining a well-controlled bass. In contrast, if the side-chain is not ‘desensitised’ to the high-energy bass instruments, the risk is audible pumping and a perceived loss of mid-range punch, because only the bass instruments tend to determine the compression level, rather than the mid- or high-frequency elements. 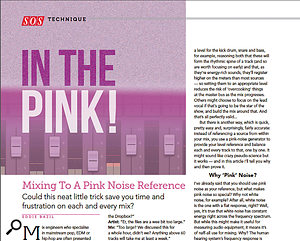 API’s Thrust filter is an extension of the same idea, but the cleverness is in choosing the precise nature of the side-chain equalisation. The Loud Thrust filter option is the simplest to understand, as it is a linear equalisation slope that rises at +10dB per decade (which is +3dB per octave) from below 20Hz to above 20kHz. That +3dB per octave number is important because it is the precise opposite of the falling -3dB per octave spectral balance of pink noise. Pink noise is ‘special’, of course, because its spectral balance maintains equal energy in each octave band — a condition that gives a very natural-sounding spectral balance to our ears. (See Eddie Bazil’s SOS December 2014 article on setting a rough mix by comparing source tracks with pink noise.)

So, the effect of API’s Loud Thrust filter is not only to ‘desensitise’ the compressor to low-frequency elements so that they don’t dominate its action, but to do so in such a way that each octave band across the entire audio spectrum actually ends up with an equal amount of energy. This ingenious approach ensures that the naturally lower-energy mid- and high-frequency elements are given a ‘much fairer’ opportunity to determine the action of the compressor, with the result being a far more ‘punchy’ sound with a powerful mid-range and well-balanced high frequencies. It also tends to be perceived as a less compressed sound (for a given amount of overall gain-reduction) than that of a typical compressor working with a flat-response side-chain.

The Medium Thrust option on the API 2500 is a more complicated variation on the same theme, the key difference being that is has a flat response across the mid-range (between about 200Hz and 3kHz), but with the same +3dB per octave equalisation slopes below and above those corner frequencies. Naturally, the flat section reduces the ability of the mid-range to control the compressor slightly (compared with the Loud mode), although the compressor is still desensitised to high-energy low frequencies, and has increased sensitivity to the high-frequency elements. The third option is labelled Normal Thrust and this mode simply removes all of the equalisation from the side-chain, so that the compressor has a perfectly flat response and equal sensitivity at all frequencies — the same as all standard compressors. The choice of using Loud or Medium Thrust mode is primarily one of personal preferences, but also depends on the nature of the material being compressed and, in particular, the balance of mid-frequency components in comparison to the highs and lows.