As far as I can see, if the noise and distortion figures are adequately low, the only obvious difference between microphones must be in the frequency response. I've looked at a number of mic frequency response plots and most seem straightforward enough to approximate with a multi-band parametric equaliser, so wouldn't it make more sense to buy the flattest mic available and then use EQ to make it sound the way you want? In fact, isn't this more or less what mic modelling software does?

SOS Editor In Chief Paul White replies: Although the frequency response is a large part of what makes microphones sound different, it isn't the only factor. Furthermore, the published frequency plots are often smoothed so as to present the general shape of the mic's response without small peaks and dips confusing the issue. If you look at the actual 'detailed' response plot — which some high-end manufacturers still plot for each individual microphone, but many more affordable brands now don't — you'll see that there are numerous more subtle ripples and bumps in the response. These are usually caused by reflections within the housing around the capsule, which results in resonant peaks or cancellation dips at certain frequencies. These contribute to the overall tonality of the microphone, but there are still more factors at play, such as the natural resonant frequency of the diaphragm assembly and, very importantly, the way the frequency response changes when the mic is used off-axis. 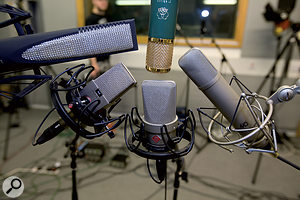 Can one mic be made to sound like another using EQ, or are there more fundamental differences?

In theory at least, you could use equalisation to replicate the on-axis frequency response of a particular microphone and also to introduce any frequency-related phase anomalies. Indeed, this is at the heart of how mic-modelling software works. Such an equaliser needs a lot of bands to be accurate, though, so a digital solution is the only practical option. It's also possible to use modelling to approximate the saturation characteristics of any valves and transformers used in the mic's circuitry.

However, there's currently no way to model the off-axis response of the microphone; that will always follow the behaviour of the actual mic you're using. In a real-life recording situation, a mic picks up not only the direct sound from in front of it, but also a degree of reflected sound which arrives off-axis. This reflected sound is thus coloured by the mic's off-axis response. What this means in practical terms is that even the best mic-modelling software can only get close to the sound of a particular mic being used on-axis in an acoustically dead space. The more live the environment, or the more sound arriving off-axis because of the width of the sound source, the less accurate the modelling process will be.

Sometimes, equalising a flat mic or using modelling software to make one model of mic sound more like another will give subjectively usable results. But in my experience such methods fall short of capturing the elusive magic of a really good microphone — and while it may be possible to make a really accurate mic sound near enough like a less well-specified model, I've yet to hear any processing that's been able to make an average-performance budget mic sound like a high-end model. A really good mic has a sense of focus and for me that's what processing can never put back if it doesn't exist in the first place.