Q. What pan-law setting should I use? 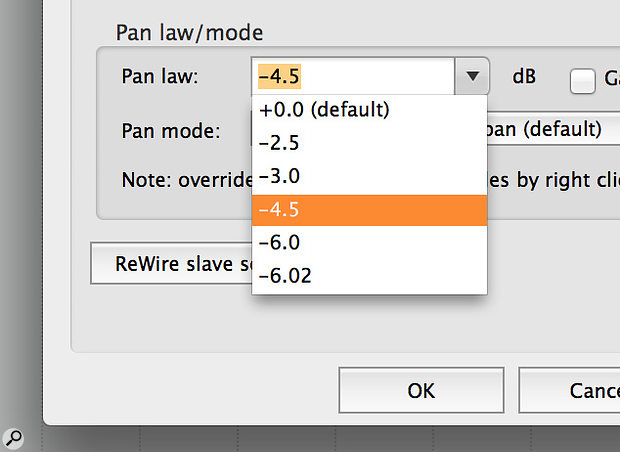 If in doubt, a pan law of -4.5dB offers the best of both worlds.

Please can you explain what is meant by ‘panning law’ in the context of a DAW’s setup and what pan-law setting should I use?

Technical Editor Hugh Robjohns replies: Some mixer and DAW pan controls work by attenuating the level of both left and right output channels as the pan control is moved towards the centre. Others work by raising the level of one channel as the pan moves towards that side. The perceived effect is much the same, but the absolute levels obviously differ, which can be significant in some situations! The amount by which the signal level is altered is referred to as the ‘panning law’, and there are two fundamental approaches with quite different aims and results.

However, the actual panning law only really becomes significant when a source is being actively panned across the soundstage and you want your audience to perceive the source as remaining at a constant level as it moves around. For any given static pan position you have to balance the source in the mix accordingly, and if you change the pan position you’ll inevitably also change the relative level of that source slightly and so will probably have to tweak the source level to maintain the same overall mix balance.

The two fundamental panning laws relate to the way the material will be auditioned. If you want the panned sound to be perceived, acoustically, as remaining at a constant volume regardless of the pan position, then the centre attenuation needs to be 3dB. This is because the acoustic summation of two identical signals increases the perceived volume by 3dB. So this is the law to choose if your audience will only ever listen via stereo loudspeakers.

However, if you want the panned sound to be perceived as having a constant level when summed to mono, the centre attenuation needs to be 6dB, because the electrical addition of two identical signals creates a new signal with an amplitude which is 6dB larger. So this is the law to choose if your audience is likely to hear a mono sum, such as when broadcast on radio or TV, or in a club, or on a mobile phone or tablet.

Most mixing consoles and a great many DAWs employ a compromise option of 4.5dB centre attenuation, which is half-way between the two previous ideals. The idea is to present a very reasonable compromise with only minor level variations as a source is panned across the sound stage, regardless of the listening format.

Most DAWs offer all of these options and allow the specific panning law (ie. centre attenuation) to be selected to suit the application. However, not all DAWs default to the same starting mode, which is one common reason why mixes constructed on different DAWs but with apparently identical fader and pan control settings can sound subtly but noticeably different.