Q. What release settings should I use on a limiter? Skip to main content

Q. What release settings should I use on a limiter?

Although I have been producing for a while, I still don't know exactly what release setting I should be using, especially on a limiter.

I understand the concept behind a release setting (the time that it takes the effected transients to get back to their original status before the limiter or compressor was effecting them), but I am not sure how this affects the overall sound of the element being compressed/limited.

For example, on a master limiter I tend to go for maximum loudness. So, it would make sense that a short amount of release would be suitable in order that the level can quickly return to being, well, loud!

Also, is it true that, when the release is longer, the effect of the limiting is less noticeable? That would mean that you could push the track into the limiter harder without noticing the effect and get a louder mix.

SOS Technical Editor Hugh Robjohns replies: The ethos of listening and making decisions based on what you hear is great, and is undoubtedly the way an experienced professional will work, but it helps a lot if you understand the principles and the technicalities of what's going on.

The basic aim of any kind of compressor or limiter is to turn the level down when the audio signal exceeds a certain threshold. How much it gets turned down depends on how far above the threshold it is, in combination with the ratio setting.

How quickly it gets turned down depends on the attack setting, and how quickly or slowly the attenuation is restored to zero (the level returned to normal) depends on the release or recovery setting.

So, just concentrating on the release control, different types and designs of compressors have different time ranges, and the release response also varies with different designs. Some are entirely linear, some are logarithmic or exponential and some are multi‑rate: these factors account for part of the reason why different compressors and limiters sound different, and is why you might choose one model over another for specific situations. 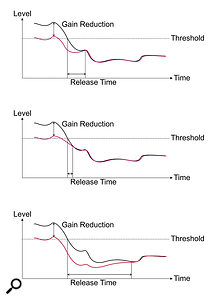 Top - The input signal is shown in black and the gain-reduced output signal in red. With a medium release time, when the input signal falls below the threshold the gain is gently restored to normal. Middle - With a very fast release time, the gain reduction is removed very quickly, and this rapid change of dynamics is perceived as adding loudness. However, where there is a relatively obvious noise floor the rapid change in ambient noise level will be obvious and may be distracting. This is called 'noise pumping'. Bottom - With a very slow release setting, the restoration of the original level is very slow and gentle and may well go unnoticed, so the process can be very subtle and transparent. However, a brief loud transient will cause the signal to be attenuated heavily, and since it will then take some considerable time for the gain reduction to be removed, the following audio will be suppressed inappropriately. This effect is known as 'punching holes' in the audio.At the simplest level, the human ear/brain responds to change: the faster the change, the more we like it or the more we are aware of it. For that reason, faster release times tend to make the material sound louder, and slower ones tend to make it sound quieter and duller.

Try a simple experiment using a voice track, speech from Radio Four, for example. Set your compressor up with a 3:1 ratio and the threshold such that it is working reasonably hard (6‑8dB of compression, much of the time). Now adjust the release control from one extreme to the other and notice what that does to the sound. You should find that at the fastest it sounds louder than at the slowest, even though the peak levels will remain the same.

From that, you might think that everything should be processed with a fast release but, as always, there are down sides. A fast release dumps the gain reduction quickly when the transient peak has passed, and so the subsequent audio is louder and we perceive the whole thing as being louder. But if there is a significant background or ambient noise, we will become aware of the background level jumping about in an unnatural way, an effect called pumping. This may be a very undesirable and distracting side affect, or it may be just the effect you're seeking!

As was mentioned earlier, there's also the risk that too fast a release setting may result in the compressor trying to follow the amplitude waveform of low‑frequency signals, resulting in audible bass distortion.

At the opposite extreme, a very slow release causes the compressor or limiter to act more like an automatic gain control, more like someone riding the fader gently to smooth out level variations. This gives a very gentle and natural level control, but tends to sound duller and less exciting. Also, if there is a sudden, large and unexpected transient peak, a lot of gain reduction will be applied and it will take a few seconds for the level to be restored to normal. In effect, this scenario will 'punch a hole' in the audio, making the following audio hard to hear. Again, this may be very undesirable, or a useful attribute, depending on the circumstances.

In general, then, the ideal would be a fast release for very loud but brief transients (to avoid punching holes and to retain the impression of loudness), and a slow release for modest peaks, so that a more gentle and subtle level control is applied. This is basically what the dual‑slope and auto‑release settings usually try to achieve, and you can often see it in practice if you observe the gain‑reduction meter. You'll see the meter flick down and back part of the way quickly for a brief transient, before slowing down significantly as it gradually releases back to zero.

In general, a limiter is intended to deal with brief high‑level transients and so tends to be equipped with much faster attack and release time ranges than a compressor, which is usually intended for more overall level control.