Q. What sort of double glazing do I need? Skip to main content

Q. What sort of double glazing do I need?

SOS Editor In Chief Paul White replies: Modern UPVC double glazing can be very effective in reducing sound leakage, though older systems may not work so well, for a number of reasons. Double-glazed units work well at reducing sound leakage because they combine an airtight seal with a window assembly that includes an air gap between the two panes of glass. This reduces the amount of sound energy transferred from the inner sheet to the outer one — but it's still not perfect, because the trapped air between the panes still transmits some sound energy. This double-layer-with-gap arrangement provides better sound and heat isolation than one thicker sheet of glass, though. The heavier the glass and the wider the air gap, the more effective the sound isolation. 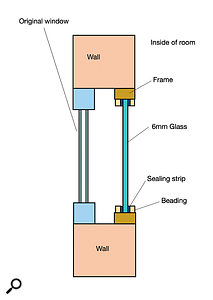 A simple DIY glazing panel with a large air gap can be very effective in reducing noise.

Early double-glazed units invariably had a smaller air gap than the newer type, which might explain why your window isn't isolating as effectively, and it's also quite possible that the seals on your window have deteriorated with age. This requirement for an airtight seal is often overlooked (doors with gaps underneath and so on), and in my own studio I initially had a noticeable amount of sound leakage due to sound passing through the studio toilet's cistern overflow pipe! I have since changed the plumbing to the more modern type with an internal overflow arrangement, and blocked the old pipe, but this serves to illustrate that what might seem to be an insignificant opening can actually leak more sound than you might imagine. Even an open keyhole can compromise an otherwise well-designed door.

It follows, then, that where a window is not absolutely airtight when closed, sound will simply leak around the edges of the opening section. It can also be the case that large one-piece windows can resonate, allowing sound to pass through more easily at certain frequencies, so having a window comprising two or three separate sections may be more effective than a large one-piece window.

If you can get your original window serviced to restore the seals to their former glory (and also check that there are no gaps between the window frame and the wall into which it is fitted), then adding another layer of thick glass (or heavy perspex) at some distance from the first can work extremely well, as the much larger air gap will make the isolation considerably better and you should notice rather less low-frequency leakage. You could even seal the original window with silicone sealant, to prevent it opening and to ensure that it is airtight, if you don't need whatever you do to be easily reversible.

I did something very similar in my own studio, in which a standard double-glazed unit was already fitted flush with the outer face of the wall in the usual way. I added a sheet of 6mm glass, fixed into a frame which I fitted to the inner face of the wall, leaving an air gap between this and the existing window of almost the full thickness of the wall. I used a simple wooden frame with self-adhesive neoprene draught excluder between the glass and the wood on either side to produce the required seal (see diagram). This is something that's well within the capabilities of anyone who can handle basic DIY.

The downside to this approach is that you will no longer be able to open the window — unless you arrange for the inner glass and its frame to be removable. However, commercial secondary glazing products, many of which are designed to open, tend to be much less effective because they rarely produce a perfect seal, and they also use thinner domestic glass, rather than the 6mm thickness recommended for this application.

In a commercial studio, the windows normally comprise much heavier glass than you would find in domestic double glazing, and it's also common practice to combine different thicknesses of glass so that the resonant frequencies of the two sheets don't coincide. That's especially important in control-room windows, which are usually large and may only comprise one piece of glass per side. The two pieces of glass may also be angled to control internal sound reflections. There's really no advantage in triple glazing when building a window from scratch; adding another sheet of glass in between two widely spaced pieces simply trades one large air gap for two smaller ones, which can actually reduce the isolation at low frequencies. In your case, however, the existing double-glazed unit is relatively thin compared with the wall thickness, so adding that extra-heavy glass layer on the inside of the wall will make a very significant difference. One final tip is that to prevent the windows steaming up, you can place a few bags of silica gel (dry them out on top of a hot radiator for a few hours first) in the gap to mop up any trapped moisture.

If you need still to be able to open the window, then forget the extra inner glazing and just fit a more modern double-glazed unit with the widest possible air gap. I haven't noticed much difference in isolation between the various brands, as the sealed-unit glass assemblies tend to be pretty similar (assuming the same-width air gap), and that's where most sound leakage still occurs.