Q. What sort of soldering iron do I need? 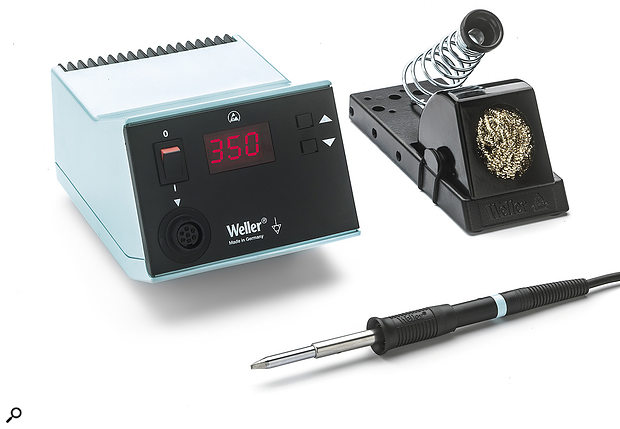 Weller make excellent soldering stations, but they’re probably overkill for an occasional audio-electronics hobbyist. Note the cleaning pad included in this model — those made of metal shavings such as this are kinder to your soldering iron tips than the cheap sponge ones that come with many budget irons.

I want to teach myself to solder properly for some DIY audio electronics projects, and more mundane tasks like mending cables. I’m a bit baffled by all the choices of soldering iron available, the sort of Wattage I would need, whether fixed temperature or variable temperature is better, whether a butane gas blowtorch design would be any better, and so on!

I don’t really want to spend any more than £50$60, though I don’t have to buy new: eBay has plenty of second-hand options in a variety of conditions. I also fully intend to practice on some old PCBs first before taking the plunge on a real project. Any advice would be greatly appreciated.

SOS Technical Editor Hugh Robjohns replies: Butane-powered soldering irons are great for emergency repairs at a gig, but far from ideal for DIY builds. In terms of power, 50W is generally sufficient and I’d definitely advise a temperature-controlled iron — or ‘soldering station’ as they like to call them nowadays! You’ll also need a couple of different tips for different kinds of work, and between them a fine-needle pointy one, and a larger chisel-shaped one will cover most bases.

There are plenty of ‘digital’ soldering stations around for your budget from the likes of Duratool and Tenma, amongst others. But at that budget level they are cheap and cheerful and won’t last for ever. A decent Weller, on the other hand, will cost three times as much and is great if you’re using it all day every day, but probably overkill for occasional hobby work. I’d suggest you try out the ranges at CPC (http://cpc.farnell.com/soldering-stations_soldering-stations).

If you plan to repair or modify any reasonably modern equipment, you’ll have to use lead-free solder, which requires higher iron temperatures than was necessary for the previous generations of leaded solder. So an adjustable temperature-controlled iron is useful. And don’t use the wet-sponge tip cleaner — they kill soldering iron tips quicker than anything else! Instead, use one of the cleaners that comprises low-abrasive metal shavings sitting in a container. They’re less messy too.

You can still buy leaded multicore solder, and you’ll probably find it easier to start using that for making your own cables and kits. You’ll also need something for de-soldering to repair joints that go wrong. I use a ‘solder sucker’ out of habit, but de-solder braid is kinder to the PCB.