Q. What's the best way to transfer software to my new PC?

I have just ordered a new PC, which I am turning into a music-only machine, using software from my old workhorse computer. Initially, I thought transferring the software would be a piece of cake: I'd just locate my old CDs and registration codes and get on with it. To my despair, I have now discovered that I've lost some registration codes, as well as one or two CDs. Is there an alternative way to transfer all of my music programs and settings from my current PC to a new one? I have read about an application called PC Mover, but apparently it does not let you choose which programmes to transfer. Could you provide some suggestions on how to go about this in a simple fashion?

PC music specialist Martin Walker replies: I've recently built myself a new and faster PC and gone through the process of reinstalling the operating system and all my applications, plug-ins and soft synths. While this was relatively straightforward, it can be very tedious; I certainly wouldn't describe it as a piece of cake! I covered installing Windows plus the related subjects of BIOS updates, Service Packs, INF files, Hotfixes, Automated Installation, Windows activation and licensing issues in PC Musician March 2007 (on-line at www.soundonsound.com/sos/ mar07/articles/pcmusician_0307.htm). 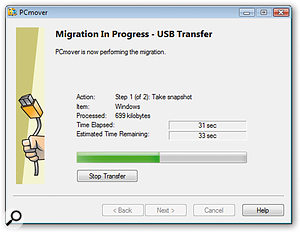 Laplink's PC Mover software enables the user to transfer all applications and related files of a hard drive from one computer to another over a number of protocols, but does not allow you to specify which files you send.

I followed this up with lots of advice about reinstalling your applications in the PC Notes column of SOS April 2007 (surf to www.soundonsound.com/sos/ apr07/articles/pcnotes_0407.htm). Part of this advice included keeping your original CD/DVD disks safe in a single zippable wallet after first copying and pasting serial numbers and challenge/response data into a global text file and printing it out. This means you can then discard all the original and often bulky packaging. Keeping track of all this, in my experience, reduces the risk of CDs getting mislaid. However, if you've not only lost some of your registration codes but also a couple of the original CDs, there are three options open to you:

The first is to create an image file of the Windows partition on your old PC using a utility like Symantec's Ghost or Acronis' True Image, copy this across to the hard drive of your new PC, and then use the Windows CD-ROM to perform a Repair Install, as I described in PC Musician December 2003 (www.soundonsound.com/sos/ dec03/articles/pcmusician.htm). However, this can be risky, since so many hardware devices will probably have changed between one machine and the next, and your new PC may end up less stable, unless you really know what you're doing.

The second is to buy a 'migration utility' like Laplink's PC Mover (www.laplink.com), which you mention. I haven't tried this myself, but PC Mover runs on Windows 95, 98, ME, 2000, Media Center, XP, and Vista, and claims to move all applications plus associated files and settings from your old PC to your new one across a network, USB cable, parallel cable, Windows Easy Transfer Cable, or any type of removable media that can be read by both PCs. However, it does this 'en masse': every application and its associated data and Registry entries are moved, to recreate your old PC in its entirety on the new PC, which may not suit you. What's more, PC Mover won't always move copy-protected software, particularly if it's tied to the hardware of your old PC (which is no doubt reassuring for the developers of that software).

Personally, despite the amount of work involved, I was pleased to start afresh on my new PC and reinstall everything from scratch. This is the only way to ensure a truly stable computer, and it gives you the chance to discard elderly applications that you no longer use. It also results in a Registry that's not bogged down with loads of references to redundant software and devices, giving it the best chance to perform at its best.

So my advice is to take the third option, and contact the developers of those few applications whose registrations you are missing. Some printed manuals include a sticky label inside the cover, displaying your serial number, so check these first. If you bought these applications via Internet download, the developers should have records of your serial number and registration details on their database, and should be happy to re-send them to you. Failing this, they may be able to tell you how to discover your registration codes from the Registry of your old PC, so they can confirm your details. Similarly, as long as you registered the product, many developers will replace lost application CDs for a nominal fee to cover media costs.