Q. Which portable vocal screen should I buy? Skip to main content

Q. Which portable vocal screen should I buy?

I have a modest bedroom studio with way too many room reflections. I really don't want to apply any treatment to the walls, for aesthetic reasons (it's my bedroom!). I sometimes want to record vocals and acoustic guitar and am trying to decide between the SE Reflexion Filter and the RealTraps Portable Vocal Booth. Can you please tell me your thoughts on which one you'd recommend? The RealTraps PVB is larger and so would probably do a better job of containing the vocal sound and creating its own little 'acoustically protected' space. And it works as a moveable gobo for amps and acoustic guitar, for example. However, I think the SE Reflexion Filter looks much more attractive, and I like the SE's smaller size because I probably wouldn't feel so boxed in if I'm singing for an hour or two. I have a heavy-duty mic stand, so weight and balance aren't a problem. The RealTraps web site compares the two items and their test shows the SE Reflexion Filter with terrible comb filtering, but I've read that it's important to properly place the mic with the Reflexion Filter to avoid this. However, I know Paul White recommends it for all those Studio SOS projects, so it can't be that bad!

SOS Technical Editor Hugh Robjohns replies: The bottom line is that neither of those devices will do what you need on their own. As we say and demonstrate so often in the Studio SOS articles, they are a useful addition but are not adequate on their own to 'cure' poor room acoustics.

The fundamental problem is that the microphone picks up sound mostly from its front and, to a slightly less sensitive degree, from the sides — assuming that we are talking about a cardioid polar-pattern microphone. Any sound that bounces off the wall behind the performer (and, to a slightly lesser degree, the side walls) will reach the microphone at its most sensitive frontal axis and slightly less sensitive sides, and those are the reflections that are the most important to remove, because they are the ones that make the recording sound coloured and boxy. The only way to remove those reflections is with good broadband absorption behind the performer and, ideally extending around the sides.

The cheapest and easiest way of achieving effective rear and side absorption is to use thick polyester duvets suspended in some convenient way: from cheap T-bar lighting stands or similar, for example. This arrangement is very cost effective, very compact when put away, entirely non-destructive to the room furnishings, and orders of magnitude more effective in improving the recording room acoustics than any kind of reflection filter or portable booth. We have proven this simple technique countless times in our Studio SOS visits.

Once you have dealt with the very audible 'over-the-shoulder' reflections, you can then think about dealing with those bouncing back from the other end of the room and reaching the mic around its less sensitive rear half — and that's where products like reflection filters and portable booths really come in.

The Reflexion Filter performs remarkably well for its size, which is the whole point of its clever design. It's easy to achieve great acoustic attenuation using something the size of a door; getting decent results from something so compact requires ingenuity! The Reflexion Filter typically provides around 10dB of attenuation above 2kHz, while the much thicker and larger RealTraps panel only adds another 3dB to that! That's well worth having, obviously, but it isn't rocket science to realise that larger, thicker and heavier acoustic panels are going to be more effective than smaller, thinner ones.

There's no doubt that RealTraps' panels are effective, and if you have the space they would be a very good choice. The SE Reflexion Filter achieves a broadly similar and still very useful acoustic performance in a much more compact size, through the use of clever layering technology. As they say where I come from, "You pays yer money and makes yer choice...”. Both solutions have a variety of pros and cons, and only you can decide which offers the best overall compromise for your specific situation. 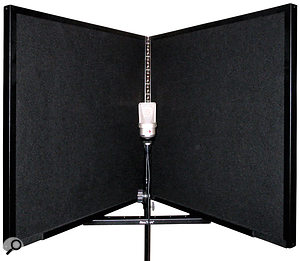 Both the SE Reflexion filter and the RealTraps Portable Vocal Booth perform very well for the applications they are designed for. However, they can never replace proper room treatment. The old trick of hanging a duvet behind the singer is a good compromise in a situation where you don't want to permanently treat your space. 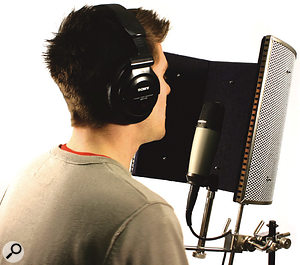 Comb filtering can be an issue with any surface placed close to the mic, because not all sound energy is absorbed and some, inevitably, will be reflected back towards the mic, resulting in some comb filtering. In the case of the Reflexion Filter, this effect is very dependent on the placement of the microphone, but it is easily avoided, and correct alignment is discussed in the user manual. Essentially, the mic capsule has to be placed slightly forward of the front edges of the Filter. It's really not a problem in practice, as you can move the mic while wearing headphones to make sure the placement is optimised.