I recently read Mike Senior's review of the Alesis Multimix 16, and he listed as one of the cons the lack of a high‑impedance instrument input. I agree with him, but have been searching for ages for a small mixer with this kind of input and can't find one anywhere. Is there one? The mixer isn't actually for me, but for a musician friend who still records to eight‑track cassette via an old PA and various pedals and outboard. He plays bass pedals and has an ancient drum machines, plus he sings and plays guitar and banjo. The outboard and the PA mixer are noisy, and as I transfer his tapes and mix them I spend far too much time on noise reduction and not enough on mixing and production. He is not technically savvy, and getting him to use several of the eight‑track inputs is not a option, so I am looking for a mixer he can plug his instruments into and get a clean relatively noise‑free signal from, to feed the eight‑track. 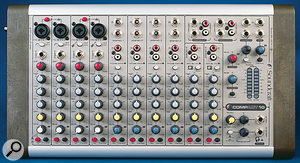 Not as many small mixers as you would imagine come with high-impedance instrument inputs. Soundcraft's Compact 10 is one of them.

SOS contributor Mike Senior replies: High‑impedance inputs aren't tremendously common on traditional small‑format mixers, and it was only really because the Alesis Multimix 16 also offered USB audio interfacing for recording purposes that I felt that this omission was a significant missed opportunity. Unlike mixers, a lot of audio interfaces do have instrument inputs built in, and these products inevitably compete to a certain extent with the Multimix for the punter's pound. However, if you root around a bit you can still find a few products that might fit the bill.

For example, Mackie's latest 402 and 802 VLZ3 mini‑mixers both have two line inputs that are switchable for high‑impedance operation, and also have the company's renowned XDR2 mic preamps, so those would probably be well worth looking at. I can see their relative operational simplicity being a big part of the appeal here too. The same company's newly announced U420 four‑channel mixer/interface also has a high‑impedance input, but I don't think you really need that unit's Firewire interfacing, so it wouldn't represent good value for you in this case.

Another option might be the Soundcraft Compact 4 or Compact 10, with one and two high‑impedance inputs respectively, and these should also be pretty easy to drive. Edirol's M16DX and M10DX digital mixers also have high‑impedance inputs, but I'd probably steer clear of those in this situation, simply because the potential benefits of their built‑in digital processing will almost certainly be lost on someone dealing primarily with analogue gear and not particularly technically minded. Other than those models, there doesn't appear to be much else out there with an instrument input built in, but I think we're going to see that changing, to be honest, as the line between 'mixer' and 'audio interface' becomes ever more blurred.