Q. Why is 88.2kHz the best sample rate for recording? Skip to main content

Q. Why is 88.2kHz the best sample rate for recording?

I have read that the optimum sample rate to record at is 88.2kHz. The reasons include simple integer-ratio sample-rate conversion, avoiding the phase shifts and ringing of anti-alias filtering at 20kHz, and less data to move about compared to 176.4kHz. Is there any truth in these assertions? 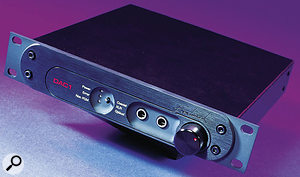 The Benchmark DAC1 is one of many converters that achieves excellent audio quality without using synchronous (integer-ratio) sample-rate conversion.

SOS Technical Editor Hugh Robjohns replies: These claims are partially true! Let's start with the simple integer-ratio sample-rate conversion issue. Simple ratios were important in the days of 'synchronous' sample-rate conversion, but that technology went the way of the dodo a long time ago. It was a relatively simplistic approach that did work best with simple ratios between the source and destination sample rates. However, it had limited resolution in terms of the practical word-lengths achievable, with the noise floor rarely being better than the equivalent of 18 or 19 bits. Moreover, the approach is hugely wasteful of computational effort, calculating millions of intermediate sample values no one has any interest in.

Modern 'asynchronous' sample-rate conversion is far more sophisticated and works by analysing the source and destination sample rates and working out only the required sample values with huge precision. This achieves a technical performance that is significantly in excess of any real-world converter and very close to the 24-bit theoretical level — and that's achieved with any ratio of input-to-output sample rate. There is no measurable difference in performance between using simple integer ratios or complex ones.

In fact, it's interesting to note that some of the best performing D-A and A-D converters from the likes of Benchmark, Crookwood, Cranesong, Drawmer, and others, all use non-integer sample-rate conversion as an inherent part of their jitter-isolation process. For example, D-A converters using this approach typically up-sample the incoming digital audio to something like 210kHz, or the rate at which the physical D-A converter chip achieves its best performance figures: no simple-ratio conversions going on there, yet class-leading performance specifications!

Moving on to the second point, there is a (weak) argument for sampling original material at a rate higher than 44.1kHz in some cases. The reason is that a lot of A-D systems are designed with relatively imprecise anti-alias filtering, which typically only manages 6dB attenuation at half the sampling rate, instead of the 100dB or more that is theoretically required. It's done in that way because it makes the A-D converter's digital filtering a lot easier to design, and in most cases it makes little difference. However, aliasing could result if the input audio contains a lot of strong extreme HF harmonics. Cymbals, orchestral strings and brass can all generate enough HF energy, if close-miked, to cause this problem with some converters. In such cases, switching to a higher sample rate might sound noticeably sweeter.

The issue then, of course, is how to down-convert to 44.1kHz for release without suffering the same problem in the sample-rate converter (SRC) anti-alias filtering. Clearly, a properly designed digital filter is required in the SRC, and while some software SRCs do this properly, some don't. The Infinite Wave SRC comparison web site reveals the scary truth! (See http://src.infinitewave.ca).

The 176kHz (or 192kHz) quad-sample-rate idea is really just about being able to say 'mine's bigger than yours'. There's a very good white paper about sampling theory on Lavry's web site (www.lavryengineering.com) where Dan Lavry points out that the higher the sample rate, the greater the proportion of error in sampling time and the lower the actual audio resolution. Lavry argues (very sensibly, in my opinion) that the optimal sample rate would actually be 60kHz. In the real world, 96kHz can be useful, for the reasons mentioned above, but the quad rates are a folly and Lavry refuses to support them!