Q. Why do my Cuica recordings sound worse than those of other instruments? 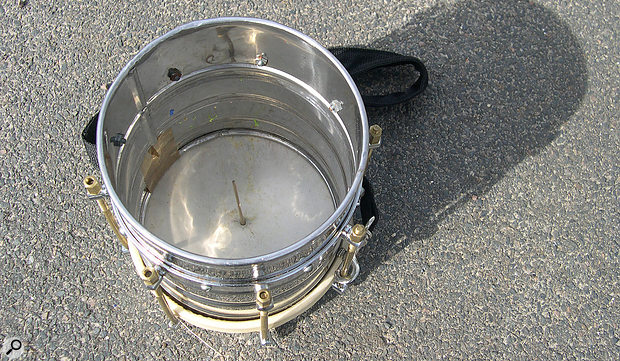 The Brazilian Cuica: notice the stick inside the drum, which is attached to the skin.Photo: Creative Commons by Wikimedia user Alno

I want to add a Cuica drum part to a Latin jazz fusion piece and have a nice Cuica drum similar in size to the one in this YouTube video: https://www.youtube.com/watch?v=QCCPiFegZmg. My first attempt at recording it was in my project studio (a 22 x 16-foot treated room) where things like shakers, drum set, and tambourine all sound good — it’s usually just dead and you don’t hear the room. But the Cuica drum sounds ‘roomy’, ‘phasey’, and wrong. The sound reminds me of a small untreated room, and it robs the drum of its fullness and natural sound, making it sort of wimpy and cheap.

I just used one large-diaphragm condenser mic pointed at the top of the drum head from about 18 inches away. Perhaps that was the problem? After all, this thing does have sound coming out both ends. I love the sound of the drum in the video, and have noticed that it’s being played in what appears to be a really live room with tiled walls. I have a room like that too, which is about 24 x 20 feet and mostly empty, with a cork floor, high angled ceilings, and some stone walls. Things like acoustic guitars and violin sound great in there. Would that be a better choice? Another great Cuica drum sound I like is on Arturo O’Farrill’s ‘Cuarto De Colores’.

SOS Contributor Mike Senior replies: I think the root of the problem is that you’re catching too little of the complete sound of the instrument. For a start, it’s important to realise that the sound of the Cuica doesn’t just emanate from the drum head — it’s also coming from the shell of the drum, and this shell component will tend to radiate sideways, not towards your mic position. Plus, direct sounds arriving at the mic position from different points on the drum shell may well arrive at the capsule out of polarity with each other, so the oddly roomy and phasey sound you’re getting doesn’t surprise me at all. (That said, do just double-check that you’ve not inadvertently set up your side-fire cardioid mic with its rear null pointing towards the instrument by mistake. No one’s immune to that particular pratfall, no matter how long they’ve been doing this gig...)

But it’s not simply the focus of the mic that’s a concern here, because I think it’s probably just too close as well. Because Cuicas have plenty of projection, people are quite used to hearing them from a reasonable distance, and under such circumstances not only do the different frequency components put out by the drum head and shell have a good opportunity to blend in the air on their way directly to the listener, but they’re also admixed with plenty of reflected sound from the acoustic environment.

Or, to put it another way, consider how that sound you say you like in the video is likely coming about. There’s no mic in shot, and when the visual perspective gets more distant, the sound gets more ambient, so it’s odds on we’re hearing the mic mounted on the camera itself. Not only is that going to be reasonably off-axis to the instrument most of the time (in contrast to your on-axis positioning), but it’s also at roughly double the distance of your mic. Add in the clearly reflective space, and it’s not too mysterious that the video sounds very different from the first-bash miking scheme you’ve described. So, as a starting point, my advice would be to move the player into the more reflective room you use for acoustic guitar and violin, and then place the mic maybe three feet away and slightly off-axis to the head. I’d also suggest taking one other cue from that video: record the instrument in stereo. Particularly with naturally ambient instruments, a slight decorellation of the stereo image does help make them seem more realistic in my experience.

If you find you get too much reverb on the sound at that kind of miking distance, then first try just putting some absorptive material behind the mic — the aim being to dampen mostly the later multi-bounce reflections that contribute to the reverb tail, rather than the shorter single-bounce early reflections that will tend to enhance the instrument’s timbre. If that doesn’t work, then try supplementing the far mics with a close mic or two. After all, this is roughly speaking what I’m assuming you did when recording the drum kit (ie. supplementing more distance overheads and room mics with closer spot mics), and you’ve been happy with the results you achieved with that in the past.