Q. Why do I need to use a DI box? Skip to main content

I've been reading a fair bit about the best way to directly connect instruments to a PA recently, and I must admit I'm still a bit confused. My first question — hopefully the simple one — is why is it recommended that an instrument (say, a keyboard) is connected to a DI box, which changes the signal to low‑impedance/mic‑level, and then send it to the mixer, where it goes through a preamp to end up as a line‑level signal again? It seems that it would be simpler to send the line‑level signal and plug it into an insert on a channel, rather than a mic input.My second question is a bit more vague and has to do with connecting other instruments, such as a harp with a transducer and an electric violin. These obviously aren't microphone or line‑level signals and I'm not sure how to treat them. I have been advised to use an LR Baggs Para DI for the harp, which appears to be a preamp that then cuts the signal back down to mic level.

SOS Technical Editor Hugh Robjohns replies: Both arrangements will work but, unless the cables' lengths are very short, the DI route will usually provide better quality, despite the apparent illogicality!

Firstly, the fact is that all cables are capacitive, and that capacitance reacts with the source and destination impedances to form a low‑pass filter. The higher the impedances and the longer the cable, the worse that gets, curtailing the high end. So working with a low source impedance and relatively low microphone input impedance means you can pass signal over extremely long cables without problems. 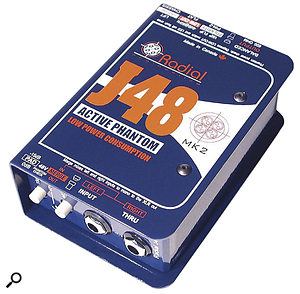 There are many reasons to use a DI box. For example, the capacitance of cables reacts with source and destination impedances, forming a low‑pass filter. When dealing with high impedances and long cables, this only gets worse, curtailing the high end of the signal. The relatively low impedance created when the signal passes through a DI box enables you to work with long cables without problems.

Secondly, sending a balanced signal to a differential input means that RF and EM interference breaking into the cable can be largely rejected, which is very handy in a hostile and unpredictable environment in which there will be lighting interference and who knows what else. Mic signals are generally balanced, whereas instrument line signals are not.

Thirdly, most PA systems are set up with a mic‑level snake from stage to mixer, and it's just a lot more convenient, and faster, to rig to work entirely with mic‑level signals rather than a mix of mic and line.

As for your second question, regarding connecting more unusual instruments, these are generally fitted with piezo pickups or contact mics, similar to many acoustic guitars with fitted pickups. The output from the control or interface box will usually be 'instrument level', much the same as a guitar and will require a DI box again. 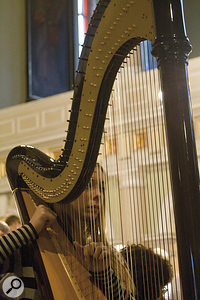 Some unusual instruments, such as harps, can be fitted with piezo pickups or contact mics, whose outputs are usually at 'instrument' level, and will therefore require a DI box.Photo: Flickr / Alan Cleaver

A decent active DI will set you back about £100 in the UK, but many people baulk at that when they see generic 'active DI' boxes going for £20 or so. However, the difference in sound quality is often very significant, and in my experience the better boxes are built to last. If you amortise the cost of a decent box over 10 years or more, it only costs £10 a year, and that's peanuts compared to your mics and other gear.

As for recommendations, I'm a fan of the Radial J48 and the BSS AR113, but the Canford Audio Active DI box (originally designed and marketed by Technical Projects) is also excellent and remarkably versatile. The Klark Teknik DN100 is another strong contender.