Q. Would an Aural Exciter improve my sound? Skip to main content

Q. Would an Aural Exciter improve my sound?

I've got a fairly basic home setup based around a Yamaha AW16G multitracker, but I've seen an Aphex Aural Exciter and wondered if they achieve anything. Is it worth getting one, and if so, how would I use it to its best advantage? Is it something that would be connected on the way in while recording, or do I send what's been recorded in and out via the Yamaha's auxiliaries? 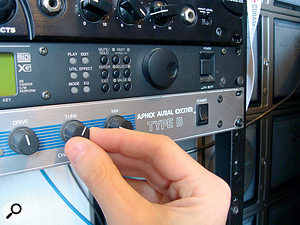 When using an Aphex Aural Exciter for processing vocal parts, you have to be careful in setting the unit's Tune control, to avoid unduly emphasising sibilance.

SOS contributor Mike Senior replies: I've used Aphex Aural Exciters in various forms myself, so maybe I can give some perspective here, especially as I've used one a lot alongside a similar all‑in‑one hardware system based around Roland's VS2480. As I see it, the main purpose of Aphex's particular brand of high‑frequency enhancement is simple: to bring lead vocals right to the front of a mix. The problem with achieving up‑front vocals with most digital multitrackers is that the kind of CPU‑efficient effects processing you have access to onboard really isn't tremendously useful in this regard. Whatever built‑in digital high‑frequency processing you use (whether equalisation or some other type of enhancement) will usually just start sounding unpleasantly abrasive well before it's actually making your vocals clear enough in the mix. If you don't need up‑front vocals, of course, I reckon an Aural Exciter may not be a really essential purchase for you. (Incidentally, some of the more recent Aphex Aural Exciters have a 'big bottom' circuit in them, but I've never been much enamoured of that, so I wouldn't personally buy one just for that either.)

In terms of when to use an Exciter, it's best considered as a mix effect, rather than something to record through. The control settings are quite critical and can only be properly judged in the context of the final mix, so there's no point in restricting your options by processing while recording, especially since it's tricky to reverse the effects if you've been over‑zealous. Connecting the box up with your AW16G would probably work best if you're feeding the unit from your lead vocal playback channel via a pre‑fade auxiliary send, because this then allows you to mute the lead vocal channel without muting the send, meaning that the Exciter can then basically act as an insert processor, rather than as a send effect. (If you tried to use it as a send effect, you'd get phasing between the processed and unprocessed signals because of D‑A and A‑D conversion delays between the AW16G and the Aphex hardware, so stick with an insert‑style configuration.) Try to get as high a level as you can through the Exciter without clipping it, simply to avoid introducing any more additional noise than necessary while processing, especially as the connections will already be more prone to noise pick‑up given that the AW16G only has unbalanced jack aux outputs.

When it comes to setting up the Exciter's controls, you need to be a bit careful. If you're going to do any compression on the vocal, I'd suggest you carry that out on the source vocal channel rather than the Exciter return, because this will present a more consistent signal to the Exciter, making the Exciter easier to control. The three parameters available on the unit's front panel are Drive, Tune, and Mix. The Exciter works by adding high‑frequency distortion artifacts to the signal above a frequency specified by the Tune control. Drive adjusts how dense the distortion harmonics are, and Mix determines at what level the distortion is mixed back in with the main signal. I tend to keep the Drive control about mid‑way through its travel, put the Tune control as high as I can while still having the desired effect, and then set the Mix control as low as I can get away with.

The reason I try to set the Tune control high is that lower settings can easily catch the sibilant ('S') or fricative ('F') sounds in a vocal and make them painfully obtrusive in a way that even a serious de‑esser will struggle vainly to remedy. The reason to keep the Mix control as low as you can is that the Aphex enhancement process can be quite fatiguing on the ear, and overdoing it can create an unpleasant listening experience, especially if you're listening loud. In fact, the fatiguing nature of the sound also makes it very easy for you to keep turning up the Mix control as your ears get less sensitive to it during extended mixing sessions. This can leave you unaware that you're over‑processing until you come back to your mix after a break and discover that your vocal has transformed into some kind of high‑speed power tool! I avoid this pitfall most of the time by never increasing the Drive or Mix settings before I've hit the Exciter's bypass button and reaccustomed myself to the unprocessed sound for 30 seconds or so. Nine times out of 10, when I switch in the processing again I end up leaving the controls exactly the way they were!

The A-Z Of Audio Interfaces
4 weeks 13 hours ago.