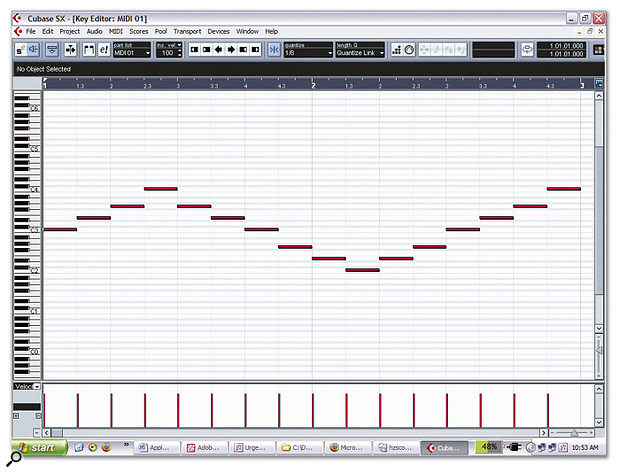 The Key Editor has many useful key commands for changing and manipulating the current selection of MIDI note events, without your hands ever having to leave the keyboard.

The Key Editor is a seemingly straightforward MIDI editor, yet under its surface lie a number of features that can really speed up your editing tasks. We explain, as well as reporting on the new version 2.2 Cubase update.

It has to be said that, compared to Cubase VST, the Key Editor found in Cubase SX/SL version 1 was a little under-nourished for the liking of serious Cubase MIDI fiends. So it's perhaps no surprise that it received a great deal of attention in version 2 from Steinberg's developers, and although some users still feel it lacks a few of the finer points from the previous generation of Cubase, there's no doubt that the Key Editor remains one of the program's strongest assets.

Learning key commands is always a great way to speed up workflow in any app, and it's possible to achieve some quite detailed editing in the Cubase Key Editor using nothing more than cursor keys and a handful of modifiers. Using the left and right cursor keys, for example, enables you to step forwards and backwards through the note events in the editor. When you have more than one note event on the same beat, the order in which these are selected depends on the order in which they were entered into Cubase. This order is the same as displayed in the List Editor and, other than opening this window at the same time, there's no real way to know in what order events will be selected, unless you're dealing with a monophonic line.

The temptation when navigating through the Key Editor with the cursor keys is to use the up and down keys to select the different notes in a chord. However, as you'll soon realise, these keys are reserved for transposing the selected note (or notes) higher or lower, in semitone steps. To move the current selection up or down by an octave, press Shift at the same time as either of the cursor keys. This begs the question: what happens if you hold down shift while pressing the left and right cursor keys? Well, this works for selecting notes, in much the same way as described earlier, except that the previously selected note (or notes) stay selected as you extend the selection of notes further forwards or backwards in the event list. For example, with a note selected, holding down Shift and pressing the right cursor key three times will select the next three notes in addition to the one that was already selected.

On the subject of selecting notes, here's an interesting (and brief, don't worry!) digression. When you want to select notes of the same pitch, there's a neater way than by using the commands in the Edit / Select menu. The problem with this command is that it always selects onwards from the currently selected note, meaning that if you have notes of the same pitch earlier in the song, these won't become selected. While this can be useful in some cases (and can also be achieved by Shift-double-clicking a note), you can select every note of a given pitch in the Key Editor at any point by Control/Apple clicking the pitch on the keyboard that runs up the left of the window.

Once you've selected some notes in the Key Editor, you can also carry out quite a number of edits without your fingers ever having to leave the keyboard. We've already looked at transposing — that is to say, adjusting pitch — but you can also adjust the position of notes, in addition to the start or end points. Holding down Control/Apple allows you to nudge the selection forwards or backwards in time, based on the current quantise setting. With a quantise setting of 1/8, for example, notes will be nudged forwards or backwards in eighth-note steps (or quavers, for European musicians!). And remember, assigning quantise values to key commands via the 'MIDI Quantise' group isn't a bad idea either: I usually use Alt+1 to Alt+7 for whole notes through 64th notes respectively. This operation works the same irrespective of whether or not Snap mode is enabled.

If you want to adjust the length of a note (or the currently selected notes), press Alt and Shift together while pressing either the right or left cursor keys to increase or decrease the note length (or lengths) — this time in steps according to the current Length Quantise setting. I usually leave Length Quantise set to Quantise Link, to make things easier, especially where key commands are concerned, although you can assign the Length Quantise values to their own key commands via the 'Set Insert Length' group. To adjust only the start point of a note, leaving the end point where it is, just press Alt (without the Shift key) while using the left and right cursor keys instead. This command uses just the regular quantise setting.

Two things are worth noting about the key commands we've discussed for nudging and adjusting the length and start points of notes. Firstly, these commands are also available via the Nudge toolbar commands, which are usually hidden by default. Simply right-click on the toolbar, and make sure Nudge is checked, to reveal them. Secondly, key commands also work for manipulating events in the Project window. The left and right cursor keys select the next or previous event on a track, while the up and down keys select the next or previous track in the track list. Holding down Shift for either direction selects multiple objects or tracks, and although the selection of objects on a track works the same as the selection of notes within the Key Editor, handling of multiple track selection is a little different. Press Shift and the up cursor key to select the tracks above the selected track, one by one, and press Shift and down to select the tracks below it. The difference here is that selecting additional tracks works independently in the two directions, basically meaning that there's no way to decrease the number of selected tracks without starting again (by pressing the up and down cursor keys without Shift). 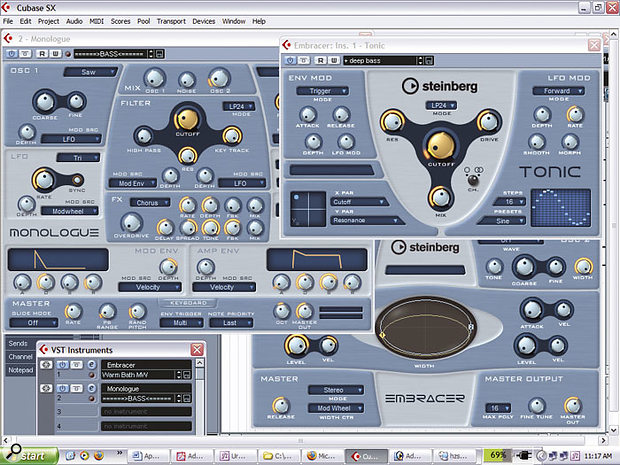 Steinberg recently released Cubase SX v2.2, an update that adds many long-awaited features to the application, such as support for Mackie Control XT. Mackie Control XT units are added to the Device Setup window just like regular Mackie Control devices, but when Cubase detects that multiple Mackie Control devices have been set up it spreads the channel selection across the available devices, assuming that the XT units are placed, in order, to the left of the main Mackie Control unit. This behaviour also extends to modes where one channel's (or a plug-in's) controls are spread across the available encoders. Staying with control surfaces, the Generic Remote has also been enhanced with the ability to import remote description files defined in v1.x versions of Cubase.

While users with control surfaces will no doubt appreciate the improvements to that aspect of Cubase, one of Steinberg's highlights for the 2.2 release is the addition of three new plug-ins developed in collaboration with Wizoo. Monologue is a two-oscillator virtual analogue synth based on physical modelling techniques. Being a monophonic instrument, it's ideal for bass, lead and sequenced sounds, as demonstrated by the selection of presets. Embracer is a pad synthesizer that can work either in stereo or surround, thanks to an additional second stereo output added to the Mixer to deal with the rear channels. The width and spatial positioning of the two pad wavetable oscillators (offering a choice of 12 waves) can be controlled via an intuitive interface. Finally, Tonic is a filter that models the characteristics of analogue filters with variable envelope triggering modes, and has a step sequencer for drawing your own LFO shape.

A new option that may be the most significant part of 2.2 for Windows users is the 'Use System Timestamp' flag at the bottom of the DirectMusic panel in the Device Setup window. Enabling this option forces the time stamp given to each MIDI event as it passes through Window's DirectMusic sub-system (the part of the DirectX multimedia Windows API that handles MIDI) to be used rather than the time stamp generated by Cubase when it records the event. This solves what has become an increasingly common problem whereby (with certain MIDI device drivers) MIDI events are shifted backwards in time during real-time MIDI recording.

One of the great things about key commands in Cubase is the ability to combine a sequence of them into a Macro, which we've looked at in previous Cubase Notes columns. Using this technique with the commands we've just been looking at, you can create some really useful tools to achieve Logical Editor-style operations without using the Logical Editor. This is useful since you still can't assign key commands to Logical Editor presets in Cubase, although this is hopefully not too far away.

As an example Macro, how about creating something that copies the currently selected notes and moves the copy an octave above or below the original? In the Key Commands window, click the Show Macros button, followed by 'New Macro', to start creating a new Macro. By selecting the appropriate key command in the upper part of the window and clicking 'Add Command', add the following commands to the Macro: 'Edit > Copy', 'Transport > Locate Selection', > 'Edit > Paste', and 'Navigate > Add Up'. The Transport command is necessary because Cubase always pastes the contents of the clipboard at the current position of the Project cursor. It's necessary to set the Project cursor to the start of the selection in this Macro, so that the notes are pasted back into the Editor at the correct time.

For adjusting the length and position of notes, a nice idea (especially if you use a separate keypad device for triggering key commands) would be to build Macros to automatically select a different quantise setting before the required Nudge command. In this way you could have different keys to adjust note length by eighth notes, quarter notes, and so on.