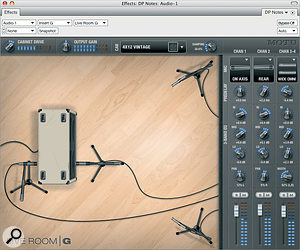 Live Room G is a fabulous tool for crafting a huge range of guitar sounds. It tames Custom '59's distortion, and also works wonders all by itself, or with a single distortion or overdrive pedal.

What's immediately apparent when you use DP7's new guitar plug‑ins is how different they feel compared to third‑party packages such as NI's Guitar Rig and Waves' GTR. The 'all‑in‑one' designs of the latter two allow you to call up chains of effects and choose an amplifier model and speaker cabinet within the confines of a single plug‑in window. DP7 uses a different approach, with all of its guitar processors appearing as individual plug‑ins. There are advantages to doing it in this way: you can use the Live Room G speaker‑cabinet emulator on a Hammond organ track, for example, without being saddled with a bunch of other guitar features you don't need. But there are clear disadvantages, too. One is the challenge of co‑ordinating the many individual plug‑ins you might need to achieve your desired tone, and another is the lack of a formal 'preset' system for groups of plug‑ins. However, there are ways to deal with both.

Let's deal with that first point, to begin with. In DP, you assemble processing 'chains' by placing your plug‑ins in order, from top to bottom of the plug‑in slots in a Mixing Board channel. So for a typical chorused sound, you might choose a chain comprising something like the Analog Chorus 'pedal', the Custom '59 guitar amp emulator, then Live Room G. That would appear in your plug‑in slots as in the screen on the left.

That seems easy enough, but what if you ever needed more than five plug‑ins, for a more complex chain of effects? That's also easy: go to the Mixing Board's mini‑menu and choose 'Set Number of Effects Inserts'. In the dialogue box that appears, you can specify up to 20 slots, which should deal with even the most outrageous guitar treatments!

With bigger plug‑in chains comes the challenge of using them efficiently, and here a tiny bit of Mixing Board technique is worth an awful lot. By moving your mouse pointer to the left edge of an occupied plug‑in slot, you get a 'move hand'. Click and drag a plug‑in like this, and you can move it to another slot, which makes re‑ordering a plug‑in within a chain really easy. You can also re‑order whole groups of plug‑ins. First, click a plug‑in within an insert slot (this time not at the left edge) to select it, and then shift‑click additional plug‑ins to add them to the selection. When you're ready, point to the left edge of any one of them, and all the plug‑ins you selected can be dragged en masse to a new location. You never need to worry about channel formats when you're doing this either, as DP does all the behind‑the‑scenes work in switching the plug‑in you're moving, or those in neighbouring slots, to maintain the appropriate mono or stereo signal flow. Sweet!

Pointing to the left edge of a plug‑in slot gives you a 'move hand' that lets you reposition one or more plug‑ins into lower or higher slots. Here the selected Analog Chorus and MW Equalizer plug‑ins are being placed first in the processing chain.

Here are some other ideas. When you're dragging a plug‑in (or plug‑ins), holding down the Alt key will duplicate rather than move them — which is really handy for copying whole chains from one track to another. Holding down Alt while you click a plug‑in within its insert slot toggles it on and off, just the same as clicking its bypass button if its window were open. Bypassed plug‑ins are shown with their names in italics. And if you're getting overwhelmed with plug‑in windows while tweaking a long chain of effects, try closing all but one, and then using that one's 'insert view' pop‑up menu to switch to another plug‑in in the same window.

Use a plug‑in window's 'insert view' pop‑up menu to view all your plug‑ins without drowning in windows.

You've perfected a plug‑in processing chain for your guitar sound. How do you go about using it in another DP project? The answer is with Clippings.

2. Name the window that appears. For the sake of illustration, I'll call it 'My Guitar FX'.

3. In the Mixing Board, click (and shift‑click) all plug‑ins in your chain, to select them.

4. In the Edit menu, choose Copy to Clippings Window / Copy to My Guitar FX.

5. If the little Clippings Windows you created in step two is no longer visible, select it by name from the bottom section of the Window menu. Then Alt‑click the Clipping name to rename it as something more useful. I've chosen 'Crunchy Drive 1'.

Having saved your plug‑in chain, with all its settings, you can close your project and open the one in which you want to use this same processing chain. In the Project menu, choose Clippings / My Guitar FX, and then, from the window that appears (look familiar?), drag 'Crunchy Drive 1' onto your guitar track's insert slots in the Mixing Board.

Using this same technique, you can build up whole libraries of plug‑in settings and chains for yourself. Or try some that MOTU have made for you: go to www.motu.com/newsitems/new‑guitar‑tones‑for‑dp7 and download some of the Clippings there. You can then drag the Clippings files directly from the OS X Finder into plug‑in slots in DP.

On the face of it, DP7's guitar plug‑ins seem straightforward: you get a bunch of different distortions, a chorus, a noise gate and wah, an amp simulator, and a room simulator. However, there's more subtlety and flexibility here than you might initially realise.

First of all, it's important to understand that Custom '59 is just an amp head, not a speaker cabinet as well. If you use it by itself... well, just don't! Not unless you like really hissy, sharp‑edged distortion, that is. It's really designed to be used in the signal flow ahead of Live Room G, which adds the speaker emulation that smooths everything out and thickens it up.

The next thing about Custom '59 is that it just doesn't overdrive and distort in the aggressive way that some more modern amps do. Maybe the clue is in the name, because MOTU apparently aimed it at the production of predominantly clean and light blues tones, with the possibility of a bit of crunch emerging in response to a more active playing style. So the bottom line is that you need to work with what it was designed to do, and don't expect it to replicate every amp on the planet. Having said that, you can massively expand its range by preceding it with one of the new distortion plug‑ins, or just a humble Trim plug‑in, set to drive the input with, say, an additional 30dB of gain.

Also, take a closer look at Live Room G (see screen opposite). It actually has its own drive stage, controlled by the 'Cabinet Drive' knob at top left. You can use this to increase Custom 59's scope when it's feeding into Live Room G. However, some of the best heavier tones available in DP7, I think, are those achieved by missing out Custom '59 altogether, and just running a distortion plug‑in into Live Room G.

Finally for this month, let's talk about reverb. Plenty of hardware guitar amps have it built in, but DP's don't, so what should you use and where? My suggestion is to look at the excellent Plate plug‑in (and don't forget to click its 'expand' toggle to get the full range of options). You can also check out the many varied Plate presets in ProVerb, or even import a spring reverb impulse response from the web: try www.xs4all.nl/~fokkie/IR.htm for some classics. Place the reverb plug‑in before Live Room G, for an authentic amp‑based sound, or at the end of your processing chain for more expansive treatments.

Clipping windows in DP are great for storing 'presets' of plug‑in chains. They're views of actual folders on your Mac. 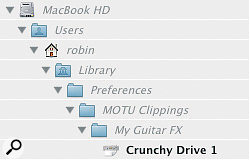 Clippings in DP are no more than little views of folders in specific places on your Mac. You can find out where by Command‑clicking a Clipping's 'title bar', and even open the corresponding folder in the Finder by choosing a 'parent' folder from the pop‑up menu that appears. Viewing your Clippings in this way opens up the possibility of emailing your favourites to collaborators, for example.

And the difference between a project Clipping Window and a Digital Performer Clipping Window? The former is stored in project folders, and available only to that project. The latter is available to all projects, existing or newly created. Choose whichever type best suits your needs.