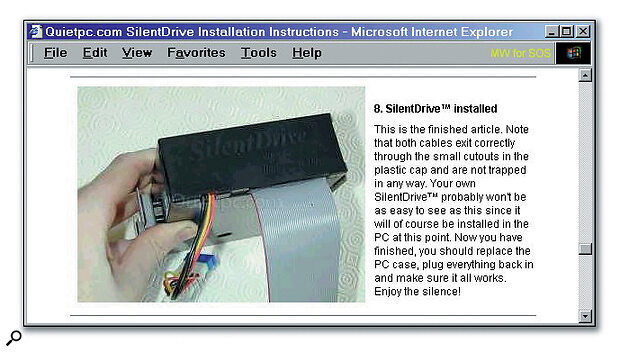 Fitting a SilentDrive sleeve should banish your hard drive noise for ever and is simplicity itself, thanks to Quiet PC's step‑by‑step installation instructions.

Martin Walker buys a new quiet hard drive for audio and looks into ways to eradicate any remaining noise, for a silent PC.

My main audio drive finally ran out of space this month, so it was time to invest in a larger model. You might laugh when I admit to the 4.5Gb capacity of my existing drive, but this has been quite large enough for my audio projects over the last two years, and it's only due to the recent influx of GigaStudio samples that my situation has changed. The current 10,000rpm Fujitsu SCSI drive has provided excellent performance and reliability since I bought it in August 1998, but a lot has altered since then. Drives of 80Gb or more can now be bought for under £300, and the performance of EIDE drives has become so good that many PC suppliers no longer even display SCSI ones in their catalogues.

I'd already experienced this improved performance for myself when reviewing the Millennium Music Software PC in SOS September 2000. Using the DskBench utility, I established that its 7200rpm Seagate Barracuda drive had a sustained transfer rate of 28Mb/second, compared with the 15Mb/second of my 10,000rpm SCSI drive. It was also considerably quieter, partly due to the slower spindle speed, but also because acoustic noise levels have dropped significantly across the board in the last couple of years. Although drive manufacturers are still developing bigger and faster drives, the 20Gb models in the average PC are already fast enough and big enough to last most users the lifetime of the PC. Given that many mainstream PC users are now looking for quieter models, drive manufacturers are paying more attention to this design consideration.

Another factor that can affect acoustic noise is the operational temperature of the drive. My 10,000rpm SCSI model runs almost too hot to touch, and although this kind of temperature is quite safe in the case of most drives, the constantly generated heat must be removed from the PC case using fans. If manufacturers choose drives that run quite cool, they can also use slower and quieter case fans. Sadly, the very fastest drives still tend to be the noisiest and hottest, so musicians must make a trade‑off between performance and acoustic noise.

Given the recent improvements in EIDE performance, I decided to look for a 30Gb 7200rpm EIDE drive that was fairly fast, yet reasonably quiet and cool at the same time. I ended up buying a 30Gb Seagate Barracuda ST330630A model for £129 — less than half what I paid for the SCSI drive two years ago. That's progress for you!

The other main contender was IBM's Deskstar 75GXP. This is a slightly faster performer, but its UDMA100 interface really needs at least an UDMA66‑equipped motherboard for best results, and mine's still UDMA33. I knew that Seagate had a utility to run the Barracuda model in UDMA33 mode with identical performance, and this seemed a safer option in my case. If your objective is the quietest drive, Fujitsu's MPF‑Aseries use fluid bearing motors and are generally regarded as the quietest around at the moment, but are slightly slower and, for some reason, rather harder to source from suppliers. 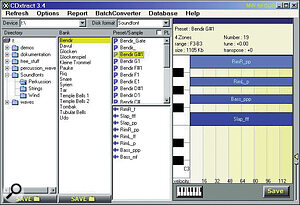 The latest CDxtract (version 3.4) reads Emu and Kurzweil formats, and can convert to Emagic's new EXS24 format too.

Although noise levels from hard drives have reduced in general over the last couple of years, and special low‑noise models like the above‑mentioned Fujitsus are available, most musicians would still prefer total silence in the studio. So since I wrote my feature on Acoustic Noise Reduction in SOS January 2000, I've been delving a little deeper into the specific issue of hard drive noise.

Such noise has two components: the idle noise of the motor when it's not being used, and the seek noise of the read/write heads when the drive is being accessed. The idle noise of most modern drives is now barely detectable above that of cooling fans — even quiet ones — but seek noises are normally considerably louder, as well as more intrusive. The many computer users now looking for quiet drives get very confused by the advice given by other users on Internet forums. Often the same model will be reported by one user as very quiet, and by another as having an annoying whine and intrusive seek noise.

While there will be small differences in noise between different samples of the same drive, the main reason for such conflicting reports is drive mounting. Most disk drives would be blissfully quiet when idling if they were placed on a cushion, because the only noise would be airborne. However, once clamped to the PC chassis they become much noisier, since the chassis amplifies the drive vibrations and acts like a loudspeaker — a phenomenon known as structure‑borne noise, which varies significantly between different PC cases. The majority of cases are made from sheet metal and sound like a drum when tapped. Although you can damp their panels internally, a much better solution is to buy one of the latest coloured polycarbonate cases, which not only tend to be thicker, but are also more solid. Such cases provide greater attenuation of both airborne and structureborne sounds from drives and cooling fans.

An even better solution would seem to be isolating the drive from the PC case, using some sort of suspension mount, such as the NoVibes ones from Noise Control (www.noisecontrol.de) that I mentioned in SOS January 2000. Once a drive is isolated, the only remaining noise is airborne, resulting in a typical noise‑level reduction of around 5dBA. However, the latest evidence seems to suggest that allowing drives to 'float' in a suspension mount can increase seek times, because the heads take longer to settle into their final position. Seagate have investigated, and have established that short random writes could be significantly slowed down, but that read throughput is unaffected. Fortunately, there are far more reads than writes in typical PC operation. Even products (such as GigaSampler) that rely on lots of seeks to stream voice data direct from the drive shouldn't suffer.

If your case is of the sheet‑metal variety, the SilentDrive sleeve (available in the UK for £24 from www.quietpc.com — see PC Notes October 2000) will provide some reduction in structure‑borne noise, but also a considerable reduction in airborne noise. Although, strictly speaking, 5400rpm drives are the fastest that can be sleeved, the lower temperatures of most of today's 7200rpm drives mean that these won't overheat inside the sleeve either. My PC is now completely non‑SCSI, and each of my two EIDE drives is mounted in its own SilentDrive sleeve, bringing the acoustic noise down to a whisper that can scarcely be heard from the other side of the room.

I've mentioned these two noise‑reducing products again because drive manufacturers are now admitting that while huge progress has been made in reducing airborne noise, the dominating factor is now structure‑borne noise. Some form of isolator mounting seems to be the only way to remove this contribution. You can also make DIY isolator mounts for fans, using rubber washers or even a piece of old rubber glove between the fan and the case.

Last month's arrival of Wavelab 3.03 must have been a happy event for users of the program, but some of them may by now have discovered that many of their existing preset collections have disappeared from view. Luckily I've managed to trace both the cause of this phenomenon and a temporary solution. The problem is that when searching for the relevant SET file in the Wavelab System\Plugins folder, Wavelab 3.03 mistakenly replaces any underscore symbols with spaces, and so can't find the correct file. The solution is to carefully replace any underscore symbols in each file name with exactly the same number of spaces. As soon as you do this, your presets will reappear.

• Bernard Chavonnet's CDxtract sample‑conversion utility for Windows 95/98 and NT has reached version 3.4. As before, it can read SoundFonts and SampleCell/PC files on DOS‑formatted drives, as well as a comprehensive selection of proprietary non‑DOS formats on CD‑ROM, Zip, Jaz, and hard disk — including Akai S1000/S3000, Roland S7xx, and SampleCell/PC files. Samples can then be saved in WAV, AIFF, or MP3 formats, and Programs can be saved, along with their respective samples, in SoundFont, Mesa, S5000/S6000, Reaktor, Pulsar, or GigaSampler formats.

New in this version is read support for the Emu EOS format (E4, E4k, E64, E64000, Esynth and Ultra products), Kurzweil K2000 and K2500 banks, and conversion to Emagic's EXS24 format. I recently used CDxtract to rescue data from some ailing 270Mb Syquest cartridges formatted by my Akai sampler. At just 79 Euros (£48.20), the full version is extremely good value for money.

These improvements will be of far more interest to games players than musicians, and performance with existing applications seems to be much the same as with DirectX 7.0. I'm always wary of making such low‑level changes to Windows unless there's some real gain to be achieved, and Steinberg have already gone on record saying that "Some users have experienced incompatibilities between Cubase and the newly released Microsoft DirectX 8. For now we recommend to use DirectX 7.0a instead." You have been warned.