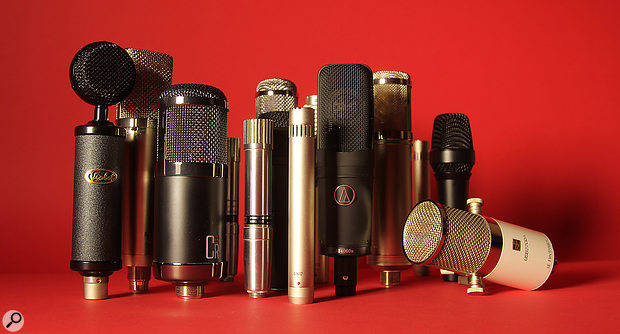 What are the pros and cons of the different types of microphone, and when would you want to use them?

We’re often asked at SOS what the ‘best’ of something is, and microphones are no exception. Unfortunately there’s no short answer — mics can seldom be said to be simply ‘good’ or ‘bad’; rather, a mic can be suitable or unsuitable, depending on how you’re using it. Confused? Read on...

Microphones can be divided up in various ways, but the two most important design characteristics are the pickup pattern and the operating principle. The pickup pattern, or ‘polar pattern’, describes how a mic responds to sound arriving from different directions. A so-called omnidirectional mic or ‘omni’ should, in theory, pick up sound equally well from every angle. At the other extreme, a mic with a ‘figure-8’ polar pattern will be sensitive to sound arriving at the front and back, but deaf to sound arriving from the sides. By combining these characteristics, a subsidiary polar pattern called ‘cardioid’ (because it looks heart-shaped!) can be created, which is most sensitive at the front and rejects sound to the rear.

Omnidirectional mics are often thought of as having the most ‘natural’ reproduction of sound, and one reason for this is that their frequency response is not affected by distance from the source. By contrast, figure-8 and other directional mics exhibit a phenomenon known as ‘proximity effect’ or ‘bass tip-up’, which means that when placed close to a sound source, they capture disproportionately more low-frequency sound. This effect can be useful in helping to beef up a thin-sounding source, but can also cause significant problems.

There’s far more to microphone directionality than I’ve got space to discuss here, but if you want to learn more, this is an excellent place to start: http://sosm.ag/mar07-polarpatterns. 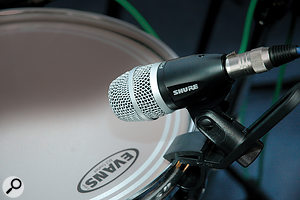 The ability of dynamic mics to be able to withstand high SPLs makes them ideal for loud sources, such as drums.

At heart, most mics on sale today employ one of two basic operating principles. Moving-coil dynamic mics employ a diaphragm (usually made of some kind of light plastic) with a metal coil attached to it, suspended such that the coil sits inside the field of a magnet. When the diaphragm moves in response to sound, the coil also moves and an electrical signal is generated in the coil. Moving-coil dynamics are relatively cheap to make, and most are very robust.

The down side (for there is always one!) is that, because the coil is usually relatively heavy, moving-coil mics tend to have a ‘sluggish’ response that inhibits their ability to react to high frequencies and fast transients. As such, they’re not usually people’s first choice for delicate acoustic recordings — but they very much are the ‘go-to’ type for things like kick and snare drums, guitar amps, brass instruments and live vocals, where an extended high-frequency response isn’t necessarily desirable, and where their ruggedness (which includes an extreme tolerance of high SPLs and being gargled by heavy-metal singers) are a real boon.

Moving-coil dynamic mics are nearly always designed to have a cardioid or similar polar pattern, though omnidirectional models are available for specialised purposes such as speech reporting. Most dynamic mics are also passive devices, meaning that they don’t require electrical power to operate.

Inside a capacitor microphone. The capsule (the round gold bit at the top) is a capacitor, the front plate of which functions as the mic’s diaphragm.

The other main type of microphone design in widespread use is the capacitor mic. These too employ a diaphragm made of plastic or other material, but in this case the diaphragm is coated with an extremely thin layer of gold or other metal, and is placed in front of a charged backplate to form a variable capacitor. As it moves in reaction to sound waves, the capacitance of the capsule varies and an electrical current is generated. As the impedance of the capsule is very high and its output level very low, capacitor mics always incorporate active circuitry to amplify the signal and present it at an impedance suitable for connecting to other devices. This means that they require external power; some have their own power supplies, but most work with the 48V phantom power that is standard on mixing consoles and preamps. Generally speaking, capacitor mics show the opposite traits to moving-coil dynamics: they tend to have excellent high-frequency resolution and are usually quite ‘hi-fi’, but can be less robust.

It used to be the case that capacitor mics were much more expensive than dynamics, but that playing field has levelled to a large extent, especially in the sub-£300$500 range — you can get extremely serviceable capacitor mics for that kind of sum, and many premium dynamic models exceed it. I’ve already listed some typical situations that call for a dynamic, but if you’re looking for drum overheads, or need to mic up any stringed instruments (acoustic guitar, violin, 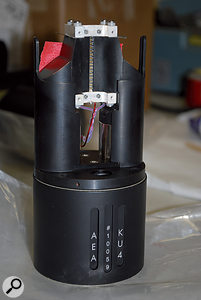 Inside a ribbon mic. The crinkled metal you can see is the ribbon, suspended in the middle of a chunky magnet. harp and so on), then a capacitor mic will often be the best choice. Ditto if you want to record multiple instruments in a room with one mic, or perhaps a stereo pair.

Capacitor mics can broadly be split into two camps: those with a large diaphragm — typically around an inch across — and those with a small one, of around half this diameter. Many large-diaphragm capacitor designs employ a single, circular polarised backplate with diaphragms on either side and ports which allow some sound to enter behind the diaphragm. This, in effect, gives both the front and back diaphragms a cardioid pickup pattern. By combining the signals from the front and back diaphragms in different ways, approximations to omni and figure-8 polar patterns can be created, and thus many large-diaphragm mics offer switchable pickup patterns.

Small-diaphragm capsules use a slightly different design which usually has a fixed rather than a variable polar pattern. However, some manufacturers have developed modular systems, where a cardioid capsule assembly can be unscrewed and replaced with an omni or other capsule if required. Sonically, small-diaphragm mics are often thought to be more accurate to the source, and in directional models, any sound that is picked up from the sides or rear often retains a reasonably natural quality. Large-diaphragm mics have different strengths, including lower noise and a tendency to sound slightly ‘larger than life’ that’s often employed to good effect on close-miked vocals and other instruments.

Finally, it’s worth pointing out that not all dynamic mics use the moving-coil principle. Ribbon mics use a thin strip of metal foil, suspended between the poles of a magnet. The ribbon flaps about in accordance with any acoustic flapping going on about the place, and a commensurate current is induced in the ribbon. The ribbon is extremely thin, however, so this kind of mic tends to be very fragile, as the ribbon will easily tear if subjected to knocks and bumps, or strong gusts of air. One thing that distinguishes ribbon mics from other dynamics and capacitor mics is that they have a very precise native figure-8 polar pattern that can achieve impressive rejection of unwanted sound from the sides. Sonically, their high-frequency response is often curtailed, but where that trait might sound ‘dull’ in a moving-coil mic, in a ribbon it’s often better described as ‘smooth’: perfect for taming sibilant vocalists and scratchy instruments.