Martin Walker tries out new VST Instruments and plug‑ins, and reports on his personal experiences with a MIDI hardware controller.

Though software synths can present their own control problems (see the 'Mouse‑Free Music' box elsewhere on these pages), they're still a growing phenomenon, with more being released all the time. Building on the success of their freeware Tau TB303 emulator, Muon Software have launched a new PC/Mac VST soft synth called Tau Pro. This acid bass/lead synth design offers many more features than its simpler predecessor, and though it's not free, its $30 shareware price won't break the bank.

Tau Pro features two alias‑free oscillators (instead of the single oscillator of Tau), each with a choice of 11 waveforms: sine, five sawtooth, and five square, with the extra sawtooth and square options having additional high harmonics added. Unusually, all eleven waveforms can be pulse‑width modulated, which provides a huge choice of basic oscillator sounds, from thin and metallic through to rich and fat, with plenty of built‑in movement if required.

The oscillator outputs can be mixed together, or you can set VCO2 to sync with VCO1. Ring modulation is also available. The next step is the filter, where one of three filter types — classic 18dB/octave, Hi‑Q 24dB, or 'Phat' 36dB — can be chosen. In keeping with the '303' inspiration for Tau, the filter frequency has simple EG Mod and Decay controls, along with Accent Threshold and Level controls to trigger dynamic variation once MIDI velocity exceeds a user‑selected value. After the filter comes the Drive knob, which provides controllable amounts of odd‑order harmonics for 'analogue' overdrive effects.

Tau Pro's effect section provides a selection of chorus, flange and delay algorithms, which add further richness and interest to the sounds. The front panel is completed by the Master Section, featuring a small 16‑note keyboard for quick mouse‑click sound auditioning, and the overall Volume, Glide time and Retrig controls.

The Glide knob is used in conjunction with the Retrig toggle switch beneath it. When the latter is set to 'On', you get variable‑speed portamento as you slur from one note to the next without releasing the previous one, and the envelope is not retriggered. However, if you play cleanly, lifting each note before playing the next, the envelope retriggers each time, and the pitch slide is disabled. With a little practice this legato mode is very expressive.

A useful switch is available for changing the knob control mode between 'drag in a circle' (useful for fine adjustments, but prone to lurches when you first grab a knob) and 'drag up or down' (no lurching, but sometimes less precise). Another switch enables/disables a pop‑up box alongside the cursor that provides a readout of the current parameter value. Every one of the front‑panel controls can receive MIDI continuous controller information for remote real‑time tweaking or automation purposes — they are hardwired to controllers 75‑97.

Both Tau and Tau Pro are monophonic, as befits a bass/lead synth, but of course this keeps CPU overhead right down — even on my 450MHz Pentium II it was well under 10 percent. Muon are proud of their Audio Engine, which uses 64‑bit DSP "to accurately replicate the warmth and richness of a classic vintage synthesizer without aliasing noise". It certainly sounded clean to me, as well as extremely dirty when required, and I was impressed with the range of sounds on offer.

The 32 presets supplied range from analogue to digital, with plenty of throbbing basses and searing leads, plus loads of movement from the built‑in effects. As with Native Instruments' Pro 52, these add a great deal to the end result, as well as making results sound far more fully‑formed than those you can achieve using many other soft synths. It's a shame that Tau Pro doesn't respond to external pitch‑bend, but even so I soon had my Control Freak MIDI controller mapped to the synth's front‑panel controls for some nifty real‑time action. If you want a monophonic synth with attitude, you should put this on your shortlist, especially at the bargain price of $30. 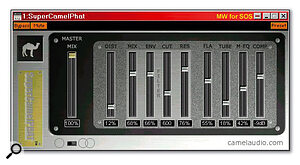 Camel Audio's SuperCamelPhat passes your audio through a series of effects designed to give it more punch. It also has a button that randomly generates presets — here's one I made earlier!

In a world full of copycat plug‑ins, it's good to come across something different. Written by programmer Ben Gillett under the CamelAudio moniker, CamelPhat is designed to give basslines and drums more punch. It does this in a variety of ways, including guitar and tube distortion, a resonant filter, and soft limiting. Ben sent me the SuperCamelPhat, is a rather more advanced shareware offering costing $29. It adds an envelope follower for the filter (to auto‑sweep its frequency), a basic flanger, a specially designed 'Magic' EQ to give a punchy bottom end, and a mono/stereo switch.

Although the interface is basic, combining a number of effects into one plug‑in creates an extremely versatile product; it reminded me of a cut‑down version of Waldorf's excellent D‑pole filter. However, the masterstroke in both versions of CamelPhat is the 'Random Camel' logo — clicking on this generates a randomly generated preset. Great fun, and wonderful for anyone into sound mangling! 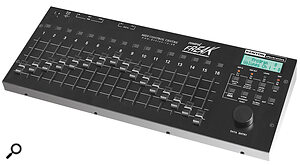 I've been feeling increasingly frustrated with having to use a mouse to control my music gear, and after finding that aversion to mouse control is one of the main reasons why some musicians still avoid soft synths, I decided to make MIDI control surfaces the subject of this month's PC Musician feature. Since this meant I needed to do some research into the budget controllers currently available, I was able to narrow down the options and decide on one for my own use.

What I needed was a fully programmable model, preferably with a PC editor, and with sliders rather than knobs, largely because you can move several sliders simultaneously if necessary. The perfect controller for me turned out to be Kenton's Control Freak Studio Edition. SOS reviewed the original eight‑fader version in November '98, but the latest 16‑fader Studio Edition has double the number of controls for only £50 more.

The Control Freak SE can hold up to 64 'profiles' in its Flash Memory (128 for the original Freak with half as many controls). Once I'd downloaded the freeware PC editor software I found the best way to proceed was to discard all pre‑loaded profiles for gear I didn't own (the factory presets can be restored later if required), and then download immediately useful presets into the lower‑numbered profiles for quick access. Several hundred profiles, supporting a wide range of synths and software applications, are available in zipped form from Kenton's web site, for both the eight‑ and 16‑slider models, and you can also load the eight‑slider profiles into the Studio Edition. As you might expect, recent additions include a selection of Kenton Plugstation (see review in SOS August 2001) setups for both models, controlling an SW1000XG submix, routing and mix for the four 24‑bit Y Board outputs, sound selection for each PLG card, and so on.

Since the SOS review, both Freaks have gained extra features, the most significant being SysEx load/save for the entire contents of the machines, and the ability to use the rightmost slider to supplement the data wheel in edit mode (I found this made entering text, for example, far quicker). The latest update to the operating system (version 4501/420) is a simple DIY chip replacement that Freak owners can order direct from Kenton for £15 plus VAT. This adds a Soft Thru on/off function, lets you set a MIDI channel for remote profile selection using Program Changes, and adds the ability to 'press' buttons remotely using MIDI Note numbers 36 and above. The new 'Erase Program' function lets you wipe any number of profiles in one swoop, and 'Scene Memory' lets you store the positions of sliders as a 'scene'. Up to 256 scenes can be stored, and you can Send out their MIDI data on demand — handy for automation snapshots or synth edits. While in this mode, moving any slider displays both the saved scene value and the current value of the slider in the LCD window, so you can match up the controls if you wish.

Programming my own profiles proved to be fairly easy, even without the PC editor, and the first thing I did was to allocate two adjacent sliders to generate MIDI controller 16 and 17 data, giving my Wavestation SR a virtual joystick (a real joystick appeared on other Wavestations but not the SR). Many of the synth's preset Performances map X‑Y axes to mix between different voice layers, or adjust reverb or effects depth, and using two adjacent faders on the Control Freak I was able to access this performance feature.

In future I might plug a real joystick into the two inputs on the Freak's rear panel. These can accept a signal (0‑5V) for basic CV‑MIDI conversion, or are compatible with variable controllers such as footpedals and joysticks, or switched controllers such as sustain pedals. For now I'm still using my old Korg M1 as a master keyboard, but my footpedal doesn't sweep the full 0‑127 MIDI range using its pedal input. So I instead plugged the pedal into one of the Freak's external inputs and used the Freak's scaling function to remedy this deficiency. Thus, in its first day of use, the Control Freak solved two of my studio problems.