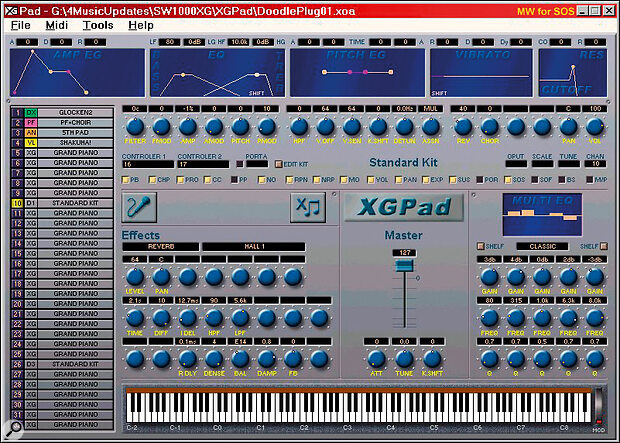 XGpad is a new editing utility for owners of the huge range of Yamaha XG‑related products — notice that the first four parts have patches selected for DX, PF, AN, and VL daughterboards (see PC Snippets).

Martin Walker takes a look at the latest update to the Nemesys Gigastudio, and reports on a disturbing trend for shareware developers.

When I reviewed Gigastudio 160 from Nemesys, back in SOS November 2000, it was at version 2.0, and I was extremely impressed with its combination of 64 MIDI channels and up to 160‑note polyphony, along with low real‑time latency, if used with soundcards that have GSIF‑compatible drivers. I've used it ever since, and apart from a few battles for supremacy when it's running alongside Cubase VST, I'm even more impressed now, especially as the new Gigaformat sample libraries go from strength to strength.

Now Steinberg's HALion sampler has finally appeared, offering the first alternative with hard‑disk streaming, and in the long term I'm sure it will attract many library developers who already support Giga products. However, Nemesys haven't rested on their laurels. Version 2.2 of Gigastudio has been out for a few weeks, and this free update for existing users provides various new features and improvements. 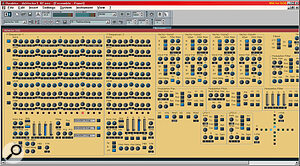 First up is a greatly improved QuickSound database that can apparently perform up to 50 times faster when searching your hard drives for compatible audio files. You can now also specify which drives, folders and file types are scanned — a real timesaver when you have all your Giga files carefully stored on a dedicated hard drive for optimum streaming performance.

Once the scan is complete, you can search for suitable sounds using one or more keywords. For those with huge libraries these new search facilities will be invaluable. One of the reasons they've appeared now is the launch of the 50‑CD Hollywood Edge Premier Edition sound‑effect library in Giga format. This contains a vast selection of spot effects suitable for film and TV production, game development, and even music, and using the enhanced QuickSound database facility you can enter advanced searches such as 'phone ring NOT bell' or 'animals NOT (bird OR cat)'. The ability to trigger up to 160 different audio events makes Gigastudio ideal for sound effects, as well as complex film scores.

For those, like me, who run a sequencer on the same PC as Gigastudio, a new set of sequencer priority settings helps you achieve higher polyphony and lower sequencer latency figures, with fewer conflicts. Those who create their own sounds will also be pleased at the much speedier launching of the editor when it's opening large instruments, due to the addition of 'acceleration tags', as well as better Import and Export facilities, and velocity‑curve scaling for creating the perfect keyboard response.

The program's sampling engine has also been enhanced, with filter and amplifier envelope times now controllable over MIDI, while the filter response has been made faster and smoother when controlled from the LFO and external controllers. It's now also possible to create a GIG file from a collection of WAV files without opening the editor at all, using the right mouse button. A host of smaller tweaks and improvements includes support for the new EgoSys EWDM drivers, plus the inevitable raft of minor bug fixes.

Sadly, Nemesys still won't support either DirectX or ASIO‑format plug‑ins inside Gigastudio, as this will "compromise its robustness, latency, and polyphony" — all major selling features where professional musicians are concerned. Instead, they have developed their own proprietary NFX plug‑in format, as used by the four plug‑in effects that are bundled with Gigastudio 160. This standard is now available to third‑party developers, but few so far seem to have committed to it, other than Alien Connections with their ReValver amp modelling plug‑in. However, compression and mastering EQ have been mentioned as future possibilities. The limited third‑party take‑up of NFX to date is a great shame, since the current lack of highquality plug‑in effects makes GS far less flexible unless you use a multi‑output soundcard.

Despite this, Gigastudio is now a mature and extremely reliable application used by major‑league professional musicians around the world, and with a sound library to die for. It will be interesting to see how competition develops over the coming months.

Shareware developers produce many superb products at pocketmoney prices. A huge number of man‑hours generally go into such products, but free of the expenses of CD duplication, fancy packaging, international marketing and the mark‑ups associated with retail channels, they can be offered to you and me at prices far lower than commercial offerings. I've reviewed quite a few such shareware offerings over the years in PC Notes and, as a former software developer myself, fully appreciate the amount of work that goes into them.

The vast majority of these developers are very conscientious about user support as well, often responding to bug reports very quickly, entering into personal correspondence with individual users, and even incorporating user suggestions into future upgrades. I know from personal experience what a warm glow you get from seeing a few of your suggestions incorporated into the next version of someone else's application, and have frankly been amazed at how quickly some shareware developers have been able to respond to my comments.

However, this personal service becomes extremely difficult to maintain once a product gets to a certain critical mass, and most mainstream commercial developers, while still open to user suggestions, have to take a few steps back, so that their teams of programmers can carry on unhindered until the current version is complete, before they can consider incorporating any of these suggestions in the next build.

In view of all the above, I've been rather disturbed by a new trend that seems to be developing, as more and more comments in user forums suggest that "give it to me cheaply" is slowly but surely mutating into "give it to me for free."

Now, many shareware developers (and even a few commercial software developers) have released the occasional 'freebie' — either an extremely simple product that doesn't warrant a price tag, or a junior version of a program they hope users will eventually upgrade to at a reasonable charge. There will also always be some talented developers who are happy to write and release all their products as freeware, either because they also have a day job, or are in fulltime education and have the time to do it for fun.

However, by and large, in order for someone to devote all their time to developing new and exciting products for us all to enjoy, they have to be able to pay the bills, and this means charging for their time, even if it's only a modest amount per item. I find it sad that so many people seem prepared to fork out for the very latest PC hardware, faster and faster processors, more and more RAM, and increasingly capacious hard drives, but seem unwilling to give a few tens of pounds to a developer who has spent literally hundreds of hours perfecting a genuinely useful shareware product.

I've recently spoken with established shareware developers who have already shelved great products "in development", saying that there's no longer any incentive to produce useful, basic stuff selling for £20 or so. It's bad enough that high levels of piracy have already caused some commercial software developers to stop producing products for the PC altogether. Let's hope that the shareware scene doesn't start going the same way. Sadly, if it does, we will only have ourselves to blame.

When I recently reformatted my hard drive and reinstalled Windows from scratch in three separate partitions, followed by a host of applications, I decided to document the procedure for future reference. Rather than use a word processor, I launched Notepad and created a simple text file. (In this I now jot down each application and hardware driver file that I install in each partition, along with any subsequent update files.) I also made notes of the settings I chose during the Windows install itself, as well as all the operating system tweaks I implemented in each partition.

I stored this text file on my Data partition so that it's visible from each of my three multi‑boots, and the result is that I now have a master list containing everything that's currently on my PC. This not only helps me remember what patch files I need to keep, in case I ever get any problems in the future, but in the long term it will also make it far quicker if I upgrade to a different PC, as seems likely in the near future. It certainly beats the panic that some people face when buying a new PC, when they simply can't find remember what's on their old one, and don't know what to keep and what to discard.