You might think you can hear that one sequencer sounds better than another, but are you fooling yourself? Your PC can help you find out. But first, if you're thinking of building a new computer, read on...

Things change extremely rapidly in the world of PC components, so it's probably about time I updated the parts recommendations I gave in SOS February 2007 as part of my 'Specifying & Building A Dual-core Desktop PC' feature. At the time I ended up choosing an Intel E6600 2.4GHz dual-core processor, but I'd now recommend a Q6600 quad-core processor, with all four cores clocked at 2.4GHz. With most audio software the latter will yield up to double the performance of the dual-core processor, yet as I write this the Q6600 only costs around £30 more than the E6600, at just £170, making it an absolute bargain!

My choice of motherboard was Intel's DP965LT, due to its combination of competitive price and generous complement of PCI and PCIe slots, plus USB 2 and Firewire 400 ports. However, while this motherboard does support the Q6600 processor (courtesy of a BIOS upgrade), I'd recommend that anyone building a DIY PC from scratch today should consider Intel's DP35DP. As its name suggests, the chip set used is Intel's newer P35, the 'replacement' for the P965. Compared with the DP965LT, the DP35DP provides the same complement of three PCI slots, three PCIe x1 slots, one PCIe x16 graphics slot and two IEEE 1394a (Firewire 400) ports, but ups the complement of USB 2.0 ports from 10 to 12. 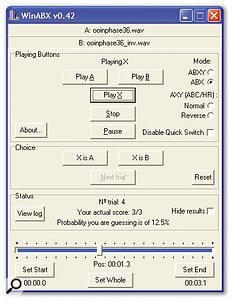 If you want to find out whether one sequencer or plug-in is truly better than another, try an ABX test (see next page for more details).Both Intel motherboards support up to 8GB of system memory, and both specify that you fit 1.8V DDR2 SDRAM, such as Corsair's Twin 2X2048-6400C5 DHX (Dual-path Heat Xchange) with the new Dominator Heat Sinks for maximum cooling, which you can currently buy for about £125 for 2GB. It is possible to save some money by installing Corsair Twin 2X2048-6400C4 RAM, which is significantly cheaper (around £50 for 2GB in the UK), but some people have had problems booting the DP35DP motherboard with this installed. It's up to you whether you want to take this risk.

When choosing a graphics card you could stick with my previous recommendation of a fanless Nvidia Geforce 7300 model, which is still perfectly adequate for the musician, as well as being very reasonably priced. However, a card such as the GigaByte 8600 GT silent model might be a better bet if you want to future-proof your PC, as it adds support for DirectX 10.

DirectX 10 (Microsoft's latest graphics technology, offering new levels of 3D realism and detail) is only currently available to Windows Vista users, and not as an upgrade for Windows XP. This has enraged games players (arguably the people that are likely to benefit most from the improvements), because, according to on-line surveys, less than 10 percent of them have moved over to Vista, with the knock-on effect that few game developers are bothering to support DX10. Nevertheless, if you intend to move over to Vista during the life of your new PC, having a DX10-compatible card might be worthwhile.

I still stand by the hard drive recommendations I made in my February 2007 article (Seagate, Samsung and Western Digital) but most manufacturers, including the three that I've just mentioned, now make very quiet drives at very low prices. I bought 250GB models, but with 320GB drives now selling at an absurdly low £50, you might want to install this slightly larger capacity (especially since sample libraries seem to be getting bigger by the day). I'm still very pleased with the Pioneer DVD burner I fitted, and with my UK-built PaQ case (www.paqt.co.uk).

To remove any preconceptions or unintended bias from audio comparisons, you need to listen to each in turn without knowing which one is which (a blind test). You could ask a friend or colleague to switch between the two, but they might inadvertently do or say something that sways your decision. The most reliable way to compare two audio plug-ins, sequencers, or any other audio products is, therefore, to perform a double-blind test — one in which you have no idea which of the products you're listening to, and neither does the switcher.

Implementing double-blind tests is an ideal task for the computer, and there's a very good freeware utility, named ABX, that does exactly that (www.kikeg.arrakis.es/winabx/winabx.zip). I first mentioned ABX way back in PC Notes November 2000, but since then its interface has been enhanced and there are now lots more example files to download from the associated web site to test out your powers of audio discernment.

All you do is launch the ABX utility and choose an 'A' file and a 'B' file in WAV audio format. Then you can start testing. You can audition either file at any time using the 'Play A' and 'Play B' buttons, and switch between them at will while they are playing, but the trick is to then click on the 'Play X' button and decide whether it's 'A' or 'B'. Once you've done at least five such comparisons, the statistics readout will show whether you're guessing or can reliably tell a difference.

There's a Training Room (www.pcabx.com/training) where you can download tests for tone quality, loudness differences and harmonic distortion, and a Technical Listening Room (www.pcabx.com/technical) with files of differing bit-depths and sample rates, with polarity inversion, added jitter and low-pass and high-pass filtering, all of which will enhance your audio discrimination.

To test out different sequencers or plug-ins, just choose a suitable audio file or files as an input signal (from commercial tracks or your own songs), export the output signal from each sequencer or plug-in in turn as a separate WAV file, and then load them into ABX to see whether or not you can really tell one from the another, or whether you've been fooling yourself. You might even discover that you prefer the sound of a freeware plug-in to an expensive commercial alternative!

* Keyboard & Mouse Sharing: Do you fancy sharing your mouse and keyboard between multiple computers without needing a KVM (Keyboard Video Mouse) hardware switching box? Synergy is a shareware utility that runs on Windows 95, 98, ME, NT, 2000 and XP, as well as Mac OS 10.2 and higher and Unix across a TCP/IP network. You still need a separate monitor screen for each computer, but swapping from one to another is as simple as moving your mouse off the edge of one screen and onto the next, since all the monitors form a single large virtual screen (screens can be arranged side by side, above and below, or in any combination of orientations). Meanwhile, anything you type on your keyboard is sent to the screen containing the 'active' mouse cursor. Clipboards are combined, so you can cut and paste data from one machine to another, and if you have an active screensaver this can kick in on all machines simultaneously. Many thanks to SOS reader Jayne Drake for letting us know about this handy utility! http://synergy2.sourceforge.net

To simply play back some audio files from hard drive, many PC musicians reach for Microsoft's default Media Player, which plays a wide variety of video and audio file and playlist formats. However, there are plenty of other software media players that are either more versatile (supporting a wider selection of audio formats or offering lots of plug-in extras) or easier to use. You can find a representative list for a range of operating systems on Wikipedia (http://en.wikipedia.org/wiki/Com...).

For example, for playing back RealMedia files I've abandoned the rather bloated Real Player with all its background processes, registration forms and advertising, in favour of the much slimmer and less demanding Real Alternative (www.free-codecs.com/download/Real_Alternative.htm), which includes the Media Player Classic graphic interface. 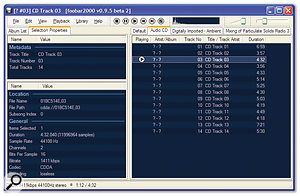 While its interface might be bland, foobar2000's audio options include Kmixer and ASIO driver support, plus a software DTS surround decoder, making it of particular interest to the PC musician.The most popular alternative player must be WinAmp (www.winamp.com), although the huge 2655 graphic skins and 3576 plug-in extras currently on offer can be rather overwhelming. Nevertheless, once you wade past the host of plug-ins offering basic effects such as EQ, compression and reverb, there are some that can be of genuine use to the musician, including binaural and surround offerings for improved headphone listening. However, just as with RealPlayer, some WinAmp users are beginning to find the latest versions of the player rather bloated.

If you fancy an audio player with a minimalist and easy-to-use interface that doesn't have graphic bells and whistles, Peter Pawlowski's foobar2000 (www.foobar2000.org) could well suit you. It supports a wide range of both high-resolution and compressed audio formats (although not RealMedia, as yet), there are options for dithering and noise shaping, so you can play back exotic files through more mundane audio interfaces, and it's also hugely configurable.

However, it's the various additional downloadable components (http://wiki.hydrogenaudio.org/in...) that make foobar2000 specially interesting to the musician. These include Kernel Streaming support, which, as I explained last month, lets you bypass the Windows Kmixer when using Wave/MME drivers, thus avoiding 'behind the scenes' sample-rate conversion. Another option is ASIO support (rare in mainstream audio players), which not only avoids SRC but also offers much lower latency, and there's also an Impulse Response Convolver, so you can add captured reverb and other effects to audio playback.

Perhaps the most unusual offering is a software decoder for DTS (Digital Theatre Systems) surround-encoded audio files (www.saunalahti.fi/~cse/foobar2000/foo_input_dts.zip). Foobar2000 even includes ABX comparator functions, as discussed earlier, with the added advantage that you can compare different audio file formats, such as WAV and MP3 (to see if you can reliably hear what's been discarded by the conceptual codec), or different MP3 bit rates. Foobar2000 is now my default player for CD audio, WAV files and Internet-radio listening.