What Price an App? By Martin Walker

As they scramble to catch up, Microsoft may have priced themselves way out of the tablet game...

They may be late to the app party, but Microsoft seem desperate to play catch up. The Windows 8 App Store (www.windows8appstore.com) debuted with about 10,000 apps in late October. However, by the start of January 2013 there were already in excess of 35,000 available, and by the time you read this in February 2013, the Windows 8 Apps avalanche is expected to have reached 50,000. Compared to over 700,000 apps available in Apple's Store, this is still chicken feed, but around 500 new PC apps are added each day, and a significant proportion of them are free. While this is good for users, I can't help thinking that we're sending out a message that free software is the way to go, and I do fear for smaller developers in the longer term when they attempt to make a living from their skills. 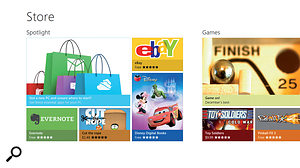 The Windows 8 App Store should already have more than 50,000 apps available by the time you read this, and is already awash with free games, but there's little sign of any significant music or video apps as yet.

Unfortunately, sales of Windows Surface tablets running Windows 8 RT are still very disappointing, with estimates of only around one million worldwide since launch. These tablets are perceived as too expensive, the bundled software (such as Office 2013 RT) is somewhat limited compared with its standard Windows namesake, and users are (currently at least) forced to run Internet Explorer as their browser whether they want to or not, with no web plug-ins and limited Flash content only visible on Microsoft-approved web sites. Surface RT prices might be forced down if their was competition from OEM hardware manufacturers, but they are hardly being encouraged to market Windows RT-based devices with such sluggish sales. Moreover, many of the apps mentioned above are proving to be disappointing at best and a waste of time at worst, and since Windows RT will only run apps available from the official Windows Store, Microsoft have a stranglehold on both software developers and hardware makers.

As I've mentioned several times now in this column, Microsoft's Surface Pro (powered by an Intel Core 5 processor running the full version of Windows 8) is likely to be significantly more popular, simply because it can also run the wealth of standard Windows software that's available, and this is likely to include plenty of well-known music software. Surface Pro devices are already rolling off the production lines as I write this in late January and will be available for purchase in the US and Canada in early February, although some potential purchasers have already been put off by the price. Starting at $899€675 for the 64GB version without a keyboard (available separately for around $100€75), the final price of the Surface Pro is likely to be over $1000€750, putting it in competition with quite a few other PC Ultrabook models. It also puts it into direct competition with the likes of the 11-inch Apple MacBook Air, although this doesn't have the Surface Pro's 10-point multi-touch screen and pen input, and is slightly thicker and heavier. It will be interesting to see just how important the public at large rates the touchscreen experience, and whether they succumb to Microsoft's rumoured TV ad campaign. This healthy competition may force down Surface Pro pricing. After all, as I reported last month, the original Surface was originally available only from Microsoft, but is now being stocked by various third-party retailers, which proves that Microsoft can change their marketing strategy. 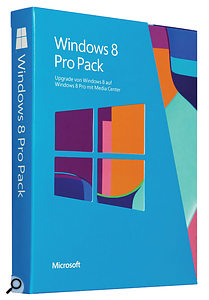 The Windows 8 honeymoon is over; pricing has now reverted to 'normal'.

Finally, I do hope everyone took advantage of the excellent Windows 8 introductory offers (yes, I bought my downloadable upgrade from Windows 7 for £15$15 before the January 31st deadline). If not, the price has now returned to 'normal' — and at $120 for the Windows 8 (Core) Upgrade and $200 for the Windows 8 Pro upgrade, it seems to have put some users into a state of shock and disbelief, despite these figures being exactly the same as those for the previous Windows 7 upgrades. As I write this, the official UK pricing hasn't been announced, but if it's in line with US pricing, the Pro upgrade should cost around £125. I expect that the pricing announcement resulted in a final flurry of bargain upgrades before the deadline, and a plummet in sales thereafter (especially since upgrades to Apple's OS 10.8 Mountain Lion remain at £13.99$19.99), but we shall see.

General Electric Cool It: Based on electric cooling elements originally developed for use in jet engines, GE have announced Dual piezoelectric Cooling Jets (aka DCJ), which replace traditional cooling fans with piezoelectric elements that contract and expand like human lungs to create airflow. At just 4mm thick and drawing less than half the power of standard fans, they will be ideal for the new slimline laptop and tablet formats, but I can also see them being used in desktop PCs, because they operate in almost complete silence. I'll have two please!

Intel Motherboard Shock: Intel have announced that they are quitting the consumer motherboard business after 20 years, ending all production and development after their next CPU is introduced. Intel motherboards have long been favoured by some specialist audio PC builders because they tend to offer 'rock solid' stability, albeit sometimes at the expense of overclocking options. This reputation started to change back in 2008 when Intel first released their enthusiast gaming Skulltrail motherboard with two Intel Xeon processors re-branded as Core 2 Extreme QX9770. Skulltrail was said to be ahead of its time: very overclockable, but also very expensive. Sadly, this is now all history.