With the Windows 8 release date fast approaching, we look at real-world performance results from beta users.

Back in PC Notes October 2012, I mentioned that some mainstream PC manufacturers and vendors were trying their best to avoid a slump on new machine sales in the run-up to the 26th October release of Windows 8 by offering to refund the upgrade cost. This was in an effort to encourage customers to part with their money now, rather than hang on for Microsoft's latest operating system. However, according to my sources at various specialist audio PC vendors, musicians are avoiding the shock of the new, with waiting lists for Windows 7-based audio PCs now longer than ever.

Opinion also seems even more polarised for and against Windows 8 than in the pre-launch run-up. Some users are already so enthusiastic at the prospect that they may well camp out to get the first retail copies, while at least three specialist audio PC vendors claim they won't touch its new interface with a bargepole until they absolutely have no choice.

I still expect Windows 8 to be a popular upgrade for the musician, especially until the end of January 2013 while the bargain price of $39.99 for an upgrade from Windows XP, Vista or 7 remains in place, and the even cheaper $14.99 for those who bought Windows 7 more recently than June 2012. However, various online audio performance claims for Windows 8 beta compared with Windows 7 are downright confusing to say the least, so I can fully see why musicians seem to be exercising caution.

Cakewalk's blog (http://blog.cakewalk.com/windows-8-a-benchmark-for-music-production-applications) claims CPU improvements of between 17.5 and 30.6 percent running Sonar X1. At the other end of the spectrum, one Cubase 6.5 user documented drops in performance of between 30 and 50 percent when running a DAW Bench benchmark utility. But they measured very similar performances between the two Windows versions with a couple of USB audio interfaces (for a full discussion on this go to www.gearslutz.com/board/music-computers/762183-my-windows-7-vs-windows-8-dawbench-results.html). These Cubase tests were subsequently repeated by DAW Bench developer Vin Curigliano, who concluded that the performance of Windows 7 and 8 was almost identical when running both Cubase 6.5 and Sonar X1 using an RME HDSPe audio interface (which is generally regarded as having the most efficient drivers available). 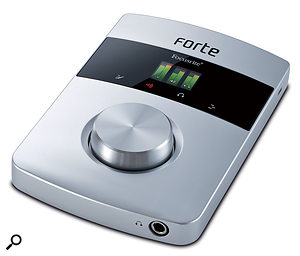 Congratulations to Focusrite for being one of the very few audio interface manufacturers to post official Windows 8 compatibility information for the Forte, before the release date!From these and other anecdotal online reports, it seems that audio interface performance can be a huge variable for Windows 8 performance, particularly with Firewire-based models. As I've said before, the majority of Windows 7 drivers should also run well under Windows 8, but there is no guarantee. Moreover, audio interface manufacturers can be extremely slow off the mark (some took a year to release official Windows 7 drivers after its release!), and a quick Internet sortie demonstrated that nothing has changed: of around a dozen interface manufacturers' web sites I visited a week before the Windows 8 release, only Focusrite had confirmed the compatibility of their drivers with it, despite nearly all manufacturer's forums being awash with user queries on this topic.

The availability of efficient, bug-free hardware drivers can make or break PC audio performance, so let's hope a little more effort is put into this area before too many early adopters start complaining. I know manufacturers aren't legally obliged to write new drivers for each operating system that's released, or even to check that their existing ones will still work on it, but they will undoubtedly attract a lot of flak if they don't.

If you're considering the jump to Windows 8, it's vital to make absolutely sure all your hardware items have suitable drivers or you won't be able to use them. Don't forget the smaller items either: I've already noticed a few Windows 8 beta users reporting problems with dongle performance. These range from occasional PC crashes and slow licence-scanning times with an iLok (although the iLok web site does claim compatibility with Windows 8) to not being able to run Waves plug-ins at all from a valid USB flash drive licence (I could find no mention of Windows 8 on the Waves web site). Let's hope such frustrations can be quickly resolved. Meanwhile, one Pro Tools owner reported getting the latest version of Pro Tools to run under Windows 8 by first installing Pro Tools 10, then installing Pro Tools 9 and then uninstalling Pro Tools 9. I suspect we're all in for some fun until the dust settles!

Ironically, as I sit writing this column, I've today taken delivery of a set of components to build my next PC, and they include a copy of Windows Home Premium 7 64 bit. I totally rely on my PC for daily audio work, and simply can't risk finding myself unable to use this new machine for any unexpected reason. Of course I'll take advantage of the $14.99 Windows 8 upgrade offer mentioned above, but I won't be installing it for daily use for at least a month or two (and possibly even longer), until I'm absolutely convinced that there are confirmed and measurable audio performance reasons to do so. I'll keep you up to date with developments!

Shell Out For The Classics 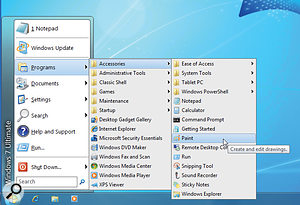 Windows 8 Metro interface too different for you? Try the freeware Classic Shell utility to reinstate your familiar favourite buttons and menus.

If you do upgrade to Windows 8 but find the GUI changes a bit too radical, why not try Classic Shell (http://classicshell.sourceforge.net)? This freeware utility runs on both Windows 7 and Windows 8, and is in effect a clone of the original Start menu found in Windows versions from 95 to Vista. It's available in both 32-bit and 64-bit versions across 35 languages, offers the familiar start button, cascading menu structure, and even reinstates the Windows Explorer toolbar. A Classic indeed!