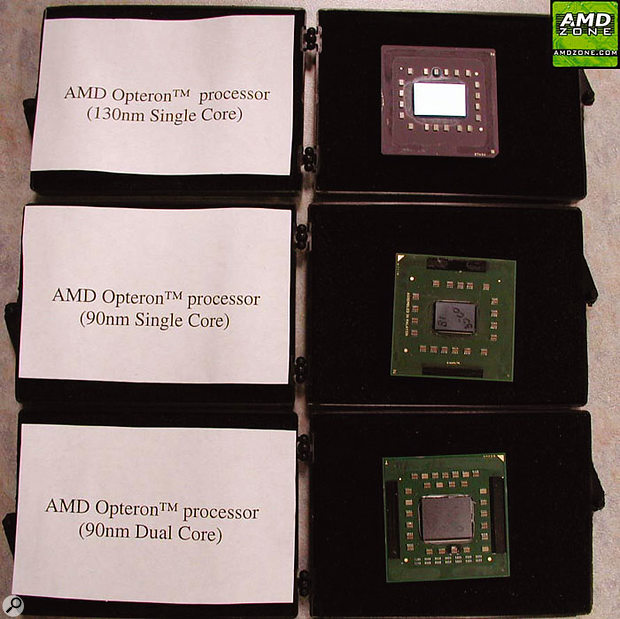 This photograph, courtesy of AMD Zone, shows that a dual-core Opteron processor could use exactly the same package as a single-core model, providing a possible upgrade path for owners of some existing Opteron motherboards after a BIOS update.

Intel abandon their 4GHz Pentium processor speed target and shift their attention to the dual-core technology first espoused by AMD. Whatever is going on?

In a surprise move announced in mid-October, Intel have abandoned their plans to release a 4GHz version of the Pentium 4 Prescott processor (originally promised by the end of 2004) and have moved their engineers onto other projects. They are now focusing on other Pentium 4 processor models with up to 3.8GHz clock speeds, initially increasing their performance using a larger 2MB Level 2 cache similar to their expensive existing 'Extreme Edition' models (discussed in PC Notes February 2004).

A larger cache benefits any application that needs to repeatedly access lots of the same data — games, for instance, and some reverb plug-ins — but often makes little difference to the performance of mainstream applications. Nevertheless, a Prescott 3.8GHz P4 with 2MB cache is now scheduled for release in early 2005, and models with slower clock speeds should follow.

For years, major new designs of processor from both AMD and Intel were often accompanied by a reduction in the chip's core size and operating voltage, such that it could operate at lower temperatures and, ultimately, be persuaded to run at faster clock speeds. A higher clock speed always results in greater power dissipation, and with Intel's Prescott range the heat was almost too much to handle, mostly resulting in noisy systems — and, consequently, fewer sales than expected. I was fully expecting Intel to solve these initial problems and take the Prescott Pentium 4 range to significantly faster clock speeds, especially as they were speculating about clock speeds of 15 to 20GHz by 2010.

However, it now seems that multiple-core technology — the placing of two or more processor cores onto a single piece of silicon, either sharing common cache memory or each having its own — is the more likely long-term solution to greater computing power. It would be possible to use such a design in a CPU package identical to that used by existing processor models, with the same pin-out and footprint, relying on internal connections to distribute the power and signals to each core. Although a BIOS update would no doubt be required, this approach would meet with the approval of anyone wanting to upgrade an existing PC. Each of the cores would generally be under-clocked, compared with their single-processor equivalents, and would run at a lower voltage, so that while a pair would provide significantly faster performance than a standard processor (apparently up to 55 percent faster), they wouldn't run much hotter. We'll just have to wait and see what actually emerges.

AMD announced a new dual-core design way back in June 2004, and they aim to release it in mid-2005. Indeed, their original Opteron/Athlon 64 processors were designed from the ground up for multiple-core operation, but were only initially shipped with a single core. 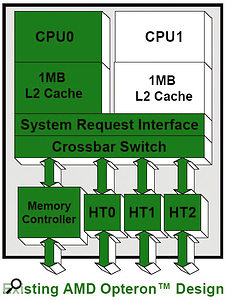 At the time, some industry analysts felt that this dual-core approach was an idea in search of a market, and that Intel's approach of ever-higher clock speeds was more likely to succeed. However, now that Intel have shifted attention towards dual cores, AMD find themselves ahead of the game, although Intel have already demonstrated a prototype dual-core Prescott chip running on a standard 915 chipset, and have a dual-core Pentium-M CPU on their road map. They also aim to release their first dual-core models to the public sometime in 2005.

One thing's for sure: the year ahead will be an interesting one for PC users, although perhaps a perplexing one for those thinking of buying a new machine. Let's just hope that audio software developers get to grips with dual-core processors quickly. A few of them still haven't solved their Hyperthreading problems yet!

I was impressed when I reviewed Emu's 1820M and 1212M PC-only soundcards in SOS June 2004, and the 0404 in SOS September 2004. This range has proved popular with musicians, and there's now a major free software upgrade available for download from www.emu.com. Since the upgrade contains not only new features but also driver options, it's well worth reporting in some detail.

The Power FX software upgrade (version 1.6) is compatible with the 1820M, 1820, 1212M and 0404 audio interfaces, and lets users access any of Emu's DSP effects as VST plug-ins from within almost any VST-compatible application. Just as with other DSP-powered cards, such as the Powercore or UAD1, the effects therefore impose no processor overhead, and can be used as inserts or send-return treatments as and when you please. Furthermore, the software includes some new effect algorithms, namely a new 'lite' reverb and seven new delays.

Confusingly, you need to download two update files (one for the drivers and the other for the Patchmix DSP utility), but after you install these, a single new Emu Power FX plug-in will appear in any VST-compatible host application, into which you can load any chained combination of the Emu DSP effects. Although this routing wizardry imposes a 512-sample delay, most applications can automatically compensate for that during playback, and the new approach is far easier to set up and use than the previous E-Wire plug-in, which allowed you to route audio to and from the Patchmix DSP mixer.

After installing version 1.6 on my 1820M I was pleased to find that the new reverb finally lets you create short room and ambience options not available previously from the Stereo Reverb algorithm, as well as using far less DSP power (you can run up to five of the 'lite' reverbs at once). In addition, the various echo algorithms allow you to choose the most appropriate delay time for your song (the longer the chosen delay algorithm, the more of Emu's DSP resources are used, leaving less to launch further effects). All the new effects are supplied with a set of factory presets to get you started. 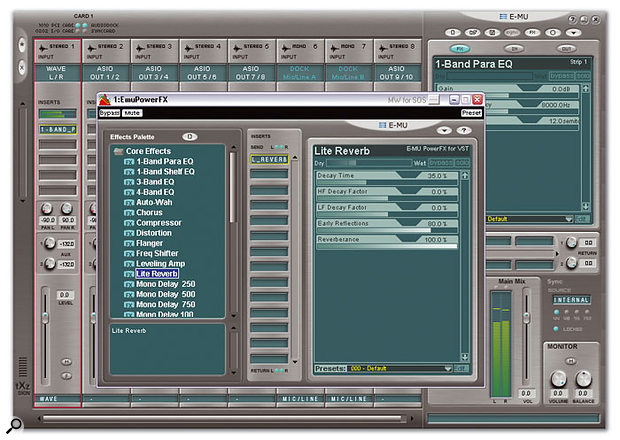 Here you can see the new Emu Power FX window superimposed on the Patchmix DSP utility, both kitted out in an optional third-party tXz 'skin'.

Other improvements include support for dual monitors and mouse-wheel support in the Patchmix DSP mixer, plus a new 'bypass all inserts' function, as well as various bug-fixes that cure ASIO problems with Wavelab 5.0, audio stuttering with Sonar 2.2 and 3.0, and 24-bit recording freezes with Sound Forge. However, for many people the highlight will be that the WDM drivers finally support 96kHz and 192kHz sample rates (the fact that they previously didn't was one of the 'cons' in my original 1820M review), although these still offer only stereo capability. You still have to use the ASIO drivers for multitrack purposes.

Emu had thoughtfully provided new RMAA (Rightmark Audio Analyser) presets for both 96kHz and 192kHz, in line with the new WDM driver support at these sample rates, so I could finally get some test results. The background noise levels proved to be an excellent 118dBA at both 96kHz and 192kHz, exactly the same as at 44.1kHz. In fact, this similarity tipped me off about the next result, for frequency response, which — as I half expected — wasn't significantly extended beyond the figure achieved at the 44.1kHz sample rate.

A few users have complained that the 44.1kHz response for both the 1820M and 1212M interfaces (but not the cheaper 0404 model) droops slightly above approximately 5kHz to about -0.5dB at 20kHz, before dropping like a stone as the anti-aliasing filters kick in, although personally I doubt that there are more than a handful of golden-eared folk who would hear this slight droop. I found exactly the same droop at both the 96kHz and 192kHz sample rates, but this time the response for both extended only slightly to -1dB at 32kHz. This is certainly an improvement over that for the 44.1kHz sample rate (-1dB at 21kHz), but it isn't ideal for capturing transients and high-end detail — which is, after all, one of the main reasons why some musicians choose higher sample rates. As a comparison, M Audio's FireWire 1814 is only -1dB down at 60kHz with a 192kHz sample rate, while ESI Pro's Julia extends even further, to nearly 90kHz at the same sample rate. Nevertheless, along with many other people, I still rate the audio quality of the 1820M and 1212M very highly overall.

Rightmark's famous Audio Analyser utility is now up to version 5.4. A new intermodulation distortion test option has been added to help spot problems specific to those soundcards that use internal sample-rate conversion. In addition, an auto-normalise function has been added, to prevent unscrupulous people running the dynamic range measurements at the bottom of the acceptable input-level range, to artificially boost the results. In acoustic mode (for testing loudspeakers, room responses, and the like) you can now separately measure second- and third-harmonic distortion, and there's a new THD-versus-frequency test.

I regularly use this utility in my SOS audio interface reviews, and anyone who wants to examine the performance of their audio interface should download it immediately, from http://audio.rightmark.org.

I've never experienced any operational problems with my 1820M, and had no problems with the new version 1.6 drivers or when using the new Emu Power FX in Cubase and Wavelab, apart from a couple of initial rogue error messages on first opening the Power FX window inside Wavelab. Other users have reported that the new effects drop in and out on some systems. Emu do provide a new 'Extra Buffers' preference for the new window, in case the aforementioned occurs (this option should be used with Fruity Loops, for instance). Since DSP effects are always processed in real time, a Render mode preference lets you force real-time calculations when rendering these effects permanently into an audio file in applications such as Wavelab and Sound Forge, that would otherwise process them as fast as your CPU can manage. Emu also include a new Power FX compatibility chart in the updated user's manual that details a few other problems with applications including Sound Forge 7, Adobe Audition 1.5, and Ableton Live 3.5.

Although the majority of Emu soundcard users running another DSP audio card alongside their Emu one experience no problems, a few UAD1 users have reported glitching that occasionally gets so bad that it sounds like continuous distortion. Some seem to have cured this problem by tweaking the PCI Latency timings, using a utility such as Mark Knutson's Double Dawg (which was covered in PC Notes October 2004). A BIOS setting of 64 or higher is recommended by Emu. A couple of users have even resorted to using the ASIO Multimedia drivers instead of the proper ASIO ones, to cure the problem. Emu are actively trying to track down the (obviously obscure) cause of it.

Despite the above, this update does contain welcome improvements and I suspect most users should install it for its driver improvements and bug fixes. However, some should probably avoid accessing the Power FX after the update, until various teething troubles are sorted out.