This month's action-packed PC Notes gives advice on preserving your lovingly crafted presets when you upgrade audio software, offers ideas on keeping your dongles safe and brings you the usual haul of handy hints and tips.

Like it or lump it, musicians must now be almost resigned to having dongle protection for one or more of their music applications. In last month's PC Notes, I offered advice about possible technical and driver issues, but some musicians suffer from a much more fundamental problem with dongles: losing them, or having them damaged or stolen. 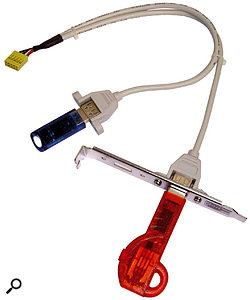 For the ultimate in dongle security, remove the backplate from a USB port-to-header adaptor, as shown here, plug the header end into a spare USB port pair on your motherboard, then firmly attach the cable/dongle assembly somewhere inside your PC with cable ties.

I've heard stories about schools and colleges losing dozens of dongles through pilfering and then finding, to their horror, that they have to fork out for the cost of the entire software application all over again: while the dongle itself is cheap to buy, the license it holds is unique to each owner, and irreplaceable.

Plugged into a USB port on the front panel of your PC, dongles are prone to being accidentally broken off and are easy targets for thieves (this may be a particular issue for schools and commercial studios). Plugging them into a rear-panel port is slightly safer, but can be fiddly when your PC is mounted under a desk, and again the dongles may get pushed up against a wall and damaged.

One cheap solution to this problem is to buy a 'dongle extender' cable, so that your dongle can dangle safely. For instance, iLok sell one on their web site (www.iLok.com) for $5.95. For several years I've been using a tiny four-port USB hub costing about £10, plugged into a rear-panel USB port, to house all my dongles, so that they sit in relative safety on top of my PC, but this provides even less security if your PC is exposed to the public.

The safest solution for PC desktop machines is to mount the dongles inside the case. Many modern motherboards support up to four pairs of USB 2.0 ports, but you rarely find more than two pairs of ports on their rear panels. You can add more by plugging a short USB-to-header cable directly into the motherboard, with the USB ports mounted on a dummy backplate. Such expanders can be bought from most PC component suppliers in two-port or four-port varieties for under £5 (in the UK, Maplin stock them, for instance), and they can also be used as internal dongle mountings.

Just unbolt the backplate, plug the header into a suitable USB socket on your motherboard and the dongles at the other end of the cable (see photograph), and then make the assembly secure inside the case with a cable tie or self-adhesive pad. Now no-one can remove your dongles without opening up the PC, which can in turn be protected by a couple of security lockable case screws. Kustom PCs, for example, have a security-lock kit (www.kustompcs.co.uk/acatalog/info_5499.html) for £8.50 that includes eight security-lock screws and two keys for removing them.

Those who prefer a ready-made equivalent to the DIY method above may be interested in the forthcoming Donglesafe range from Design Notes (www.designnotes.co.uk). Donglesafe will be available in Solo and Quad configurations, for securing one or four dongles inside your PC (or Mac), but I suspect that studios and educational establishments will be particularly interested in the 'King Quad' version. This is an external and secure steel box that can be bolted to desks and provides four dedicated dongle ports for each of four workstations, plus three assignable ones that you can switch between the four computers. Up to seven dongles could thus be simultaneously connected to a single workstation (most developers are happy for users to install their applications on several machines, since the dongle only allows them to use one at a time). Such measures should prevent all but the most determined thieves making off with your dongle collection!

The Rime Of The Ancient Floppy

Many thanks to SOS reader François Rossi for alerting me to an extremely useful PC utility hiding amongst the BBC and Master Computer Public Domain Library hosted by Sherlock Consulting Ltd. Omniflop runs on Windows NT, 2000 and XP. It was created to read ancient floppy disks in a variety of formats, so that you can access the data on them and copy it elsewhere.

The reason for his enthusiasm is that amongst Omniflop 's list of 89 features are floppy read/write/format options for five Akai sampler formats, two for Roland, three for Emu and 10 for Ensoniq, making it ideal for rescuing ancient samples from oblivion. Other useful formats for musicians include Peavey SP and Prophet 2002, plus several for Korg keyboards. Omniflop can write the captured data to another floppy or save it on your PC as an image file, although you'll need another utility to access the individual files, as these tend to use exotic filing systems. A list of suitable utilities is given on the web site.

François also points out that Omniflop is particularly useful for those running Atari ST applications on their PCs courtesy of Steem (the Atari STe emulator) that you can download from http://steem.atari.st/, because its floppy-reader utility isn't compatible with Windows XP. Find Omniflop at www.shlock.co.uk/Utils/OmniFlop/OmniFlop.htm

This month, I upgraded my copy of Steinberg's Wavelab audio-editing software to the latest version (v6), and I took great care to preserve all the presets I'd created over the last couple of years, so that I wouldn't have to start all over again. Things like floating toolbar positions don't take long to re-jig, but I do a lot of work with Wavelab and have organised my Master Section plug-ins into folders devoted to Tools, Dynamics, Enhancers, EQ, Reverb, Spatial, Special FX, Spectral Shift and Time Shift, so that I can quickly load the exact plug-in I need at any time. I have also created master-section preset chains for mastering and other tasks, a collection of presets for the spectrum analyser, and so on.

I'm sure you get the idea, and I'm sure many of you have similar collections of presets that you'd rather not lose. So what's the easiest way to do this? Well, the procedure varies to some extent from application to application, but here's what I do in nearly every case. Before updating, I open up the application's folder in the program files and view the contents ordered by date (select the Details view, and then click on the 'Date Modified' column). Now you can generally see which files were installed with the application (they all tend to have the same elderly date, or are at least some months old), and the often smaller files that you've subsequently altered, which therefore have more recent dates. Many applications also make life easier for you by creating separate Presets folders, and if you find any of these, the easiest approach is to copy them in their entirety to another hard drive partition, another drive, or a CD-R disk. Now you'll have them safe even if you install a new hard drive or upgrade to a new PC.

Once you have your presets safely stored for posterity, you can upgrade your application. Some installers suggest you choose a new application folder name, so that the previous application version remains intact and can still be launched, but apart from the unlikely possibility of you not being able to load older songs/files into the new version, I generally don't see much point in keeping the old application version — it wastes space and is rarely, if ever, going to be used again.

Other installers offer to place the new version 'over the top' of the previous one, and may also offer to create a backup folder of all updated files, so that you can 'roll back' to the previous version if any problems arise. This can work well, and with intelligent installers the presets from your previous version may remain intact during the process and be immediately available for use with the new version. It still makes sense to have safety copies elsewhere, though, as previously described, just in case something goes wrong.

The third alternative is to uninstall the previous version before installing the newer one, and this is generally what I do for the cleanest and safest results. You can then paste your previous settings and presets into the appropriate folders afterwards. For the ultimate safety net, image your Windows partition first, using a utility such as Drive Image or Norton's Ghost, so that you can backtrack in the (hopefully unlikely) event that you ever need the previous version again.You might think that installing the new version in a different folder, checking that it works and then uninstalling the previous version afterwards would be the safest approach, but if there are any shared system files or common Registry entries used by both applications, uninstalling one of them may result in problems for the other, unless you're really careful. Overall, I find the 'save presets/uninstall the old/clean install of the new' approach is best for me. It may require a little care, but need take no more than five or 10 extra minutes of your time, compared to the hours that would be needed to recreate all your favourite settings. I think it's well worth the effort, but here's a plea to software developers: why not provide an install option that prompts: 'Previous version found — back up all user settings before installing new version?'. You'd be very popular if you did!

ESI Pro have announced the first PCI Express interface in their Maxio series. Like its PCI forebear, the XD Xpress card supports up to 32 simultaneous inputs and outputs at up to 192kHz.MOTU PCI Express Support: MOTU have started shipping their PCIe-424 card for both Macs and PCs, available for purchase as part of a 2408 Mk3, HD192 or 24 I/O core system. The PCIe-424 card can apparently be installed in any PCI Express slot, regardless of the number of 'lanes'. Existing owners of PCI-324 or PCI-424 cards can upgrade to the PCIe model, either on-line or by telephone from their UK distributors Musictrack. The price is £199 including VAT.

Late Vista: Microsoft have announced that their long-awaited 64-bit Vista operating system will be ready for some businesses, as previously promised, by the end of 2006, but consumers and those wanting a new PC with Vista pre-installed will have to wait until early 2007.

Digital Musician Net: The DMN VST plug-in first demonstrated at last year's Frankfurt Musikmesse is now up to version 1.5, which now makes it even easier for musicians to collaborate live via a broadband Internet connection with both audio and video communication. New features include an integral chat function for those who prefer simple text to a mic and video-camera link, a User Profile button that lets you find out more about your session partners by linking directly to their 'Artists & Studios' home page, and a Live Input function that automatically compensates for the input latency of live instruments, so that you hear everything in sync during the recording process.