If you ever have to re-install all your software after a PC upgrade, there are tricks that can save you a lot of time, and also help you to be more organised in the future. PC Notes rounds them up, as well as keeping you up to date on Vista compatibility for musicians.

Regular readers will know that I've recently built myself a new dual-core PC based around an Intel Conroe processor. I discussed my hardware choices in PC Musician February 2007, and followed up in March 2007 by covering the issues musicians need to be aware of when installing Windows. To complete the trilogy, here's a batch of hints and tips that should save you quite a bit of time whenever you have to re-install all your software. We all have to do this periodically and it can be a nightmare without a little preparation.

If you're upgrading to larger-capacity hard drives to hold sample data, don't bother re-installing all your sample libraries from scratch. You can instead temporarily connect the new drive to your old PC and copy the data across from the old drive to the new with a single click-and-drag. This may still take several hours, but the transfer rate will be considerably faster than that of any CD/DVD drive, and you can go off and do something else in the meantime, which certainly beats feeding in the original CD-ROMs and DVD-ROMs by hand all over again.

All you need to do is remove the side panel of your PC case and plug suitable power and data cables into the new drive, even by temporarily disconnecting one of your existing drives and using its cables. The new drive doesn't need to be bolted in either, and can simply be balanced on a box or something of suitable height outside the case. Once you've booted into Windows and the new drive has been detected, just use Windows Explorer to drag your entire sample collection across to it — or audio projects, synth libraries and any other data, for that matter. Applications must, of course, be re-installed manually once the drive has been installed in your new PC, so that all the correct entries go into the new Windows Registry. 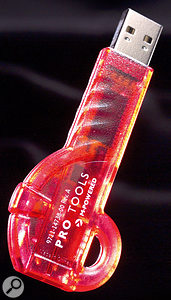 If you already use an iLok (this one was supplied with Pro Tools), why not see if any other music software in your collection can be iLok authorised? One iLok can hold up to 100 authorisations, and you will never again have to wait for a challenge/response when moving to a new PC.

Presets can take many hours to create, so don't leave them behind on the old PC: always make image files of the Windows partitions of your old PC, using a suitable utility such as Norton Ghost or Acronis True Image, so that if you have forgotten to back up any personal data (and there's always at least one plug-in or soft synth that stores its presets in an obscure folder) you can later extract the appropriate file from the image and copy it to your new hard drive.

You'll probably recognise most of your own user presets because of the file names you used to save them, and you can nearly always copy them across into the same folder on the new PC, where they should be immediately recognised by the application that created them. However, it's also worth visiting specific product forums, where you can often pick up less obvious time-saving tips. For instance, I've spent a long time organising my Wavelab plug-ins into folders such as Compression, EQ, Reverb, and so on, and I found I could avoid doing all this again by copying a file called PlugInPrefAE.set file from my previous install to the same Wavelab/Presets/Plugins folder on my new machine.

As you're making a fresh start, now's the ideal time to check on developers' web sites to see if there are any free updates available, so you can download and install the very latest versions of your applications. I used the opportunity to upgrade my Firefox browser from version 1.5 to 2.0 (www.firefox-2-0.com), and my Open Office application to version 2.1 (www.openoffice.org), as well as downloading various plug-in upgrades.

Always create a separate Updates partition to store these files, so you can easily find them again in the future if needed (this is especially true now that some updates can be 100MB in size!). I've done this for every software application I've installed over the years, so I was able to copy my entire Updates partition to the new hard drive, as described above, which saved quite a few hours of downloading updates all over again.

This month I suffered an annoying problem with an unusual cause. If you ever come across something similar my experience may give you a head start in solving it.

I'd installed Intel's Desktop Utilities for my new motherboard, primarily to monitor the CPU and motherboard temperatures while altering fan settings. After working fine for several weeks, the utilities suddenly stopped launching properly and instead popped up an error message reading 'Service program is not active', although I wasn't aware of having disabled any Service that they used. Even reinstalling them wouldn't resolve the issue, yet the same utilities still worked fine on my other Windows partitions.

A search on the Internet for this error text showed that a lot of other people were suffering from exactly the same problem, but no-one seemed to have a solution. Fortunately, I eventually traced the problem to my Firewall software. As soon as I allowed the IDU permission to be in its 'Trusted Zone', which generally allows other computers in a LAN (Local Area Network) to share resources such as files and printers, it started working perfectly again, presumably because giving any software application low-level access to motherboard devices is (sensibly) regarded as a security risk. So if you ever find low-level utilities inexplicably refusing to run, take a closer look at your Firewall settings.

If some of your plug-ins or soft synths use challenge/response protection, make sure you also copy and paste both challenge and response into a global text file on the same partition, in case you need them again on any new PC, along with any serial numbers and other information required. This approach provides another benefit: you can discard all the original packaging and put all your discs into a CD wallet. I also put the version numbers for each software item into the same text file, which has saved no end of time when I visit developers' web sites and can't remember what version I'm currently running.

If you have an iLok dongle for some of your plug-ins, be aware that lots more developers are now offering an iLok authorisation as an alternative to challenge/response. I took the opportunity to switch to this protection method for my PSP and Izotope plug-in ranges, because once the authorisation is sitting in the dongle it will be there for ever, even if you upgrade to a new PC, so you'll hopefully never need to go through the authorisation process again. 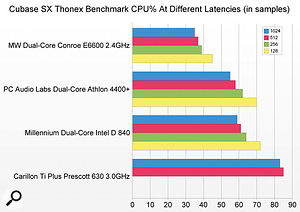 Across a range of different PCs, the Conroe beats Intel's previous dual-core D-series and AMD's Athlon X2 dual-core by a comfortable margin in the punishing Thonex benchmark. 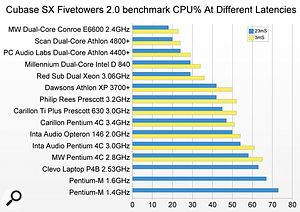 Although not challenging enough to test today's powerful PCs, the Fivetowers 2 test nevertheless still demonstrates how far processors have come in the last few years, revealing that my new Conroe 2.4GHz PC is more than three times the speed of my previous P4 2.8GHz model.For those who have been waiting to find out how well my new Conroe E6600 dual-core PC performs with music software, as promised last month, I've included two screenshots, showing the traditional Fivetowers 2 results running under Cubase SX 3.1, and the more punishing Thonex benchmark. I've also run the Blofelds DSP40 (DAW Bench) tests, and managed 80 simultaneous Magnetos with a 1024-sample (23ms latency) setting. As you can see from the Fivetowers results, my new PC is not only faster than any other machine I've had in for review to date, but also more than three times as fast as my previous Pentium 4 2.8GHz computer. Progress indeed!

Anyone buying or building a new PC at the moment is bound to be wondering whether to install Vista or stick with Windows XP. With this in mind, I'm happy to report that more audio manufacturers and developers are now getting behind Vista and releasing new interface drivers, announcing compatibility details for their existing software, or releasing new versions of their software that are Vista compatible. After all, without suitable drivers our hardware can't be used at all under Vista, while without compatibility information we are unpaid Beta testers, having to find out the hard way whether or not a particular application will run reliably, or indeed at all.

On the hardware front, Lynx Studio Technology (www.lynxstudio.com) have released 32-bit and 64-bit versions of drivers for their Lynx Two, L22 and AES16 PCI cards, as well as announcing their first PCI Express product, the AES16e (with essentially the same feature set as their previous AES16 PCI version). RME (www.rme-audio.com) have also announced new HDSPe cards and HDSPe MADI cards, both in PCI Express format and with Windows Vista drivers, while MOTU (www.motu.com) have announced that they are shipping 32-bit and 64-bit Vista-compatible drivers for all their Firewire, PCI and USB audio interfaces.

Meanwhile, Emu (www.emu.com) have announced a new Emulator X2 Platinum software sampler, in 32-bit and 64-bit Vista-compatible versions. However, for me the most exciting news is that once again Cakewalk (www.cakewalk.com) are ahead of the game, releasing the first major sequencer application that natively supports Vista in 32-bit and 64-bit modes.

Sonar 6.2 is a free update for existing users and takes advantage of new features in Vista such as WaveRT driver support for enhanced CPU performance at low-latency playback settings, and MMCSS (Multimedia Class Scheduler Service) support to give the Sonar audio engine prioritised access to CPU resources. On 64-bit PCs running Vista in 64-bit mode, Sonar 6.2 users will also experience benefits that include enhanced CPU performance and the ability to access up to 128GB of RAM. These are the sort of important Vista-related improvements we've all been waiting for!

For those about to embark on the big change-over, the other big question must be whether Vista is likely to run existing applications that have been deemed Vista-compatible at the same speed as Windows XP, faster because of the new Vista engine, or slower because of extra overheads for features such as the Aeroglass graphic interface.

Launching time for your favourite applications is certainly likely to be significantly faster, because Vista uses a new Superfetch feature that monitors your typical software usage and then pre-loads files that it expects will be required the next time you boot up your PC. It even memorises how often you launch them and when, so if you only have time to boot up your sequencer at the weekend you can expect it to know this and be prepared. Load times may be cut by more than half!

Once running, most existing 32-bit games and 3D benchmarks seem to end up performing a few per cent slower with Vista than under XP, although, on the other hand, some audio and video encoding algorithms run faster, occasionally by a significant margin. However, the OpenGL graphics library is not supported by Vista, so the performance of any professional graphic applications using it will plummet. Across a range of other software it's pretty hit and miss, with both gains and losses of a few percent in performance. One thing's for sure: anyone primarily buying Vista to make their software run faster is likely to be disappointed, although we may see more gains with future Vista-optimised 64-bit applications. Sonar users can be justified in feeling a little smug in this respect, while the rest of us will have to wait.