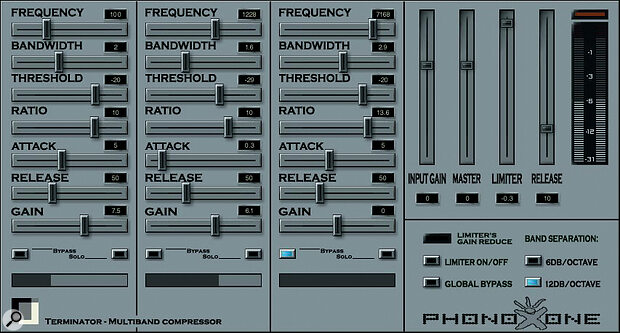 This month Martin Walker takes software samplers as his theme, offering advice about avoiding glitches when using them with other applications, and bringing news of a forthcoming sampling VST Instrument.

I still receive a steady trickle of emails from readers whose PCs are suffering from audio clicks and pops, but of course it's very difficult to track down the specific cause of each problem by remote control. However, I have covered their various causes several times in the past (most recently in 'Getting Going', SOS July 2000), and provided a suggested set of Windows and soundcard buffering tweaks to cure them.

The most annoying glitches are those that only happen occasionally, because this makes it far harder to track down their cause. The first obvious culprit is a background task that switches in periodically, and most of these are now fairly well documented — I've included a list in my PC FAQs section on the new SOS forum (https://web.archive.org/web/2015..." target="_blank). Other contenders include PCI (but not AGP) graphics cards whose drivers ignore queuing protocols, although most manufacturers have thankfully put a stop to that practice. This particular problem normally coincides with screen updates, making it easier to tie down, but in fact the PCI buss can also be momentarily blocked by other demands, such as those made by high‑speed SCSI cards.

Judging by the emails I'm receiving, some musicians have already tried the relevant cures and still suffer occasional clicks and pops. Well, this month my own PC suddenly started doing exactly the same thing — causing seemingly random clicks in audio recordings once every minute or two. It was particularly tedious because I could only listen for the clicks after the recording was finished! 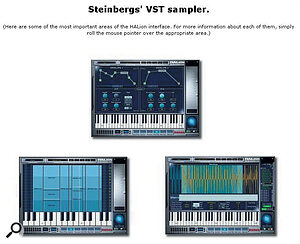 A sneak preview of Steinberg's HALion VST sampler from the Steinberg web site.

At first I suspected that the click was coming in via the mains supply, since I'd not had any such problems before. Using the 'Glitches' section of Wavelab's Global Analysis function I was able to automatically search for the clicks, which made it far easier to home in on them. As soon as I saw that sections of the waveforms were missing, I realised that this was a PC rather than a mains problem. Mains spikes can certainly give clicks with sharp rise times, but every one of these had a vertical edge, followed by a smooth continuation of the waveform — a sure sign of a momentary computer drop‑out.

I had recently replaced my audio hard drive, but the new one was significantly faster than the one it replaced anyway, so it didn't seem a likely culprit. As a matter of course, I ran Norton's SpeedDisk defragmenter, but given that the new drive could theoretically run dozens of simultaneous audio tracks I didn't expect this to cure the problem, and it didn't. I also already knew that there were no background utilities running that could tip my PC over the edge, and that there were no problems with my ATI Rage 128 graphics card, which is a model known to be suitable for this application.

Ironically, the cause proved easier to track down because it happened during such a lightweight task — the stereo audio recording of a MIDI‑only Cubase song. Because of this, I could largely discount hard drive problems, and with only a single stereo track involved, PCI buss traffic couldn't be the cause of the problem either. The only other new item being used was Nemesys' GigaStudio software sampler, but this hadn't previously caused me problems.

Unfortunately, the huge imponderable when running two such major applications as Cubase VST 5 and GigaStudio 160 side by side on one PC is that their peak CPU requirements may very occasionally coincide. Although neither were ever showing more than about 35 percent CPU overhead in my song, CPU meters only take a reading once every second or two, so such a reading will rarely, if ever, coincide with the instantaneous highest peak in demand. If the processor overhead ever rises beyond 70 or 80 percent there's a serious chance of a glitch somewhere. In extreme cases your sequencer will stop altogether.

What happens when one application suddenly requires more processing power is that the other one hasn't enough time to keep its audio buffers topped up. When I doubled the ASIO buffer size of my Gina card, taking the latency from its normally well‑behaved 13mS to 25mS, the number of random clicks in my eight‑minute track dropped from about a dozen to one, and when I raised it still further, to 50mS latency, I found there were no clicks at all. I could also have reduced the polyphony of GigaStudio a little, to the same end.

Coincidentally, I came across an FAQ on the same subject a week or so later, at the RME web site (www.rme‑audio.com). This also recommends that you use a high ASIO latency setting when running the Hammerfall or DIGI96‑series soundcards, to avoid clicks with both VST and GigaSampler/Studio. (By the way, the Giga application will still provide 6‑9mS real‑time latency, even though VST becomes rather more sluggish.)

All the above raises a worrying thought for those who use stand‑alone software synths alongside a MIDI + Audio sequencer on the same PC, and (to a lesser extent) even when running VST Instruments. If you set up your soundcard latency in the sequencer by reducing it until clicks are obvious, and then move it back up to the next setting, you might still get an occasional click when softsynth polyphony is high, or when there's lots of extra activity, such as automation, happening in some parts of a song. Since the chances of a very short CPU overload registering on the CPU meter are slim, you could miss such problems until it's too late. As you might expect, my next task was to check a song recorded the week before for glitches, and sure enough I discovered a single click that I simply hadn't noticed at the time, but which was still quite audible.

I would recommend that you do an automatic glitch check on a few of your songs, to see if you're sailing a bit too close to the wind with your latency setting. (This might just explain some of the rogue clicks that readers tell me about.) Sound Forge owners can use the 'Find' tool, while Cool Edit Pro users have a comprehensive Click/Pop/Crackle Eliminator in the Noise Reduction Transforms.

Glitch and click detection is a somewhat imperfect art, so don't be surprised if you get quite a few false alarms from perfectly legitimate changes in the waveform. What you're looking for is obviously missing sections of waveform where your buffers ran out of steam — the 'before' and 'after' parts will be joined by a vertical line where data is missing. You may need to experiment with the detection settings to narrow down the search. When checking my own songs, I found the best settings for the Wavelab Glitches search function were 46 for Threshold and 50 for Sensitivity. I also raised the setting for 'Maximum number of error points to report' to its highest.

The best course of action is always to remove the cause of glitches, but if you do find a few in existing recordings you can often remove them very neatly using either a dedicated plug‑in or a feature like Wavelab's Waveform Restorer, which provides a selection of algorithms for dealing with both short clicks and short missing sections of waveform.

Nemesys' GigaSampler and GigaStudio have the unique advantage of being able to stream samples of almost unlimited length direct from a hard drive, and for realistic acoustic instruments this approach can't be beaten. However, there's no denying that RAM‑based soft samplers can present fewer problems when you're running a MIDI + Audio sequencer on the same PC. Many musicians are already using applications of this type, such as Bitheadz' Unity DS1 and NI's Reaktor, for their sampling needs.

However, the ultimate solution for RAM‑based sampling is to directly integrate it into the MIDI + Audio application, totally avoiding any possible conflict of interests. Although Mac Logic users already have the excellent EXS24 soft sampler, this hasn't yet been released for the PC, and won't help VST users in any case. So I'm pleased to pass on the news that, after a month‑long teaser campaign on their web site, Steinberg have finally announced details of their HALion VST sampler, with a projected launch date sometime in the first quarter of 2001.

HALion provides 32‑bit support, sample&#150;accurate timing, and four types of 12dB or 24dB/octave filtering, with a 'fatness' parameter. It's 16‑part multitimbral and has 128 programs, but since the number of voices it offers isn't mentioned, I expect this to be solely dependent on processor power.

With a selection of different screens, including the drag‑and‑drop KeyZone Menu for easily creating multisampled instruments, the LoopEditor with its crossfade looping functions, the Modulation/Tune window to give samples life, and the Program window to keep them all organised, its user interface certainly looks attractive and would appear to be comprehensive. And, with the ability to import Akai samples and LM4 soft drum machine scripts, as well as WAV and AIFF files, it ought to do extremely well. I'll report back in more detail as soon as I can get my hands on the real thing.