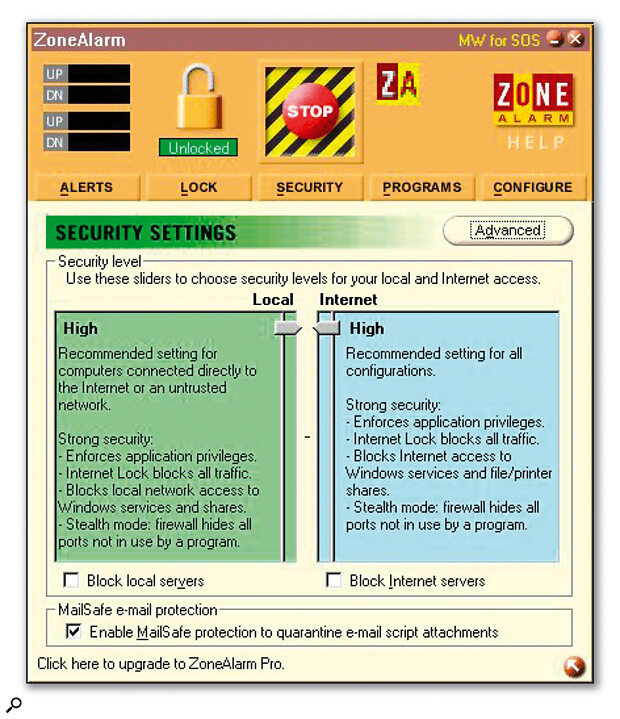 If you want your PC to be safe from prying eyes while logged onto the Internet, a personal firewall utility such as Zone Alarm is a must (see main text).

Most of us assume that only big businesses and financial institutions will fall victim to hackers, but the reality is that someone could be attempting to invade your personal computer right now. Martin Walker tries to make the world safer for PC users.

Last month I described how I've reconfigured my PC, firstly to make it more stable and robust, and also so that I could always return to a previous state if an application caused me serious problems. This month I thought I should follow up by investigating Internet Security.

For a new slant on plug‑in enhancement, have a listen to the virtual BBE Sonic Maximiser, courtesy of Virsonix and Cakewalk.

We've all heard the stories about high‑profile Internet hacking into government and company networks, but many people don't realise that the data on a personal computer can be just as much at risk during the time they're logged onto the Internet. Part of the problem is that Windows incorporates networking technology first introduced by IBM in 1985 — well before the Internet took off. Its file and print sharing facilities are designed so that data can be shared by all computers connected to a Local Area Network (LAN). These capabilities make the lives of many people much easier, but if you're on‑line to the world they also mean that anyone in the world can (theoretically) access the data on your PC.

By the way, this type of hacking is completely different from a virus attack. In the case of the latter, a small piece of damaging code is embedded in a downloaded file and activated when you later run the application in question, or perhaps arrives via email. In contrast, hacking is possible if your PC isn't secure while logged onto the Internet, when it can be interrogated in real time, and your files tampered with, deleted, or even uploaded by someone else for subsequent worldwide distribution. Even if you password‑protect your machine (and, like most musicians, I don't bother on my studio PC), password‑cracking utilities are available.

Admittedly, the risks are fairly low if you are only connected to the web for a short time, to collect and send email, browse a few forums, and download the odd driver. This is because your Internet Protocol (IP) address that uniquely identifies your computer will be different every time you log onto the net using a telephone line, so your PC can only be invaded during the time you're on‑line.

However, if you have a permanent connection, such as a cable modem or DSL line, and your PC is left on‑line for hours at a time, the risks are somewhat greater. In this situation your IP address is fixed, and once hackers have penetrated your defences they can return at any time to wreak more havoc. Freeware Internet 'scanner' utilities are available that can run 24 hours a day, searching for on‑line machines and then collecting data about them. Some claim to be able to scan an entire country (albeit a small one) during a single night!

Fortunately, you can take precautions to stop malicious individuals gaining access to your PC, and it needn't be expensive. Firstly, if you don't need to share files across the Internet, it's possible to disable this function from within Windows (see the grc.com/su‑fixit.htm page of the excellent Gibson Research Corporation site for details). These measures should make your PC data secure from most attacks, but will prevent you from using your PC with remote‑access utilities such as PC AnyWhere or Laplink.

To provide more security and still leave you with the option of using the type of utilities mentioned above, you need a 'Personal Firewall' utility. As its name suggests, this software creates an impenetrable barrier that isolates your PC from the Internet, by inspecting each packet of data either arriving from the Internet (incoming), or being sent from your machine (outgoing).

Incoming data is examined before it reaches any other software in your PC, and can be blocked if deemed necessary. This action will prevent unauthorised access to your machine, other than the normal reading of web pages and the benign use of cookies. The latter are not only harmless but can be extremely useful — for instance, the one placed on your PC by the SOS forum remembers when you last logged off, so that you can subsequently choose to view only messages posted since your previous visit.

Outgoing data, obviously, is sent by your Internet software and browser, and these will need to be specifically authorised to do so — along, perhaps, with utilities such as Download Accelerator Plus, which I recommended back in the May 2000 PC Notes column. You might think that only checks on incoming data would be important, but, as many PC owners have already found, even Microsoft's Notepad can be doctored and made to sneak off and 'phone home' while you're innocently browsing the Net. Programs that do this kind of thing are known as 'Trojan Horse' programs.

Having done my homework on Internet security, I began to realise that a Personal Firewall was essential to the long‑term security of my data, and I started looking for a suitable utility for my PC. (For a well‑researched review of Personal Firewall utilities, visit grc.com/lt/ scoreboard.htm.) I fully expected and was quite prepared to pay £20 or so for a commercial product, but was surprised to find that one of the most respected ones, with a range of excellent reviews from various well‑respected PC magazines, is a free download for personal and non‑profit use, and costs only $19.95 to register for business users.

Zone Alarm, from Zone Labs, runs with Windows 9x, NT, 2000, or ME, and is a 2.8Mb download from www.zonelabs.com" target="_blank. It's easy to install and use, and although it defaults to being automatically loaded at startup, my preference is to run it 'on demand', just before I log onto the Net. Separate Security settings sliders are provided for the 'Local' zone (so that you can continue to share files and printers with other computers connected to a local network) and the 'Internet' zone, where the settings should usually be 'High', so that no other machine or web site can share files with your PC. Single‑PC home users can just set both sliders to 'High'.

The first time you run Zone Alarm, you'll need to agree to let your default browser have access to the Internet, and whenever another one of your applications (perhaps an audio‑streaming utility or program updater) subsequently tries to gain access, you have to specifically decide whether or not to allow this. If any unauthorised activity is detected, an alert pop‑up window appears, to warn you, and all such activity is logged in a text file. Zone Alarm can also quarantine various email attachments to stop them from running, although it isn't a virus checker. You can also optionally Lock all inbound or outbound Internet activity, either on demand, or after a set period of inactivity (useful if you wander off while your PC is still on‑line).

After installing Zone Alarm, I ran the tests on the Shields Up! web site (not connected in any way with Zone Labs), and this confirmed that my PC was now far less vulnerable to attack from outside or inside. I haven't noticed any reduction in Internet performance either, despite the fact that every packet of data is now being intercepted and checked on the way in or out.

I normally spend two or three hours a day on the Net, ferreting out information for my SOS features, often leaving my PC online for long periods as I write about what I've found while it's still fresh in my mind. In just its first 24 hours of use, Zone Alarm flashed up at least half a dozen warnings about attempted incoming requests to connect to my PC. Some happened as soon as I visited specific web sites, and others totally without warning. Although some were legitimate ones from my ISP, it was a sobering experience, and one that webmasters the world over have known about for years, but most individuals still don't realise what goes on under their noses. I feel a lot safer with Zone Alarm installed.

Incidentally, Zone Labs have a KnowledgeBase section on their web site, where you can click on the 'More' button if an Alert pops up on your PC, to link to their AlertAnalyzer page for more information about the attempted probe. You may even be able to ascertain the source of the probe.

Following the catalogue of computer disasters that I detailed in the June 2001 SOS, several readers got in touch to offer helpful advice. Adrian Purkiss passed on details of a utility that claims to remove all trace of Microsoft's Office 97 suite — you run it after the normal Windows uninstall procedure. As I explained last month, I've already taken the more drastic step of installing new versions of Windows on freshly formatted partitions, but if anyone else finds themselves in a similar situation the URL for the utility is download.microsoft.com/download/office97std/Utility/4.0/WIN98MeXP /EN‑US/Eraser97.exe.

James Marchant offered me a review copy of the Farstone Virtual Back software that his company Counterpoint (www.counterpoint‑mtc.co.uk" target="_blank) distribute to schools and colleges. It's perfect for such customers, since it runs in the background and monitors all hard‑drive activity, making backups of any file that gets altered. If a student manages to crash the system, whether by accident or maliciously, those in charge can simply restore it, from a choice of up to 31 Restore Points taken at different dates.

Unfortunately, all this background activity does have a performance implication for the PC, so I doubt that many individual musicians will consider it. However, given the added protection, it's well worth considering in many scenarios. Visit www.farstone.com" target="_blank for more details.

• Those who read my PC Mastering feature in SOS June 2001 will no doubt be pleased to hear that, in partnership with BBE, Cakewalk have just released a DirectX plug‑in version of the famous BBE Sonic Maximiser. Like most other enhancers, its aim is to produce more detail and focus at both low and high frequencies, as well as greater separation between instruments in the mix. However, BBE's process doesn't generate extra harmonics — instead it uses a rather different frequency‑selective phase shifting approach. The plug‑in sounds good (although it's easy to overdo the effect) and you can buy it direct from the Cakewalk web site for $129 ($99 for registered Cakewalk customers).

Philippe Goutier, the author of Wavelab, has released a version 3.04c update for the program. This has new Pentium 4 optimisations, updated CD‑R drivers, and a slew of minor bug fixes, along with support for the forthcoming HALion sampler and a readout of plug‑in filenames during launch, to help track down badly‑written ones that may halt the program.