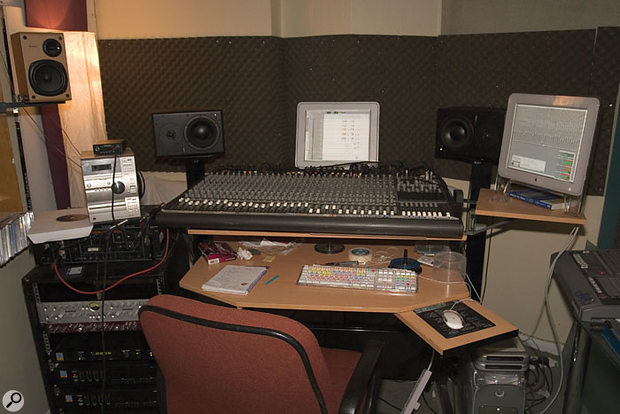 The SOS team get busy at the London studio of a band called South, by transforming the sound of their troublesome monitoring room. 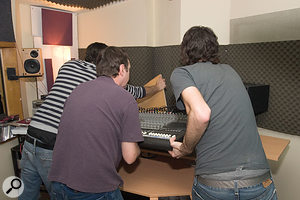 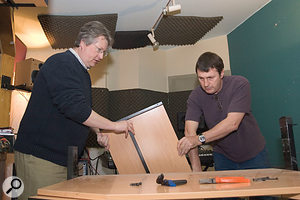 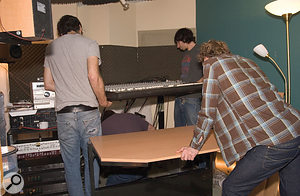 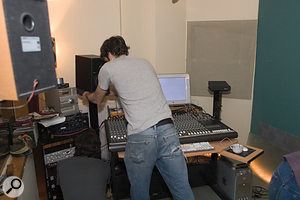 Here you can see how the main workstation desk was improved. Initially the mixer was on a higher shelf, which made it more difficult to use, interfered with the sound from the monitors, and meant that the two computer screens had to be separated (main photo). The first step towards a better layout was to lift the mixer from the desk so that the top shelf could be removed. The redundant shelf supports were then sawn down, allowing the mixer to be reinstated on the main desk surface. Finally, the monitors were replaced, but vertically to provide a wider monitoring sweet spot, and the two computer screens were placed side by side on a stand behind the mixer. 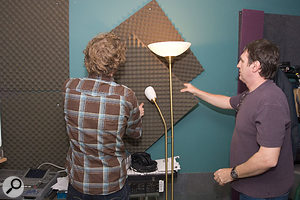 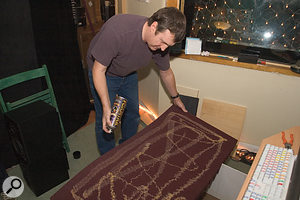 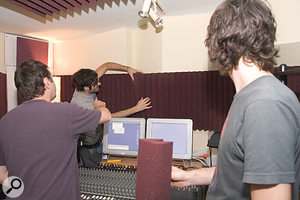 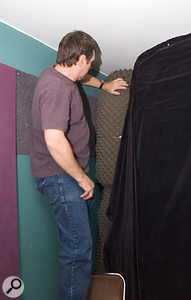 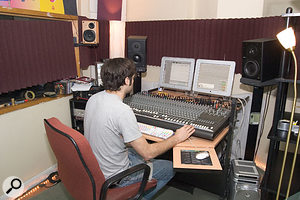 Transforming the control room's acoustics required a number of different steps (top to bottom). The band had already installed some thin acoustic foam tiles, but these weren't placed effectively, so they were removed. Thick Auralex acoustic panels were then glued in a horseshoe shape on the walls behind the monitors, as well as to the ceiling, in order to reduce direct early reflections reaching the listening position. The previous thin tiles were rolled up and packed into a corner of the room as improvised bass trapping. With the acoustic treatment done, listening tests allowed the tonal balance of the speaker system to be optimised with the frequency contour controls.This month's Studio SOS visit comes from an industrial building in London, where the band South have set up their own studio. The band comprise Joel Cadbury (vocals, bass, guitar, synths), Jamie McDonald (vocals, guitars), and Brett Shaw (drums, keyboards), and they have enjoyed a certain amount of commercial success since releasing their first album From Here On In on the Mo Wax label back in 2001. Their second record, With The Tides, was released by Sanctuary in 2003, and they are now working on their third album, which should arrive in the shops in March 2006. They're doing all their recording in their own studio, and will have mixed eight of the tracks from their new album there, including two with producer Dave Eringa. (Dave is also mixing two of their tracks at Brit Row studios.)

The rooms had already been treated with some thin acoustic foam tiles Joel had bought on eBay, and these had been positioned mainly on the front and right walls of the new control room, with a few on the ceiling. The left wall was mainly taken up by the control-room window. The rear of the room featured the semicircular shell of a spiral staircase intruding into the room so, quite sensibly, they'd covered this convex surface with a duvet and some heavy drapes to cut down on reflections.

A narrow space to one side of the stairwell structure accommodated a set of free-standing shelves, while the entrance door was at the other side. The front stud wall of the room was also angled in several segments, presumably to help control reflections when it was used as a studio. With their Dynaudio BM6A speakers facing down the longer axis of the 12 x 8.5-foot room, the symmetry was also thrown out a little by the ceiling, which was sloping from left to right rather than from front to back as would have been preferable.

It was immediately obvious to us that the monitoring balance was inconsistent at different points around the room, and we also noticed that the band's Mackie eight-buss console was set up on a very high desk, barely a couple of inches below the monitors, which were on their sides on stands.

This arrangement produced very strong early reflections from the console, while the sideways monitor mounting narrowed the sweet spot. It also caused ergonomics problems, because one computer screen was in front of the mixing position, but another was mounted on a shelf fixed to the desk quite a long way off to the right.

The existing foam treatment was put up asymmetrically and it wasn't really doing the monitoring environment any favours, so we removed it all except for a couple of panels above the console. We then moved the mixer onto a keyboard stand, so that we could extricate the supporting desk and modify it.

With the upper shelf of the desk removed, we could drop the lower shelf to a sensible height for the mixer, the only problem being that the mixer wouldn't fit between the two rather substantial metal upright shelf supports. Not to be thwarted, the band hacksawed the right-hand support to size! With the support gone, the mixer could be set up on the desk at a more practical height. A keyboard stand from the studio was then placed directly behind the desk, supporting the redundant upper desk shelf so that the two Apple monitors could sit side by side on it.

With the speaker stands now a little further forward and angled inwards, we moved the speakers to a vertical position and used a couple of Auralex Mo Pads to angle the speakers towards a spot just behind the head of anyone working in the mixing chair.

One of the monitors had a damaged high-frequency trimmer, so we removed the amplifier assembly to see if this was fixable. Unfortunately, the plastic adjustment spindle had been snapped clean off the potentiometer inside the case, so there was nothing we could do other than show Joel how to fit a replacement later, once he could get one.

With all the cheapo foam taken down, the room was of course rather reflective, so we used four-inch Auralex foam panels to form a horseshoe shape extending behind the monitors and out to a little way behind the mixing position. (Paul Eastwood of Audio Agency arranged to get this shipped directly to the studio at very short notice in time for our visit, so thanks for that Paul!) A loose Auralex panel was also placed over the control-room window, supported with string from small cup hooks screwed into the window frame so that it could be removed when sight lines were required during recording.

In all, we used five panels to treat the walls, leaving us one spare to put on the ceiling centred just forward of the mixing seat.

These measures audibly improved the sound, but did little to resolve the problems in the bass region, so we decided to improvise some bass trapping by rolling all the old foam we had removed into cylinders, secured with tape, filling the area between the stairwell and the side wall to a depth of two or three feet.

Hugh produced his familiar BBC test CD and we used it to balance the levels of the two speakers. We also checked that the undamaged speaker had the same subjective high-frequency level as the damaged one by switching to mono and listening for a stable central image on cymbals and vocal sibilance. Joel had turned down the bass trimmers in an effort to control the room-mode problems, but we now found that these were best set to their flat positions.

As expected, the stereo imaging was greatly improved now that the new foam was in place. However, what we hadn't quite expected was quite how dramatic the improvement in bass-end evenness turned out to be, presumably as a result of our improvised bass trap, assisted by the convex shape of the back wall.

With most small rooms we've worked on, there's still been a dip in bass at the absolute centre of the room and there have also been hot spots near the walls and corners. Here, though, the bass seemed more or less even everywhere in the room, except very close to the walls and corners, where the boundary effect inevitably increased bass levels. Complex bass parts on the test CD showed up no unduly loud or quiet notes, and the overall tonality and imaging of the monitoring setup was as good as we could have hoped for, with a very wide sweet spot.

But, most importantly, all three members of the band were impressed by the improvement in monitoring accuracy and also approved of the more streamlined appearance of the mixing area.