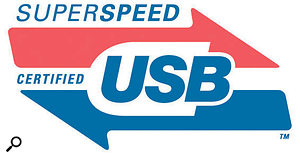 With real‑world transfer rates reaching 400MB per second, SuperSpeed USB 3 could become the most popular standard for external hard drives and audio interfaces.

As I write this in the first weeks of 2010, we're surrounded by snow, yet while our PCs may currently pump out enough heat to keep our legs warm, this might not be the case in a few years' time. Researchers at Stanford University have made the first three‑dimensional carbon‑nanotube circuits that can be stacked in multiple layers, cramming more processing power into a given area and also doing a better job of dissipating waste heat. Apparently, a circuit made from carbon nanotubes is five times faster than a traditional silicon circuit with the same power consumption. Currently, there are still difficulties in growing straight, pure nanotubes, but computers using this new technology could be available in 10 years time. Pure Star Trek!

Meanwhile, back on earth, many musicians rely on external hard drives to record and play back audio. However, some run into bandwidth problems when recording and playing back lots of simultaneous audio tracks onto such drives if they are connected via a USB 2 or Firewire 400 port, especially when they have an audio interface daisy‑chained off the same port.

Modern hard drives that I've benchmarked over the last year or so have typically offered sustained transfer rates of between 100 and 150MB per second, so it's hardly surprising that bottlenecks arise with the typical 40MB/second real‑world transfer rate of the average USB 2 port. Firewire 400 generally offers a real‑world performance edge over USB 2, despite theoretically having slower performance (400Mbit/s versus 480Mbit/s), and Firewire 800 is more than twice as fast as USB 2, but it now looks as if USB 3 might just become the more popular standard in the future.

While remaining backwards‑compatible with USB Low‑Speed (1.5Mbit/s), Full‑Speed (12Mbit/s), and High‑Speed (480Mbit/s), the fastest 'SuperSpeed USB' option of USB 3.0 is theoretically capable of a massive 4.8Gbit/s transfer rate. We've waited a long time for products to arrive since this technology was first announced by Intel in 2007, but initial results for SuperSpeed USB suggest that sustained transfer rates of 400MB per second are quite feasible, which is a factor of 10 better than High‑Speed USB. 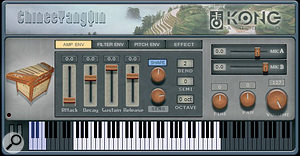 Kong Audio's YangQin dulcimer is an impressive‑sounding PC‑only VST instrument, recorded by Chinese musicians for ultimate authenticity.Finally, we should be able to use the fastest external hard drives, or solid‑state drives that offer massive 200MB-per-second sustained transfer rates without compromising their performance in the slightest! The 500 milliamps available via USB 2 ports to power external peripherals has also been increased, to 900mA, in USB 3, so we should see fewer inconvenient external power supplies.

As I mentioned in PC Notes January 2010, the first USB 3 motherboard has already appeared from Asus, and it has since been joined by the Asus U3S6 USB 3 PCI Express expansion card, featuring two USB 3 ports (which means you don't have to change your motherboard to take advantage of the new technology). There are now also various external hard drives available with the new SuperSpeed interface. Buffalo Technology (www.buffalotech.com) were first out of the starting gate with their DriveStation HD HXU3, available in 1TB, 1.5TB and 2TB models.

SuperSpeed USB leaves Firewire 800 in the dust, it's faster than eSATA (the external version of the SATA drives we find in most PCs nowadays), and it even outperforms the forthcoming Firewire 3200. In addition, Apple's decision to drop Firewire ports on many of their latest computer models does make it more likely that USB will become extremely popular in the future with musicians.

Gulftown News: By the time you read this in mid‑February, it may only be a few weeks until Intel ship their first six‑core processor, codenamed Gulftown and featuring 32nm Westmere architecture (www.intel.com). Each core of this Core i7 980X model will clock in at 3.33GHz and, with support for Hyperthreading, this means a jaw‑dropping total of 12 virtual cores in a single package. Featuring a 12MB cache, the 980X uses the same Socket 1366 as Intel's popular Core i7 920 model, making it a possible upgrade candidate for musicians who are already pushing their current processing boundaries. With this in mind, anyone still undecided whether to plump for a cheaper Core i5 audio PC or spend the extra for a Core i7 system with the Intel X58 chip set (Socket 1366) should now bear in mind that only the latter will offer an easy upgrade path to one of these new six‑core processors.

Kong Audio Releases: Since we last looked at this excellent range of PC‑only Chinese VST plug‑ins, quite a few new instruments have been released, including the GuanZi double‑reed pipe, Sheng mouth organ, YangQin dulcimer, Hulusi bottle gourd flute and GuQin zither. Authentically recorded by Chinese musicians, each instrument incorporates lots of playing styles, for ultimate realism. The demos (at www.chineekong.com) are very impressive!