Taking The Strain Off Your CPU

When I first starting writing this column eighteen years ago, my PC had a 33MHz processor and 8MB RAM, so it’s perhaps understandable that I sigh if today’s musicians grumble that their incredibly powerful music computers ‘run out of steam’. During the last few issues I’ve discussed how to get your audio PC to shut down and wake up more quickly, how to streamline your hard drive, and explained when Solid State Drives will boost audio performance, and when they won’t. However, the most significant tweak for PC audio performance is more fundamental than any of these. In my experience ‘running out of steam’ is rarely due to fragmented hard drives or lack of RAM, and is far more commonly due to CPU overload as a result of attempting to run more plug-ins or softsynth voices than your PC can handle. 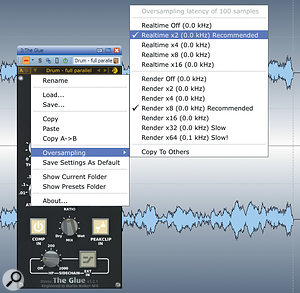 Many plug-ins that previously sounded better when running at higher sample rates now have integral over-sampling options for their internal calculations (as shown here with Cytomic's excellent 'The Glue' compressor, for example), so you can run your project at 44.1kHz without compromising audio quality.

Moreover, the most significant audio parameter relating to CPU consumption is sample rate, which by its very nature determines the number of calculations required per second to avoid audio ticks and glitches. So, although most audio interfaces now offer 24-bit/96kHz and even 24-bit/192kHz options, reducing your song’s sample rate to 44.1kHz will more than halve your CPU load at a stroke. And the good news is that this is unlikely to make a significant audible difference, unless you’re recording acoustic instruments with very high quality gear or are using a poorly designed audio interface. Most modern interfaces can sound stunning at 44.1kHz because the analogue stages of the A-D converters are so much better than many were in days gone by.

A few plug-in categories (such as analogue simulation, fast-acting compression and high-frequency ‘air’ EQ) have in the past sounded better run at 88.2 or 96 kHz than at 44.1kHz, but now that most developers are aware of such things, many have already implemented oversampling in their plug-in DSP calculations (in essence, increasing the sample rate before calculations, and then reducing it afterwards) to minimise such effects. So, if you’re currently running your projects at sample rates of 96kHz or more and running out of CPU capacity, try 48 or 44.1 kHz instead, and see if you really can hear a difference. If not, stick with 44.1kHz — your PC should immediately be able to run twice as many plug-ins and softsynth voices.

If The Cap Fits

Another good way to make your audio PC seem more powerful is to cap the polyphony of any soft synths you’re using. Many let you choose the maximum number of voices, and unless you’re into complex jazz chords, most pad sounds will be happy with sixteen voices or fewer, without ‘note robbing’ becoming noticeable. Guitar sounds shouldn’t ever really need more than six voices, and bass and melody lines can mostly be restricted to monophonic status. Not only is your CPU activity likely to drop significantly, but your mixes may also sound cleaner as a result!

Another big waste of CPU is, once again, nothing to do with your PC per se, but it does seem to happen a lot more among PC musicians than Mac-based ones, probably for historical reasons. Most songs don’t require more than two or three reverb types, so instead of placing separate reverb plug-ins in the insert slot of each audio channel, patch one or two in as aux send effects in your DAW, and then you can add variable amounts of the same reverb to each and every track. This approach also works with echo, chorus and any effect where the dry and wet sounds are mixed. It’s advice we’ve offered many times, but it bears repeating — and judging by some of the arrange pages I’ve examined over the years, using this approach could once again make your PC seem significantly more capable.

Finally, let me reiterate what I’ve discovered during my many real-world PC audio tests over the years. Disabling Windows Services is unlikely to boost audio performance, but can lead to all sorts of obscure crashes. As long as you have your Windows power plan set to ‘High performance’, and your hard drives all have their ‘Enable DMA’ box ticked in the Advanced tab of the relevant ATA channel in Device Manager, your choice of sample rate (along with polyphony and aux send tweaks) will make far more difference to overall performance. May your PCs live long and prosper!

Windows 9 On The Horizon

Microsoft's Build 2014 developer conference in April is likely to reveal the vision for their next operating system, rumoured to be named Windows 9 and to be released in Spring 2015.Particularly newsworthy are the rumours surrounding Microsoft’s alleged release date for the next major version of Windows in Spring 2015. As I mentioned last month, this next version has been codenamed Windows ‘Threshold’, and is likely to become available in three versions — the touch-based Modern, the business-oriented Enterprise and the simple Traditional, for die-hard desktop users who still yearn for the familiar Start menu!

Initially, the word was that this triple release would be officially announced by Microsoft at the ‘Build 2014 developer conference’ in San Francisco on 2nd to 4th April 2014 although, subsequently, a Microsoft spokesperson said the company “isn’t commenting at this time regarding future build dates”. Nevertheless, the rumours persist that Microsoft will indeed outline its vision for the next OS at the Build conference, and for where it wants Windows to go.

The name ‘Windows 9’ has also been strongly rumoured (and indeed was specifically referenced by Microsoft in a job posting some months back), but this hasn’t yet been officially confirmed. However, it does seem clear that the company wants to move on from the ill-fated Windows 8, and that “maturing and fixing the Metro design language” used in Windows 8 will be a major focus.