Now that Windows 8 supports touchscreen operation, manufacturers are getting inventive with their hardware formats...

Loads of musicians now routinely use PC laptops, because they let you make music on the move, collaborate more easily with other musicians, and perform live without having to cart around several flightcases full of gear. With the arrival of the Windows 8 touchscreen experience, I expect PC tablet use to become far more common too, because a multi-touch graphic interface is ideal for real-time sound and music creation, arranging and mixing.

The desktop, laptop and tablet formats have recently been morphing into fresh formats, so let's take a look at some new options for the musician. One natty option is the new flipover tablet/laptop hybrid format of the Lenovo Yoga: fold its hinge one way for a traditional laptop experience, or bend it almost 360 degrees the other way to use as a touchscreen tablet. A similar approach comes from Dell with their XPS Duo 12, whose touchscreen flips over within a frame for laptop or tablet duties. I can see these formats proving popular with musicians who sometimes need to do lots of fine editing, but want more hands-on flexibility for live use. 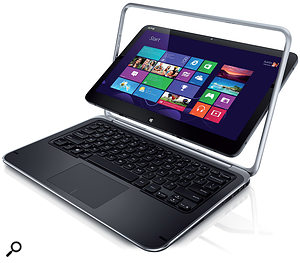 The Dell XPS Duo 12 is one of a new class of Windows 8 PCs that can be used either as a tablet or (with the flip of its screen) as a laptop.

While iPad competitors tend to stick with a seven to 10-inch tablet display, other manufacturers are exploring different versions of the PC touchscreen future. The Asus Transformer Prime tablet can plug into a keyboard dock accessory that morphs it into a laptop-type device. Intel have pushed the size boundaries somewhat further with their latest Adaptive All-In-One prototype. This can be used as a standard desktop PC with a keyboard and mouse interface, or its generous 27-inch screen can be detached from the charging dock and transformed into a stand-alone, touch-sensitive tablet that runs for about four hours on battery power.

The 2.5-inch-thick screen incorporates an optical drive, and can either be used horizontally for communal games (I suspect it would also make a wonderful audio controller or replacement for a mixing desk), or hung on a wall to watch TV or films. The main drawback at this stage is the weight; at 14lbs, it's not exactly portable, although Intel are working with screen and battery manufacturers to reduce this.

Meanwhile, if you're fed up of hiding a tower case next to your feet or having it occupying space in your rack, more streamlined desktop PCs are also appearing that incorporate the guts of the PC into the monitor and its stand. This 'all-in-one' approach has often been seen on the Apple platform (on the original '80s Macs and various iMac models, for instance), but now that Windows 8 incorporates extensive touchscreen support, some manufacturers are coming up with slick, all-in-one PC designs. 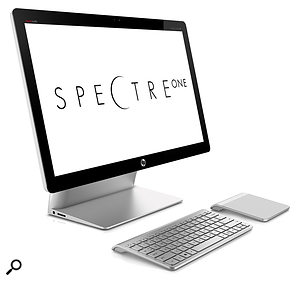 Slick all-in-one design comes to the PC, courtesy of the HP Spectra One, whose wireless touchpad is an interesting alternative to the Windows 8 touchscreen.

The Hewlett Packard Spectre One features a 23.5-inch aluminium display that's less than half an inch thick, incorporating an Ivy Bridge processor, 1GB Nvidia graphics card, and up to 2TB storage, with SSD option. It ships with a matching aluminium keyboard and wireless touchpad that sits alongside the keyboard to help you navigate through Windows 8. Its all-aluminium design looks extremely up-market, and you may well manage with its two USB 2 and two USB 3 ports if your audio interface is a USB model, although the all-in-one approach does, of course, preclude internal expansion slots for further expansion.

Some musicians may find the cheaper Hewlett Packard Envy 20 and 23 models of more interest, since these incorporate touchscreens, Ivy Bridge processors and up to 3GB of storage, although I still have reservations about touchscreens on a desktop machine, where you don't get the option of laying the screen flat or at a slight angle to the horizontal, as you can with a tablet. After all, you'll always get a better stereo image if you can keep your monitor screen out of the line of fire of your loudspeakers, either by moving it further away to sit between (rather than in front of) them, or laying it down out of the way. I also doubt that many people could use a larger near-vertical touchscreen for any length of time without getting aching arms, while, of course, a horizontal touchscreen mimics the mixing desk so much better. Ultimately, your choice of PC will be determined, to some extent, by how much processing power, storage capacity and expandability potential you need, but the PC musician has some very touching times ahead!

Dan Worrall of PlatinumEars is well known for his very useful range of video tutorials, for products such as Reaktor and Camel Audio's Alchemy, but you may not know that he also offers various PC-only donationware plug-ins on his web site (http://platinumears.com/plugins.html). I really like the FL4TT3RY 2 bus compressor, and I know Mike Senior is already a fan of the IQ4 Dynamic Equaliser for 'Mix Rescue' jobs. But my favourite is the L3V3LL3R, which is a faithful model of the famous 1960s levelling amp compressor. It can be fairly transparent if required, but comes to life when the controls are pushed to extremes!