Working On Music For Picture 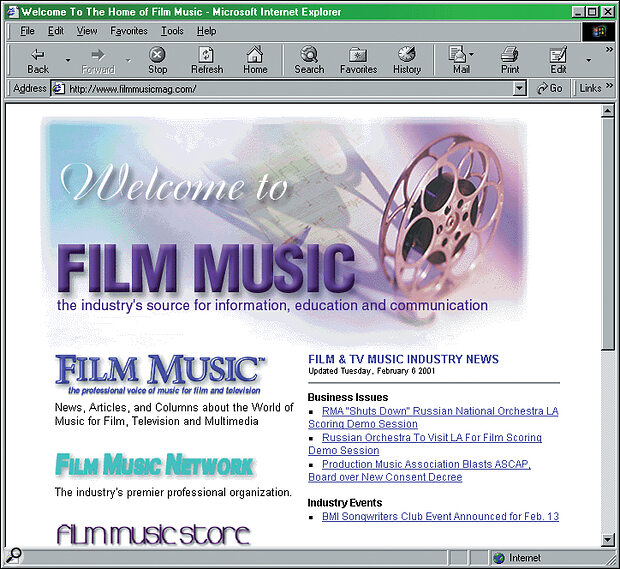 The advent of digital television has opened the eyes of many more musicians to the possibility of working on music for picture. John Walden trawls the Net to see what advice is available for those who want to score.

Composing music for use in TV and film is something that appeals to many musicians that have their own recording facilities, and with the appearance of so many new digital television channels, there's an increasing demand (although not necessarily any more money!) for people who can write music for the media. If it's a topic you would like to explore a little further, as with most specialist interests there's plenty of information and advice available via the worldwide web. The following selection should get you started. 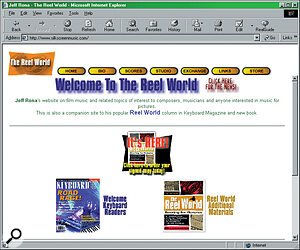 There are two very common pieces of advice that are given by working composers to those interested in learning about the craft. First, writing music for picture is not just writing songs without words. Second, a key part of learning how to write film (or TV) music is spending time listening to film (or TV) music. Essentially, these oft‑repeated statements boil down to having a good knowledge of the medium. To this end, there are some excellent web sites that can keep you abreast of news about who is doing what in film or TV music. Many of these sites provide reviews of soundtracks from current film releases (both in the USA and UK), interviews with established composers, business tips, technical articles and, of course, further links to related sites.

A good starting point is the on‑line Film Music magazine (www.filmmusicmag.com/). This site features international news items, sample contracts specifically targeted at film/TV music, business tips, and technical content — for example, on running a recording session, and the role of different individuals involved in the entire process of finalising music for picture, aside from the composer. The site is well designed, with lots of good information and short, snappy articles. It also offers some good links, such as those to its sister sites at www.filmmusicinstitute.com/ and www.filmmusicstore.com/. The latter has links to materials and guides that can be purchased online, including a small number of audio CDs containing seminar talks with industry professionals on particular aspects of the film/TV music process.

A number of other sites in a similar vein are also worth exploring. SoundtrackNet (www.soundtrack.net/), the Filmtracks site (www.filmtracks.com/), Film Score Monthly (www.filmscoremonthly.com/) and Field Of Dreams (www.fod‑online.com/) are rather like the above, with a wide variety of industry news items and reviews of new soundtracks. All these sites offer various other resources, such as interviews with film composers, plus collections of music business‑related links.

Given that Hollywood is such a big player in the world of film, it is not surprising that many of these web sites are based in the USA. However, if you would like a UK perspective, the Film Music On The Web site (www.filmmusic.uk.net/index.htm) is a good one to look at. Again, it offers reviews of new film scores, but also includes a number of short articles on issues related to writing music for picture (for example, the short article entitled 'So you want to be a Hollywood movie composer', by Stephen Barton). 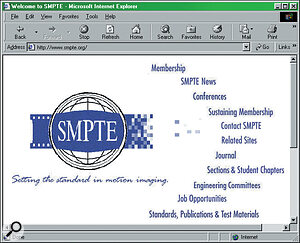 SMPTE from the experts!

In the 'fan' category, a good example is the Film Score Magic web site (www.geocities.com/Hollywood/8588/). It's nicely laid out, with some good commentary on a variety of film scores plus, on the links page, an extensive list of sites about particular film composers. The Film Music Society web site (www.filmmusicsociety.org/) covers similar ground and also contains a list of links to web pages about established composers, including Michael Nyman, John Williams, Vangelis and Hans Zimmer.

Another 'fan' site is The Philip Glass Pages (www.uni‑paderborn. de/~pg/glass.html). This site provides a comprehensive review of the work of Philip Glass. It features a list of the major soundtracks he has scored (Glass won a Golden Globe in 1999 for his score for the Peter Weir film The Truman Show, starring Jim Carrey) and a collection of articles/interviews about the man and his work. There's also a more official Philip Glass web site (www.philipglass.com/) that provides an interesting insight into what it takes to get to the top of the film‑scoring tree.

Of the smaller number of web sites maintained by composers themselves, Jeff Rona's site (www.jeffrona.com) is an excellent resource and well worth a visit. Jeff is a professional composer for film and TV (most recently providing additional music for films such as Gladiator, Mission Impossible 2 and Traffic) and a regular columnist for Keyboard magazine in the USA. He has also written a number of books on the practicalities and technicalities of writing music for picture. His site contains some great tips on technique and extracts from a selection of his articles — notably some brief sample budgets (in US dollars, of course) giving a rough idea of the costs involved in getting a score recorded, once it has been written. There is also a section that describes his studio facilities and demonstrates how well equipped you might need to be to compete at the highest level. This section takes the form of a studio plan with clickable links to photos of the gear (although be prepared to click and weep if you're the type that suffers from gear lust!). Furthermore, the site contains downloadable examples of Jeff's work, showing how some of his musical ideas are developed.

Jeff Rona's site includes some excellent links to other resources, and one of these links leads to Mark Isham's web page (www.isham.com/). Mark has scored over 50 films including A River Runs Through It and Rules of Engagement. Again, this site includes samples of his music but is worth a browse just for the pictures of his studio facility (another one to make you green with envy!), both in construction and as a finished article.

Learning more about writing music for picture inevitably means finding out about some of the technical issues surrounding video or film production. For those who feel like a bit of an idiot when it comes to SMPTE, there are a number of sites containing information on synchronisation standards. The Society of Motion Picture and Television Engineers is the organisation responsible for the SMPTE synchronisation standard and their web site (www.smpte.org/) has some useful information on the organisation and its remit, plus a fine list of technical books and documentation, produced by the society, that would be of interest. The other synchronisation 'standard' you need to know about is EBU; the web site of the European Broadcasting Union (www.ebu.ch/intro.html) hosts technical documents covering a wide range of issues, including detailed material on timecodes.

If you're drowning in all this sync, when it actually comes down to putting the theory into practice the Philip Rees web site (www.philrees.co.uk/index.html) is worth a peek. Aside from details of the useful MIDI connectors and sync boxes made by the company, the web site includes a really useful article on SMPTE/EBU sync issues. However, you are advised to disconnect your main speakers before checking this particular page, as it plays a timecode sample as audio when the article finishes loading!

As with any form of original composition, music produced for video, TV or film use is subject to a whole range of copyright issues. Dealing with the legal side of copyright is not much fun, so it's a good idea to know who might be on the composer's side, or can offer some advice. Some of the best places to start are the web sites of the official bodies that 'manage' copyright issues for the territory in which you work.

In the UK, the most obvious sites are those of the Performing Right Society (www.prs.co.uk/), British Music Rights (www.bmr.org/), and the Mechanical Copyright Protection Society (www.mcps.co.uk/). While none of these sites deals specifically with music for picture, between them they provide a very useful introduction to the world of music copyright. They can also give you some understanding of where your sources of income might be as a composer of music for use in TV, film or video. If you live and work outside the UK it's usually quite easy to track down your own national bodies that deal with this issue (for example, the BMI in the United States, which can be found at www.bmi.com/).

If the material on the sites listed above has whetted your appetite to learn more about producing music for picture, there are a large number of printed books (yes — on paper, just like SOS!) covering all aspects of this subject. As usual, Amazon (www.amazon.co.uk/) is a good place to start, but the Film Music Store and Jeff Rona's site, both mentioned earlier, have good book lists. In addition, the web site of the American Society of Composers, Authors and Publishers (www.ascap.com/) has a Film and TV section (worth a look) and some reading suggestions in its 'Guide to Resources' section. Happy reading!

Another related technical area that aspiring film composers might like to explore is that of video‑editing technology and, in particular, different video formats. A number of video‑editing magazines are available online or, like SOS, have a strong web presence with some free content. Digital Video Editing (which can be found at www.digitalvideoediting.com/Htm/.... htm) is an on‑line magazine offering lots of useful articles (for example, up‑to‑date comparisons between major video‑editing software and hardware systems) and links. Videomaker Online (www.videomaker.com/scripts/index...) does a similar thing and includes a simple, yet useful 'Getting Started' section with all sorts of reminders and checklists for the budding video maker. The web site for the UK‑based Computer Video magazine (www.computervideo.net) has an excellent discussion forum area where all sorts of information on the technicalities of digital video editing are discussed.

Of course, all the main manufacturers of video‑editing software have comprehensive web sites on their various products, if you want to find out more. These include Adobe (www.adobe.co.uk/), Avid (www.avid.com/), Ulead (www.ulead.com/) and Sonic Foundry (www.sonicfoundry.com/).