Apart from the differences in construction which are well documented on this forum, what are the advantages of choosing one over the other? Does one reject EMI better than RFI, and would either help in minimising ground loops? Thanks in advance...

mjfe2 wrote:Apart from the differences in construction which are well documented on this forum, what are the advantages of choosing one over the other? Does one reject EMI better than RFI, and would either help in minimising ground loops? Thanks in advance...

The outer screen of a balanced cable is there primarily to prevent radiated electric fields (eg RF interference) from reaching the two inner signal cores. However, as cables get bent and twisted, stresses build up in that outer screen and, depending on the construction, the screen can then open out and leave gaps through which interference can pass. There are lots of alternate schemes for screening cables, including twisting a load of individual strands around the cable (lapping), braiding the screen, using foil and so on... all with different advantages and disadvantages.

The Double Reussen screen is a variation on the lapped theme, with two separate sets of lappings spiralling around the wire in opposite directions and overlapping at 90 degrees to each other. This provides a very effective screen coverage (which tends not to open out after extended use), while also reducing the screen's electrical inductance, and still allowing the cable to be very flexible -- and it is a technique used quite widely on high-quality analogue audio cables.

Good starquad cables may well employ double Reussen screen's too, but don't have to. The starquad aspect refers specifically to the construction of the inner signal cores.

In a standard balanced cable there are two signal cores which are twisted together, and this twisting is the critical element in rejecting interference from magnetic fields.

Imagine a situation where the two wires aren't twisted but lie straight alongside one another, and off to one side is a source of electromagnetic interference. That interference will be slightly stronger in the closer wire and slightly weaker in the more distant wire, and consequently the induced interference currents in the two wires will be different and so won't be cancelled out by the differential receiver at the destination.

By twisting the two signal wires together, both wires take turns being closer to and farther from the interference source, and so on average both wires will receive the same overall magnetic field strength and have the same induced currents which can then be cancelled out precisely at the differential receiver.

And in general, this arrangement works well... except when the interference source is very close indeed. In this special case, the twisting 'period' or 'lay-length' is usually too long to maintain the required average exposure to the same strength of interference. And so we end up with an imbalance in induced interference currents.

The solution presented in starquad cables is to add a second pair of signal wires twisted (very tightly) in with the first pair. So you have four signal wires (hence the 'quad' part of the name), arranged in a cross shape (the 'star'). The key to making this work is to wire opposite pairs together.

In this way, the local interference source will be strongest in the nearest wire, but weakest in that wire's sibling, while the two wires in the second pair will both be equidistant and both receive a field strength which is mid-way between the strong and weak levels of the other two wires. Consequently, the two pairs both end up with the same exposure and so the induced interference signals will be cancelled out. 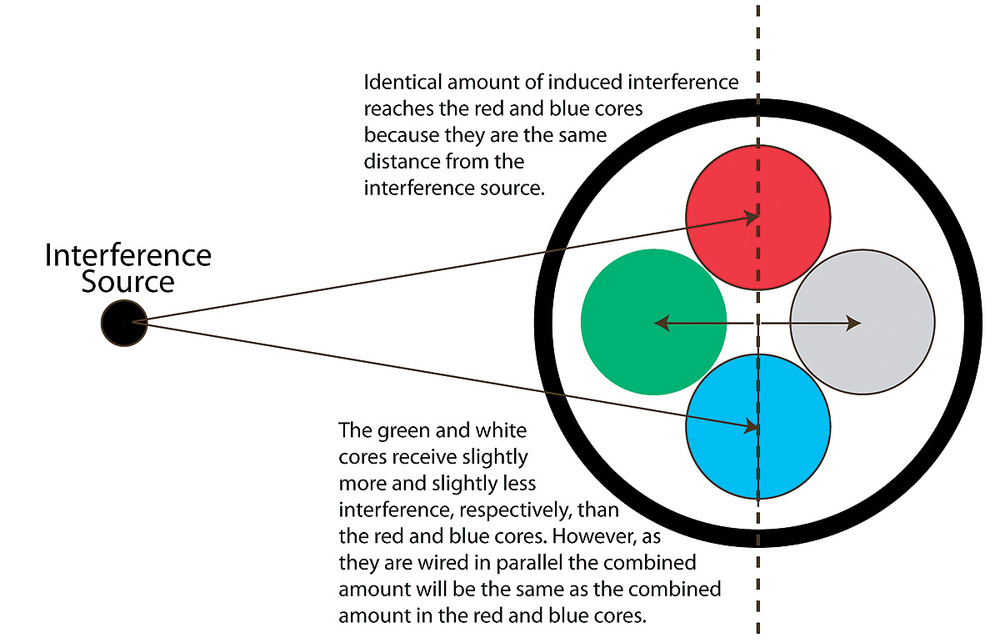 Starquad cables are very good at rejecting very close sources of EM interference -- such as when laying mic cables in a cable duct with lighting cables -- but are essentially no better than standard balanced cables when the interference source is more than a few feet away. And the extra pair of signal wires increases the capacitance quite significantly, which can become an issue in very long cable runs or if you are trying to force AES3 digital signals down the cable!

Broadcasters tend to use star-quad cable by default, but in my own location recording rig I have only one cable drum filled with starquad cables, and three with standard balanced cable with double Reussen screens! And I use the latter far more often!

I explained starquad cables in detail in the magazine's Q&A pages here:

As an aside, it might be worth noting that balanced cables don't have to be screened at all as the audio circuit is contained entirely within the two signal wires (unlike an unbalanced connection which relies on the cable screen as part of the audio circuit path). There are plenty of examples where balanced audio is transmitted over unscreened cables, with one of the most obvious being the standard telephone wires strung between poles. At the BBC's Broadcasting House, the original audio wiring between studios and the main transmission control room was balanced but not screened!

Yes, some 50 years ago we used clear, twisted mains cable for mics and even 100mtr runs were perfectly quiet.

Mind you, these were 30 Ohm mics into 1:60 transformers and triodes!

The coming of the 'radio controlled taxi' and transistors put and end to such economy.

Yes, some 50 years ago we used clear, twisted mains cable for mics and even 100mtr runs were perfectly quiet.

Mind you, these were 30 Ohm mics into 1:60 transformers and triodes!

The coming of the 'radio controlled taxi' and transistors put and end to such economy.

Memories! :) I came across 'mains as mic cable' in the early 70s and thought "Eh??". But the location recordings were all fine. Mind you I subsequently took on the role of OIC location recording in the same setup about 5 years later and all the cables were screened when I took over.