If the size of your home studio is, like mine, something of a compromise then the chances are that you're interested in anything that can help you make the most of the available space.

Rackmount equipment has always been reasonably catered for and the use of 19" cabinets in varying dimensions is a well-known solution for organising a large collection of gear in a relatively standard form-factor.

Unfortunately (well, from a practical sense anyway) my penchant is for synthesizers and every conceivable dimension can vary between models which results in something of a challenge as the collection increases in number!

As I have acquired more of them over the years, I have been through a number of reorganisations, declutters and recabling exercises in an effort to maintain access to those I want to be permanently available for use, as opposed to getting them out of storage as and when I need them. The more I have, the harder a practical outcome from such endeavours is to achieve, especially given that the room I use to house them is a compromise from the start.

Thus it was at Synthfest 2019 that my attention was drawn to a booth by Obelisque Design exhibiting a variety of extremely nice-looking extruded aluminium stands designed to accomodate small desktop gear (think Microkorgs, small drum machines and the like).

Upon closer inspection the quality of these stands proved to be more than skin deep; they were not only made from high quality extruded aluminium but sported a number of optional accessories in the form of supporting arms, shelves, attachments for rackmount equipment and more besides.

Intrigued by the possibility of racking larger gear I struck up a conversation with their Sales Director and was delighted to learn that the range on show was mainly the smaller more portable designs, that they could build custom rigs to order and that there was a solution in the works which would allow full-size synths to be wall mounted, with adjustable tilt and concealed cabling to boot!

At the time of writing the wall mounted system is still denoted as "Coming Soon" on their website but I recently found myself making a few more tweaks to my setup and thought that one of their 'off the shelf' models, in the form of the AWS Major would prove very useful. 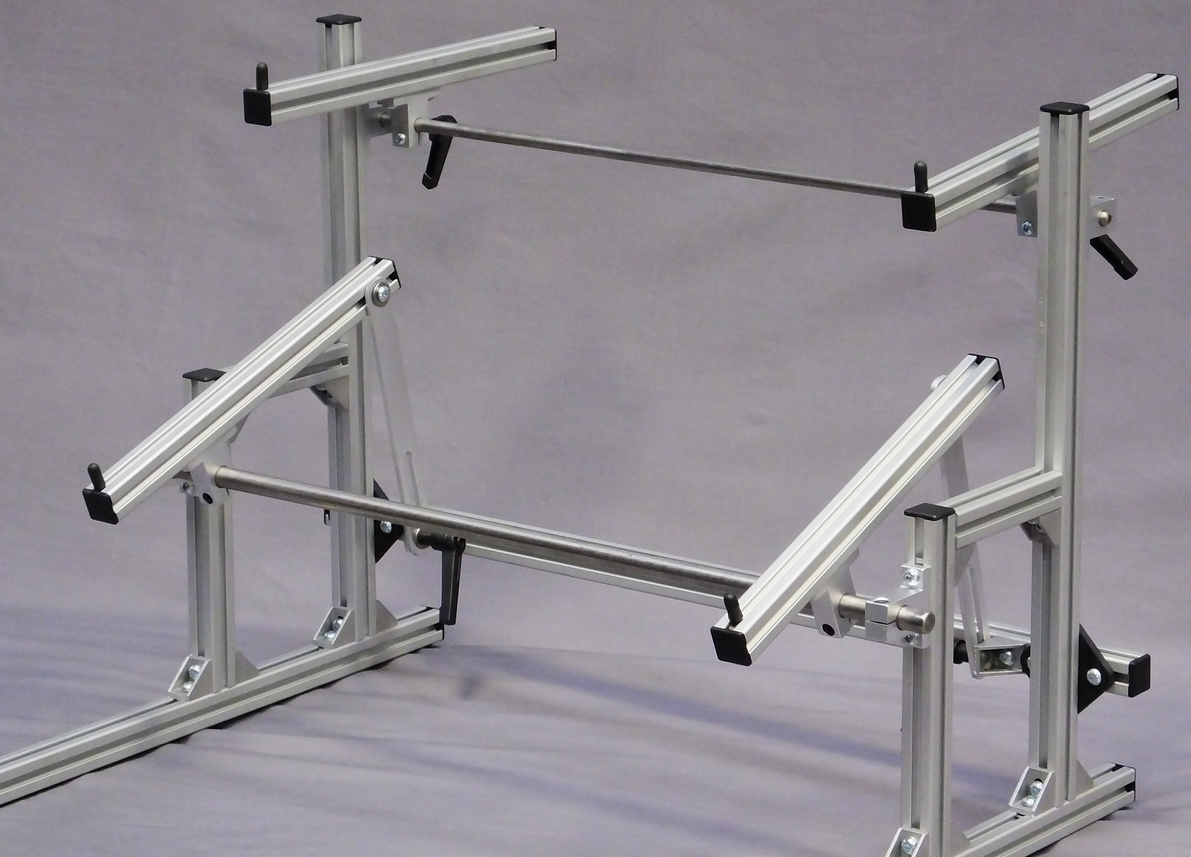 After ordering same, a promising-looking box arrived today containing the two preassembled end pieces, a handful of individually wrapped metal components and a plastic bag containing a small number of nuts, decorative trims, washers and allen keys along with a single sheet of instructions.

At first the instructions were easy to follow; they only had three steps! Steps one and two were a doddle, but step three (the mounting of the middle tier supporting arms) was a bit baffling.

This was in part due to the lack of an isometric diagram clearly showing how the components fitted into the assembly, in part down to the fact that the arms have a metal bracket on one end which needs to be rotated to make sense in the context of the construction and in part due to me trying to get it done in a hurry.

After a little head-scratching I realised that the brackets that attach to the back rail needed to be loosened and twisted round to meet that rail. It's a tiny issue but it would have helped to have had a clearer diagram included in the sheet supplied with the kit.

Here is a closeup of the part in question: 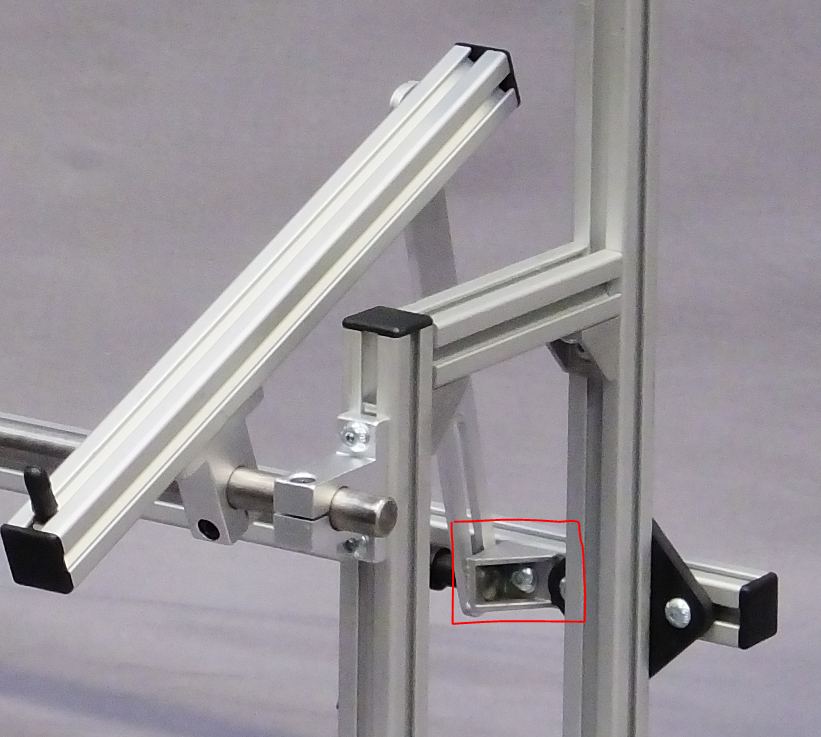 As shipped, the hole for the bolt that attaches to the back rail was facing upwards instead of backwards. Obvious in retrospect!

Having assembled the stand, I took some time to admire the design and the quality of construction. Each piece is as robust as it looks; the rods are solid steel and very strong, the clamps attaching the arms to the rods are well finished and fit with the overall aesthetic perfectly, every grub screw can be satisfyingly tightened and the retaining pegs on the ends of the arms are solid metal inside but with a soft rubber coating to prevent scratches to precious gear.

One thing I did note is that to get the rods and arms nice and rigid I did have to apply quite a lot of torque to the grub screws in the clamps. Not too much of a problem, the supplied allen keys worked and the stand was very solid, but my fingers were a little sore afterwards.

Fortunately I was able to rummage around in my toolbox and find a suitable hex screwdriver bit which made things a lot easier later when I was adjusting things while installing the stand in the studio. That said there are some adjustments which must be made with a supplied allen key that is non-standard in that it is modified to work in the confined clearance between the rotary levers and one of the bolts adjacent to them. In practice this is a little fiddly but not at all difficult.

It took me longer than it should have done to realise just how configurable the stand is. The tilt of the middle tier can be adjusted through the loosening of two bolts, permitting the rear supporting arm to slide up and down along the grooves cut into it.

The upper tier can not only be adjusted for tilt, but the arms can be slid to vary the ratio of overhang between the front and the back. This proved to be a fantastic feature for me, as I was able to push them far enough back that I could mount a light synth (in the form of a King Korg, at 7.0 kg or 15.43 lbs) on top without undue concern.

This may be slightly meatier than the 5Kg that Obelisque Designs recommend for the top tier but through tightening the clamps holding the steel rod, as well as the clamps attaching the arms to the rod it is perfectly stable.

This was in no small part down to the ability to slide the arms themselves back and forth front-to-back meaning that I was able to adjust the centre of gravity forwards and, through experimentation, find the best position that didn't compromise access to the DrumBrute on the middle tier.

The supporting arms on both the upper and middle tiers are adjustable for width too, as each arm can be positioned at any point along the bar to which it is attached. Although I did not have a need for them, additional arms (and other parts) can be ordered as accessories.

It's worth noting that the rotary 'levers' that tighten the clamps on the upper arms are a little awkward if you wish to adjust them while the rack is occupied, as the equipment on the middle tier may get in the way. I found this was of no consequence however, as you can loosen a bolt at the pivot point of those levers in order to enable them to act as a kind of 'ratchet'.

It's a little hard to describe but the upshot is that you do not have to have a full 360' rotation of movement to be able to tighten them fully, and in the event they would impinge on any gear sitting on the rack, they can be adjusted to a different 'position on the clock' without loosening the clamp.

In my case, I've probably used the stand in a slightly unconventional way, but it's proven absolutely brilliant in practice. As can be seen in the picture below there is plenty of space between each component, lots of accessibility from the sides and the back and the aesthetics are top notch! 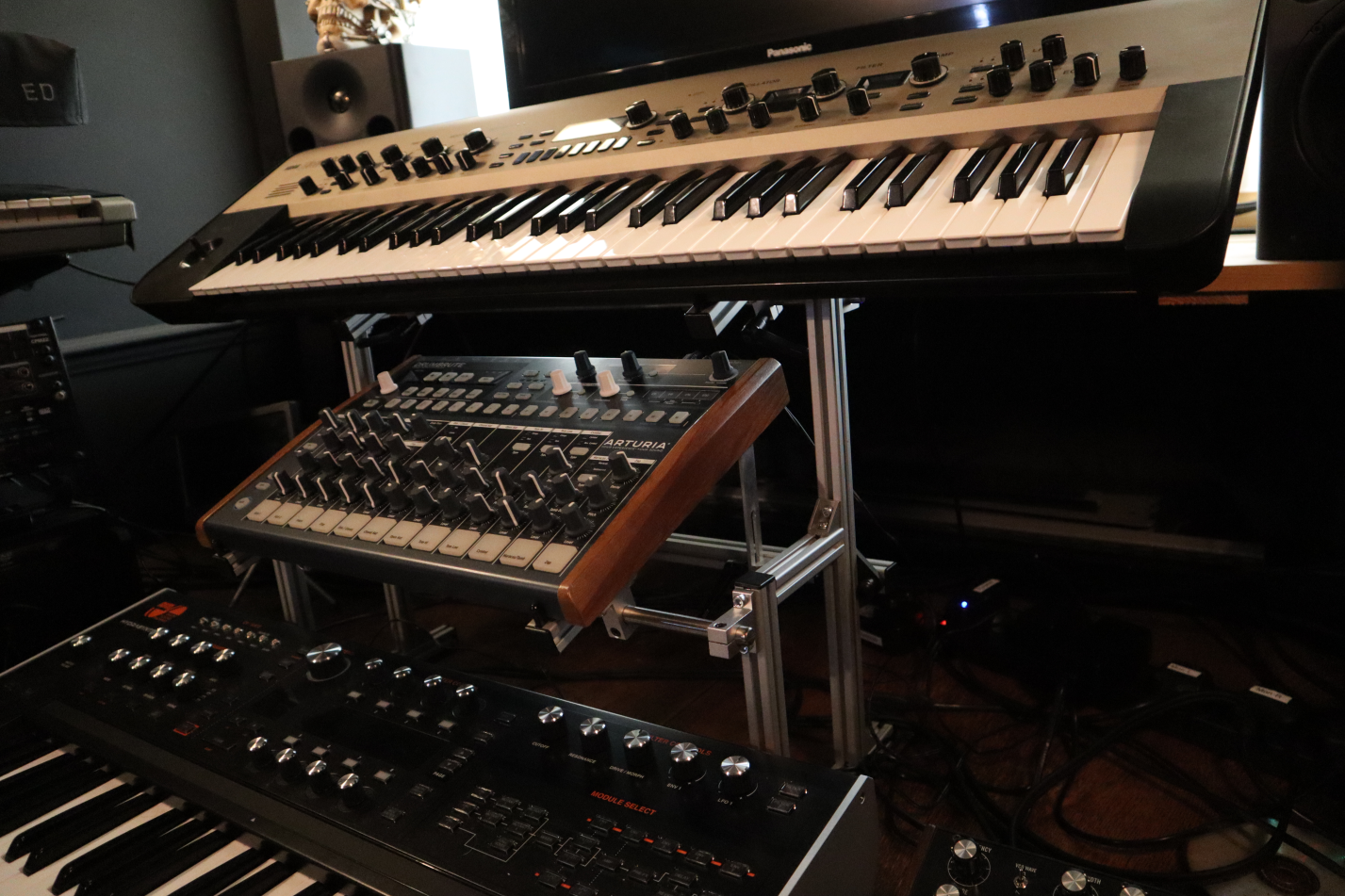 Furthermore, although not immediately obvious from the following picture, the Hydrasynth on the bottom is sitting on the protruding feet, which not only stabilises the rack as a whole but raises the instrument an oh-so-useful couple of centimetres off the desk, permitting cables to be run out of sight below it. 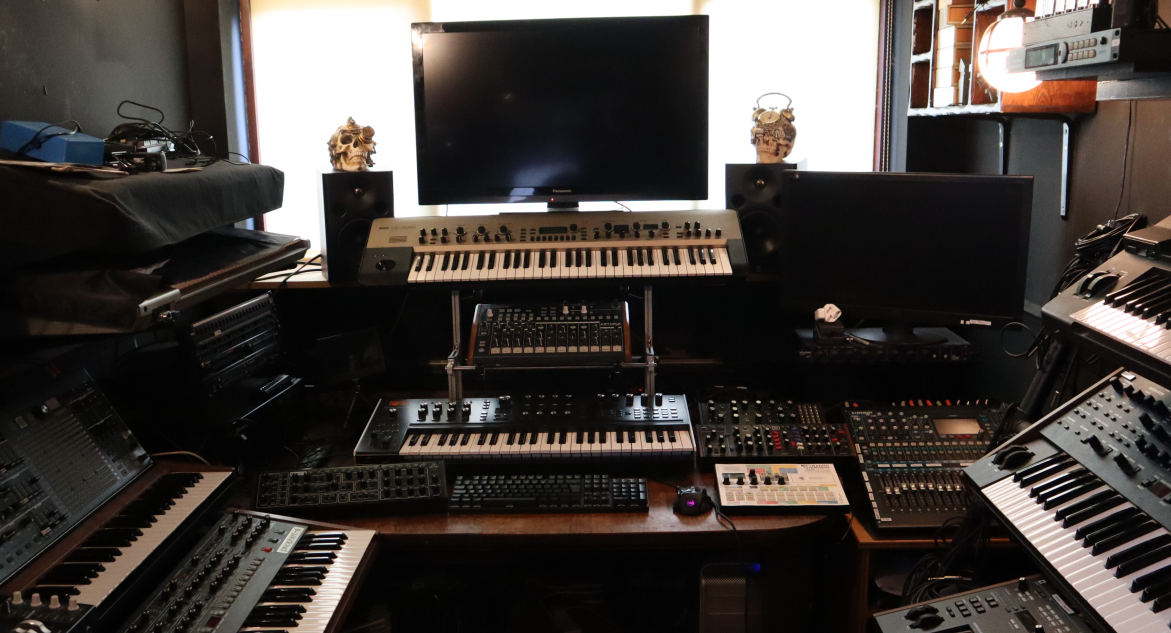 In summary, I am delighted with the AMS Major stand. It gave me one or two pauses for thought while putting it together and the instructions could be slightly clearer especially with regards to the attachment of the middle tier arms and pointing out of some of the finer configuration details, but none of these are matters for concern and in no way detract from a top-quality, beautifully engineered piece of studio equipment.

It has radically enhanced my working space and I'm very much looking forward to adding more of the same sort of thing to my studio when the wall-mounted options become available.

Credit to Obelisque Design for a great product at a sensible price!

Now that's an excellent review Eddy; the more I read, the more I was dreading the price. So I was genuinely surprised at the price, sounds great value.

And following the link was interesting. The Micro Tower M looks like a great companion for a set of B semi-modulars. And the Stomp Rack is intriguing as well. So bookmarked for future reference.

Thanks Andy. I was aiming for something broadly similar in tone to a Sound On Sound review insofar as I relish reading them myself and they present information in a friendly, digestible manner which I enjoy a great deal.

I can genuinely recommend the Obelisque Design kit; not only because I've bought some, but also based on my observations of the hardware they were exhibiting (and which I laid hands on) at the last Synthfest.

Their desktop stands follow the same design principles and use similar (identical?) high quality extrusions. The flexibility/configurability and overall build quality of the finished article in all cases is, as my mates and I used to say at school, "ace"!

I think by applying industrial thinking to 'our' market they've nailed it. It looks great, it's more stable (not to mention good-looking and adjustable) than many keyboard stands I've bought over the years and I'm really looking forward to adding more of their hardware to my environment.

Definitely worth keeping an eye on. I certainly am too!

My way of looking at it is simple...

zenguitar wrote:My way of looking at it is simple...

The question is rhetorical, of course

There's something with an impeccable pedigree that I have in mind...

But just the one Mrs Wembley.