Hi, I'm tidying up an old guitar I've had for many years.
It's a Vox VG6 from the 60s, a copy of a Gretch.
It's 335 shaped with single coil (but humbucker sized) pick-ups.
It has single volume and a single tone pot, and a rotary pick-up selector.

Then we have 3 toggle switches (all the same) which are, to me, oddities.
From the outside of the guitar, they look like a Les Paul PU selector switch, except with only 2 positions.
One is an on/off switch for the guitar's output.
The others are tone switches, using a capacitor, one for each pick up.
One of the switches is damaged beyond repair, and I'd like to replace it if I could find one.

Electrically, I think they are called SPST NC.
Each one only has 2 tags, and when the toggle is "straight" the tags are showing 0 ohms.
I can find similar switches, but they are heavy duty for mains with very definite "stiff" switching, I need the "Soft" feel of a Les Paul style switch. I hope that bit makes sense!
A mini toggle won't fit.
Anyone any ideas where I could locate one?
Thanks.

http://www.switchcraft.com/Product.aspx?ID=3339 is what you are after?

Or if you want to buy one

A photo would help, of the top and bottom of the switch, with a ruler or similar by it to gauge the size. It's difficult to get an idea of the size just from a description. (Have just Googled the guitar, and yes, they look like a standard Switchcraft-style selector switch, though possibly smaller).

With reference to switches etc., NC just means 'normally closed', which doesn't really apply to a switch, more to contacts in a relay showing the relay's unpowered contact positions.

I'm struggling at the moment to find anything suitable, as there are no Switchcraft-style 2-way switches showing up in searches. Almost all that size of switch are designed for fairly large current switching and so have a necessarily heavy switch action.

Random Guitarist wrote:Or if you want to buy one

That's just a standard 3-way switch, which won't do the job. What's confused you is that it's actually described as two SPST switches, as its got two sets of contacts, but it's still a 3-way selector switch.

* I did manage to make it work on a travel guitar I built by wiring the two single coil pickups in series and used a three position DPDT mini toggle to short each out in turd, centre off meant neither pickup was shorted so both were active.

Thanks for the replies.
I'm going to try to load pictures, in my next post.
Last time I tried this it failed, fingers crossed.....

I think I've got it to work. Hopefully you can now see 5 photos?

This picture shows the top two switches in situ if it's any help. 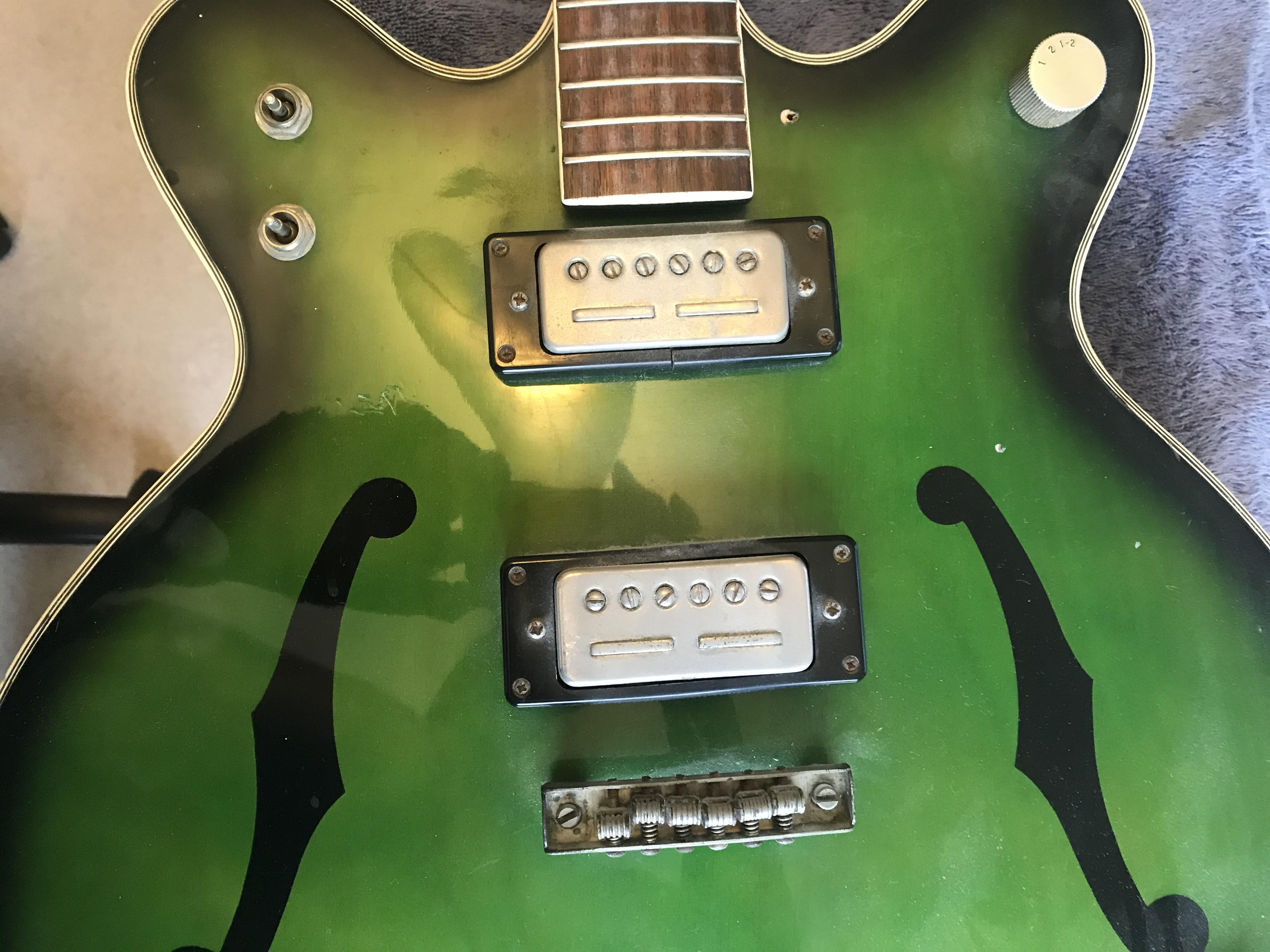 The position of the toggle suggests they have three positions, how many terminals/wires do they have?

Sam Spoons wrote:The position of the toggle suggests they have three positions, how many terminals/wires do they have?

It has only two positions and only two terminals.

Might be worth contacting Brandoni guitars. He bought the stock when the Eko factory closed. Eko made a number of Vox guitars so it is possible that they have an NOS replacement. No guarantees but worth a phone call or email.

Andy has got to the nub of the problem (as usual).

But it's interesting that the toggle appears to be central. If you can't find direct replacements I might be considering using the extra switch positions for extra features, or simply block some three way switches so they can't use the third position?

Thanks for the replies.

Thanks for that info Andy, I'll follow up on that. :thumbup:

Sam Spoons wrote:But it's interesting that the toggle appears to be central.

Yeah, when it's central, the two terminals are connected, and the guitar signal is untouched.
When the toggle is "down", the guitar signal's tone is changed.
There's a very good chance I'll never use it (or the overall on/off switch) but I'd like to see if I can get them working while I have it apart.

I get that, I'm currently debating whether to remove the volume control from my '81 Brian Eastwood custom acoustic and fit a passive UST pickup or add a preamp to de-couple the volume pot. Doing the former will leave me with a hole near the heel but I'm using a Tone Dexter preamp which seems to work best with a passive pickup.

Sam Spoons wrote:Doing the former will leave me with a hole near the heel but I'm using a Tone Dexter preamp which seems to work best with a passive pickup.

Put a switch there anyways hooked up to nothing as a "Producer Switch" :D

:bouncy: The one on my desk is labelled "DFA" :bouncy:

Sam Spoons wrote::bouncy: The one on my desk is labelled "DFA" :bouncy:

Thanks for the replies and ideas.
I still haven't been able to locate a switch.
But, as I don't really need an on/off switch on a guitar, it's no big hassle.

The other 2 toggle switches I always assumed were tone changers.
Someone has been inside this guitar before with a soldering iron, so I can't be certain to the originality of the wiring.
I've been trying to figure out how they could have been wired. In the central position, the (only) two terminals are connected, in the only other position (down) the two terminals are not connected.
My electronics knowledge is not strong, but for a tone control in a guitar, I'm pretty sure it's a capacitor connected between the live signal and earth.
I can't figure how to do this, with the central position being "no tone change", and the "Down" position being tone changed.

But, again, I'm beginning to care less! This Vox is supposed to be a copy of a Gretsch 6122. I've had a look, and the controls are different!
The 2 pots on a Gretsch are individual volume controls for each pick-up (one volume and one tone on the Vox), but those switches ARE tone switches. I cannot find out for sure if the old ones were simple on/off switches or, like some modern Gretsch guitars, actually 3 way tone switches, where centre position is direct, and down is one kind of tone change, and up is a different kind of tone change, using 2 capacitors with different values.
However, in looking into this, there are many queries as to the usefulness of these switches, and they seem to have been given the nickname of "mud" switches!

SO- Decision time. I'm going to forget about using all 3 switches (they'll be in situ, but wired similar to Sam's DFA switches ;) ) and wire the guitar more or less like a tele.
The Vox isn't in pristine original condition and worth a fortune, so no anoraks will be offended!

Guitar is back together, with 3 DFA switches.
I now have DEEP respect for those who work on semi-acoustic (335 style) guitars.
Re-assembly with wires getting tangled up, the bits of string coming of the end of the pots just as it pops up out of the body, dropping a pot back in the body before getting the nut on...
If I had a swear box I could pay off a considerable percentage of the national debt!