CS70 wrote:With the usual color analogy, all glasses will alter the whites a little bit, but what's important is that yellows stay yellowish and the reds stay reddish and if there's a hue change between two reds, the relative difference is preserved. In these conditions, the precise yellow and reds become less important (so long they don't become blues and greens!), because human perception is based much more on relative differences than absolute values.

If Sonarworks and similar brings different headphones a bit closer in that respect, it can become easier for many not to have to re-adapt as much as otherwise.

I think this is why I use Sonarworks. I find that with it engaged the tonal balance of my monitors is close enough to my headphones that I don't feel the need to reach for the EQ when toggling between them. Without it, there's a different emphasis in the highs that would have me second guessing myself a bit.
I could learn it, but it's easier for me not to have to.
But I always mix in the same room with the same kit. For more peregrinetic people this won't be the case.

I recently viewed this (what appears to be a technically decent) test of the headphone output of a range of current audio interfaces. Quite interesting results and showing how different they all are.

According the video, their test results showed a 90 ohm output impedance at 1kHz for the UR22C. Well worth a look.

Douglas Self has written a good explanation of the workings of headphone amps in Chapter 20 of his Small Signal Audio Design book: https://www.soundonsound.com/reviews/small-signal-audio-design-2nd-edition

In it he explains that the the signal voltage required to generate, say, 110dB SPL across a range of typical headphone impedances (30-600 Ohms) ranges from 0.11 to 1.1V, with higher impedances obviously needing more voltage.

The potential problem, then, is that if a 1.1V swing intended to generate a loud output on 600 Ohms phones was applied to 30 Ohm phones it would either destroy the phones, or the ears, or both...

The 'traditional solution' to this problem was to connect the headphones via a series resistor of between 50-100 Ohms since this approach automatically reduces the maximum voltage available for lower impedance headphones -- so it is a 'safety feature'. It also protects the amp from output short circuits, of course.

It would appear that this is the policy adopted by the Behringer interface headphone amp which, at 90 Ohms, is remarkably high for a modern headphone amp and smacks of an 'old-school' approach!

There are various ways of reducing or removing the output resistor to achieve a near-zero output impedance, and Self explains some of the them in the chapter... but, interestingly, most of his own designs seem to keep a resistor in place of between 47 and 66 Ohms.

There's a fascinating white paper here from Benchmark about why they design and use '0-Ohm' headphone amps... but even there the frequency response variations between a '0-Ohm' output impedance and a 30 Ohm output is only about 0.7dB at maximum (at the system resonance), while most of the amplitude variation is below 0.2dB... so not really noticeable!

Hugh, I have read the print off my 'Small Signal" book and I don't recall a part dealing with near zero headphone amplifiers?
I do remember the near zero impedance technique for low power line outputs and I have wondered if the same technique could be scaled up for a headphone amplifier? The resistor would be kept as short protection but 'cancelled' by the feedback arrangement.

I have reservations about 'protected, very low output impedance' amplifiers because any form of VI limiting 'can' impinge on sound quality. I will give the top people like Benchmark their due, expensive, superbly designed equipment but the 'fashion' is now being seen in the prosumer market and the circuits are maybe not so sophisticated? There was nothing wrong with 'A Resistor' IMHO. K.I.S.S! (Any chance of a few ad hoc THD test?)

Finally I have to think that the designers of headphones knew that they would be driven from a significant pure resistance over the range 22 to maybe 120 Ohms and built them accordingly.

I shall have a look at that link.

ef37a wrote:Hugh, I have read the print off my 'Small Signal" book and I don't recall a part dealing with near zero headphone amplifiers?

He briefly discusses enclosing the output Z within the feedback loop, but suggests that this approach would also require a zobel network to ensure stability.

I was referring to the 2nd edition. I have the first edition too, upstairs, but I haven't checked
whether that covers the same grounds. The 2nd edition discusses reducing the output Z on page 560 (third para).

ef37a wrote:Could yourself Martin and the other highly experienced chaps at SOS comment on whether the differences between high end monitor speakers are as great as they seem to be for 'so called reference' headphones? After all, you and the likes of Hugh, Paul et al get to audition vastly more high end kit that us mere mortals could in several lifetimes.

I'm sure Hugh and Paul have listened to a far bigger variety of high end monitor speakers than me, but all monitor speakers are at least attempting to make music sound 'natural' to life, as well as revealing as many of the small details as possible to help us make good mix decisions.

On the other hand, headphone manufacturers, even at the design phase, use different 'head models' and ideal responses. This can create a lot of confusion among users, because when headphones are described as having a largely 'flat' sound, the manufacturers don't mean a flat frequency response, but one that 'sounds flat' when compared with loudspeakers, aka a 'target response'.

To compound these different design goals, our individual heads and ears (in particular the pinnae, or flappy bits

) affect what we hear, as does the seal between phones and ears, which also impinges on the comfort factor (no use having a wonderfully consistent bass response if it means a tight clamp round your ears), and even taking your phones off and then putting them on again in a slightly different position relative to your ears can change their sound slightly.

All I can say overall is I personally find the generic (average) Sonarworks curves for my Sennheiser HD650 and AKG K712 Pro headphones make them both sound considerably closer to each other, and to my small ATC loudspeakers, which apart from acoustic treatment also use the Sonarworks Reference 4 utility and a calibrated Sonarworks measurement mic in my room.

All of this gives me more confidence in my mix decisions, since as Drew mentions you can switch from one playback setup to another without worrying that moving the goalposts.

Hugh Robjohns wrote:...but even then the resulting frequency response peaks/troughs due to the high source impedance will rarely amount to more than a dB or two unless the headphone's nominal impedance is particularly low and the tonal differences between different brands of headphone typically outweigh that quite comprehensively, especially at the frequency extremes!

Agreed - most headphones don't have a large enough impedance variation across their frequency response to make such anomalies a real problem. However, some headphones make life more difficult. Here are the measured impedance variations of four sets of headphones from a Hi-Fi News group test. The orange trace is that of the AKG K530, while the others in this group test were Audio-Technica ATH-AD700, Beyerdynamic DT440, and Grado SR80. 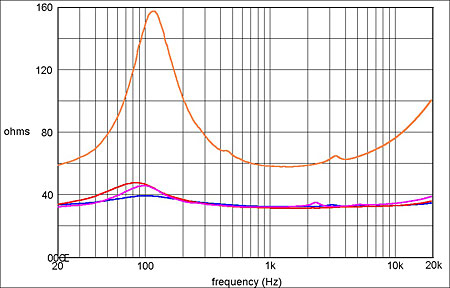 Now here's the simulation of how that impedance variation will translate into the frequency response with these four headphones fed from a headphone amp with an output impedance of 120 ohms: 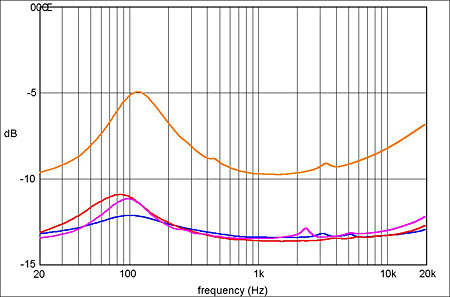 As you rightly say Hugh, many (if not most) phones will end up with only a dB or two of variation whatever headphone amp is used, but if you have a pair of these AKG K530 phones do make sure your headphone amp has a low output impedance!

... and I dare say more than a few people will really like the extra oomph around the kickdrum frequency and be upset if it's missing when they use a higher quality amp!

n o i s e f l e ur wrote:Do you have a custom profile for any phones from Sonarworks and have you made that comparison?

No, still have my ears

If several different phones aren't the different, any customization can't find any difference, right? Or do you mean something else?

Ears that haven't heard the difference between a custom Sonarworks profile and generic among and between different sets of phones you mean?

I guess I mean I don't understand the point of your diatribe or why it was addressed to me?

ef37a wrote:Hugh, I have read the print off my 'Small Signal" book and I don't recall a part dealing with near zero headphone amplifiers?

He briefly discusses enclosing the output Z within the feedback loop, but suggests that this approach would also require a zobel network to ensure stability.

I was referring to the 2nd edition. I have the first edition too, upstairs, but I haven't checked
whether that covers the same grounds. The 2nd edition discusses reducing the output Z on page 560 (third para).

Hmm, the book is quite a serious wedge. Might drop some hints around Pop's day!

I have actually read that test report before Hugh and, whilst in NO way qualified to argue! (don't have the kit for one thing) I have some reservations about the methodology?

It speaks of a Damping Factor of 6000! As I have said most headphones have a resistance equal to the nominal impedance (ok, MW found a rouge!) Thus the current in the circuit for zero zout and 60 R cans will be little more than that with a series 30 Ohms inserted. Where does massive electro-dynamic damping effect come from? There is the same argument about speakers.

Then, where does the distortion come from and what has it to do with DF? Distortion needs a non linear element. Where is it? If I might offer a suggestion? It seems the 'distortion' is being measured across a 'current sensing' 30R? Dynamic headphones are effectively half of a transformer and it is a fact of physics that magnetic materials cause (mainly ) 3rd harmonic distortion. Distortion moreover that is proportional to the inverse of F!

Why are we not shown the distortion across the CANS? And why has no one ever noticed this horror in headphones in the last 50 years?