The Impact Of DVD By Dave Shapton 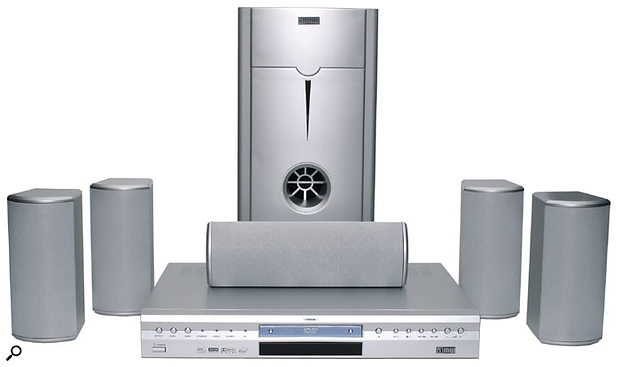 Even budget DVD players like the one in this low-cost AMW home theatre system can not only play CDs, but also MP3 files and surround sound DVD-Audio discs, as well as displaying JPEG digital images on your TV.

Could DVD kill the CD but save the music industry? Cutting Edge wouldn't be surprised...

I'm not sure if it was ever intentional, but it's beginning to look as though the DVD might be responsible for the ultimate demise of the CD. There may be good news for the music industry, however, if they can keep their heads and resist the temptation to sue every individual who has ever swapped files on the Internet!

If I said to you that you could have a DVD player that can also play MP3 files, display JPEG digital images on your television screen as a slide-show, and has a coaxial S/PDIF output, how much would you say it would cost? Before I tell you, consider this: it can play files from a DVD-R or DVD-RW, so with tracks encoded as MP3 you could play back discs that each could contain up to 70 albums. Seven hundred tracks! Enough to hold most people's core record collection. With DVD writers now at the price of CD burners two years ago, there's no obstacle to you putting your record collection on optical disc.

A couple of years ago I predicted that the price of DVD players would fall to below £100 before Christmas. I was wrong. It actually took another year or so. But now things have, quite simply, gone mad, because the multi-ability machine I mentioned a minute ago is in the shops, including VAT, for less than £50! In fact, I'm told you can get it even cheaper than that if you look around. For another tenner or so you can get a device with a similar specification, but including a Dolby Digital decoder — which means that if you can cobble together five loudspeakers and a subwoofer, you can have discrete six-channel surround sound.

It's clear, then, that the home entertainment landscape is entering a period of seismic activity. We seem to be at a stage somewhere between a full-scale earthquake and the liquefaction of the planet into a swirling ball of molten lava. You can now buy DVD players for less than CD players have ever cost, and they're probably going to get even cheaper. The point is, I suppose: why would anyone ever buy a CD player again?

Well, it's certainly been the case for most of the history of the DVD that, even though DVD decks have always been able to play audio CDs, they have never really sounded as good as dedicated CD players. I'm not sure whether this is a sacrifice to keep costs down, but I don't think there is any intrinsic, fundamental reason why DVD players should render audio any worse than dedicated machines. They are digital, after all, and quite decent D/A converters, at least in the consumer audio arena, are not a high-cost item any more.

I've got some of the latest DVD players to come out of China, and I've been testing them. Most of them cost around £50, and I have to say they sound pretty good. They've even got built-in EQ and all sorts of audio processing — which is probably best left alone! There are nice touches, too, such as a real-time spectrum analyser on your television screen while you play MP3 files. Even if they don't offer the ultimate audio quality from their analogue outputs, they have at the very least a coaxial digital output, and most of them have optical digital as well. OK, you'd need a decent converter to get the signal into your amplifier (see 'Alesis Have Got You Surrounded' box), but a cheap Minidisc deck would do the job, and would pretty much isolate you from any shortcomings of the DVD deck — apart, perhaps, from jitter. However, I can't say I've ever noticed this as a problem, although you definitely need to use decent digital audio cables!

Just to put all this in perspective: an entry-level DVD player I've recently tried costs less than £40. Despite its basic appearance, it has a digital output, can play MP3 files from CDRs and DVDRs, and can show JPEG files on a TV. So for about the price of two DVDs you can have a deck that will play them.

DVD has already attained the status of the fastest-adopted home-entertainment medium ever, and the rate of adoption can only speed up with these new, mad, prices. You can already see the effect if you go to the home electronics section of your local superstore. You don't have to look very far to find premium DVD titles selling for two or three times the price of the VHS version. OK, so DVDs have always been more expensive than VHS, and rightly so, because of the improved quality and extra features; but the price differential has never been as big and has never widened so quickly. What this suggests to me is that VHS as a medium for watching films at home is rapidly disappearing into the sunset. And it's going because everyone can afford DVD now.

Alesis Have Got You Surrounded

Surround-sound editing is being supported by more and more audio and video software packages, but I still don't see much evidence that people are mixing music in 5.1 surround, although the results can be very good once the medium is understood. If you're working on video soundtracks, surround certainly makes sense. Cheap DVD players could mean that more people feel inclined to mix in multi-channel. 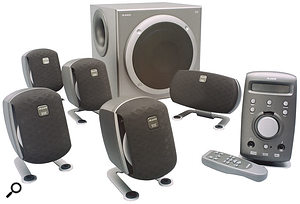 Alesis venture into the surround monitoring arena with the affordable ProActive system.Of course, it's no good trying to mix in surround if you only have stereo monitoring, and really good surround monitor setups can cost thousands, not to mention the cost of setting up an appropriate acoustic environment. So I was intrigued to see that Alesis, advertising in this very magazine, now have a surround monitor system costing around £300! For this, you get a substantial sub-woofer, four satellite speakers and a centre speaker, together with a remote-controllable decoder unit that also hosts audio and digital inputs. You can switch between optical and co-axial S/PDIF and six channels of analogue input. The decoder connects to a six-channel amplifier on the back of the sub-woofer, which also feeds the satellites.

The system can generate a genuine 440W RMS, and sounds pretty good, although at that price you shouldn't expect top-end performance (Alesis do claim THX certification for their surround setup, however).

I've had these monitors in my living room for a month or so and I'd have to say that the system is not necessarily great for music (but see below). What might appear to be its biggest strength — the sub-woofer — is also its major weakness: it's just too loud! With no user-accessible bass management, other than the ability to merely adjust the level of the sub-woofer, I find that even on its quietest setting the bass is far too prominent. Stuffing an old tee-shirt into the port on the side calms it down a bit, but there is little sense that the bass frequencies are well integrated with the audio from the satellites.

The story is rather different with film material, where explosions and crashes are rendered with satisfying gusto. Dolby Digital and DTS capabilities ensure that surround effects sound pretty good, with perhaps just a little dullness at the top end (but what can you expect from speakers at this price!).

As I said earlier, I probably wouldn't use the Alesis system as my main music speakers: the bass unit is just not subtle enough. But, oddly, I found that it was brilliant for certain types of '70s music, such as T-Rex and other music with the bass guitar played in a high register. It was almost as if the band was there, playing through a backline.

There are even bigger bargains than the Alesis system to be found. One of the low-cost DVD player manufacturers, AMW (Amphion Mediaworks Inc) has a complete home theatre system, complete with a DVD player, an RDS radio tuner, five satellites and a sub (pictured on page 36). It's reasonably powerful, and it's in the shops for less than £200, including VAT. I've got one for my kitchen. It doesn't sound bad in isolation and is fine as a replacement for a mini hi-fi. I have it connected to the kitchen TV and use it while I'm cooking!

The DVD-versus-VHS debate isn't necessarily of great interest to every SOS reader. But here's something that is: better-quality music. And guess what's going to bring it to us? Cheap DVD players.

You've probably seen articles about the new, higher quality, optical disc-based music formats, DVD Audio and SACD. But have you ever seen a DVD-A deck? For that matter, have you ever seen a DVD-A disc? Until recently, I hadn't. It was only when I visited a neighbour that I found myself listening to one. He has a portable 'clamshell'-type DVD player that just happens to play DVD-Audio. Looking closely at the disc (Hotel California, by the Eagles), I found a sticker claiming that, although it was a DVD-A disc, it would play in "any DVD player". So I put it in one of my Chinese DVD systems, and — sure enough — it played, in 5.1 surround.

This surprised me, until I realised that what I was listening to was not actually high-resolution DVD audio, but a Dolby AC3 (that's Dolby Digital) track that's included on most DVD-Audio discs for compatibility. Now, this is a great idea. Often, DVD-Audio discs are completely new mixes from the original multitrack tapes. Listening to an old album (such as Rumours by Fleetwood Mac) in a 5.1 mix can be something of a revelation — a bit like being able to look at a sculpture from a completely new angle. So here's a great new opportunity for the record companies to give us something new that might actually go some way towards justifying the ludicrous price of recorded music. It's quite simple: get behind DVD-Audio and make surround mixes a mainstream product. There's never been a better opportunity, with DVD players at almost literally giveaway prices. With many new DVD players sporting 192kHz, 24-bit converters, it seems likely to me that proper high-resolution DVD audio could easily be added to the ever-growing list of supported formats.

And there's another, perhaps more obvious choice for the record companies, who must have been feeling just a little uncomfortable with the news that they now make more money from sales of ringtones than CD singles. How about releasing DVD singles, incorporating music videos? One of the arguments I've heard to justify the cost of singles is the expense of producing a music video. Fair enough: it can be expensive (although modern digital video production technologies are a tiny fraction of the price they used to be). So why not simply let the end user buy the video? Of course there's the cost of 'authoring' a DVD (the process of creating menus and a file structure that DVD players expect to see), but I don't see why it needs to be radically different for every single. So it needn't be expensive. If DVD singles became the norm (ie. if the customers came to expect a video with a single) then, at the very least, they would be harder to copy, partly because of the much bigger file size.

It may be that CD prices never come down, after all. But at least we may be able to enjoy the irony that at some point the recordings will cost more than the devices needed to play them!