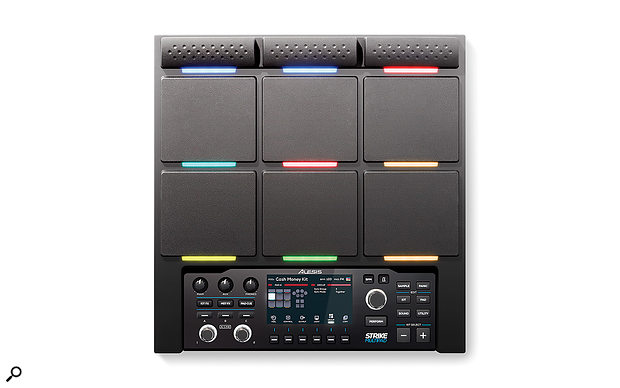 Does the Strike MultiPad's killer combination of features, practicality and price make it the best percussion pad on the market?

I've been reviewing electronic drum and percussion gear and, more importantly, using it in my drum setup, for several years, so I'm always interested in what's new and what advancements might assist the evolving hybrid drummer. There hasn't been a huge amount of new releases since 2017's launch of the Roland SPD-SX Special Edition (a slightly upgraded and much redder version of the SPD-SX reviewed in SOS October 2012), so I've been especially keen to get my hands on Alesis' new offering, the Strike MultiPad. Slotting in at the top of the MultiPad range (which also features the SamplePad Pro and SamplePad 4), the Strike MultiPad takes its name from the flagship Strike Pro kit. On first glance at the feature list, it certainly has flagship credentials, boasting an impressive 32GB of user memory, 8000 pre-loaded sounds, five effects processors, a multitude of inputs and outputs, a looper function — and a lot of flashing lights!

Pitting itself directly against the well-established Roland SPD-SX, the Strike MultiPad certainly looks the part. It takes the familiar percussion-pad form factor: nine discrete pads (six main pads plus three smaller 'shoulder' pads), plus controls and LCD sitting beneath them. Although cased in plastic, the unit feels sturdy and well built. The rubber playing surface of the pads extends across the whole top panel of the unit (apart from the recessed area housing LCD and controls), giving it a rugged feel and ensuring that misplaced stick hits will be both relatively silent and much less likely to cause damage. The most 'striking' thing about the Strike is the large multicoloured LED beneath each pad. These tell you a number of things about each pad and the sound allocated to it — but we'll come to that later!

At the rear of the Strike you'll find four outputs — a main stereo pair plus an additional aux stereo output — all on quarter-inch jacks. Beneath the outputs are the trigger inputs, comprising three jack sockets that can accept up to five trigger inputs. Input 1 is a single-zone trigger, while inputs 2 and 3 are dual–zone and can be split between two input sources with a Y-lead. The final input is a hi-hat control, which can be connected to an on/off or variable hi-hat pedal to achieve open and closed hi-hat effects. Not only is this a great feature, it isn't available on all of the Strike's competition, and it certainly adds versatility. A further two foot-control inputs are provided; these may be used to play sounds or control functions such as selecting the next kit, tap–tempo and so on.

The Strike ships with more than 8000 sounds, but a major selling point is that it also lets you import your own samples in WAV format via the USB memory socket. Or record samples direct using any audio source, from a smartphone to a microphone, via the left and right record inputs, which feature an input level control for setting gain. In addition to MIDI I/O, the Strike MultiPad can also use USB to exchange MIDI and audio data with your Mac or PC, without the need for an additional interface.

Back at the front panel, the controls comprise the usual collection of knobs and buttons surrounding the very large and impressively informative full–colour 'radiant' LCD screen, which measures 4.3 inches.

The main, aux and headphone outputs have dedicated volume controls, a nice touch that saves button pressing and menu surfing, particularly in live situations. Two front-mounted headphone sockets (quarter-inch and 3.5mm) are another nice touch! A pair of 'A-Link' knobs lets you control almost any parameter within the Strike for quick real-time adjustments. Above the A-Link section are Kit FX and Master FX buttons, along with something called Pad Cue. This is a great feature for live use, as it enables you to quickly audition the contents of any pad via the headphone output.

Six soft 'function' buttons sit below the LCD, corresponding to parameters on the display. Like all of the Strike's buttons, they light when selected — a small but helpful feature on a dark stage. To the right of the LCD is a large, continuous knob used for pretty much all the data entry and display navigation. An oversized Perform button functions as a home key, taking you directly to the main page displaying the currently selected kit and pad assignments. Edit buttons access Kit Edit, Pad Edit, Sound and Utility, and there's a Sample button which I'll cover in more detail as we delve deeper. Finally, two large +/- buttons are provided for kit selection.

The Strike ships with 30 preset kits and a further 70 user locations for your own kits. With the main (Perform) screen selected, the LCD not only shows the kit name and bpm but also a virtual layout of the nine pads, including the name of the sample (or function) assigned, along with a small graphic detailing playback type — Loop, One shot or Control — plus the pad's LED colour. Another press of the Perform button brings up the five trigger input assignments and a third summons the foot controller assignments. The three current kit effects, plus the master effects, are displayed along the bottom of the screen, with a dedicated soft key below each to toggle them on and off.

The larger kits can take a second or two to load into memory before you can play them. This isn't ideal but didn't dramatically affect playability as everything was pretty much there for me as soon as I was ready to hit a pad.

While the preset kits are great showpieces for what the Strike has to offer in terms of sounds and functions, I think it's unlikely you'll find a preset that perfectly fits your needs. The chances of a factory kit featuring a loop that suits your song or the exact kick/snare/conga combination you need for a track is doubtful. This isn't necessarily a criticism, though — for me, the Strike is primarily about creating your own kits using any of the 8000 internal sounds, or importing your own.

Having said that, I did find the preset kits fun to play. 'Good Ol' Rock' is a fairly standard set of acoustic kit sounds, and 'Latin Loops' combines a series of loops with bongos, shaker and timbale samples. Kits like the 'Knife Jogger' could be used to score a film, with huge toms and atmospheric synth drones, while 'Pluck This' puts tuned synth tones on each pad that could easily be used to play a melody. A number of the other presets introduce you to ways in which the Strike can control effects from pads or play multiple samples from the same pad.

Kits In The Bag

Creating your own kits is very simple, thanks to the large, informative display, dedicated buttons and intuitive user interface. Starting with an empty user kit, simply hit a pad and press the Sound button to access the Sound Assign screen, where you assign a sample to a pad. Like many electronic percussion devices, the Strike lets you assign two samples — Wave A and Wave B — to a pad, and mix between them using velocity. Sound selection is via the data knob, turning it to navigate sound categories and pushing it to confirm your selection. This leaves your other hand free to hit the pad and audition the sound.

Eight thousand samples sounds like a lot... and I can assure you it is! They range from every imaginable drum sample through to all manner of ethnic percussion loops, synth pads, guitar riffs and melodic tones, spread across 42 categories! The quality of the samples is exceptional, and the variety feels almost endless.

Each sample can be assigned a playback mode:

Once the samples are assigned, you can enter the Pad Menu, via a dedicated button, and configure each pad. The six function keys across the bottom of the LCD now correspond to Feel, Control, Output, Light, Group and Copy. This is where things start to get really interesting...

The Feel menu includes the usual range of parameters to set how each pad (and trigger input) responds. Sensitivity, Curve, Threshold and Fixed Level settings allow each pad to be tailored to your playing style. In the Output menu, Main+Phones, Aux+Phones, Phones Only, or one of the three Kit FX engines (more later) can be selected as output destinations. You can also set the MIDI note sent from each pad.

In the Control Menu, a number of control options can be assigned to each pad: Next Kit, Previous Kit, Click On/Off, Tap Tempo, Panic, Looper Record, Looper Play/Stop and FX On/Off for the three Kit FX and the Master FX. The ability to assign functions to pads rather than having to hit a button is great, and switching effects on and off as you play can produce very creative results.

The Group Menu enables you to group pads together and apply a mode to that group. A typical example would be a mute group, where playing one pad in a group mutes all the others, but the Strike has more up its sleeve: Together, Random, Cycle and Hi-hat modes. All pads assigned to a particular group will either play together, in a random order, or cycle (numerically) when any pad in the group is struck. In Hi-hat mode, the assigned pads cycle with each press of the connected Hi-hat pedal. These modes can be used to great effect for unique melodic patterns or to give a 'human' random feel to a drum part by assigning slightly different samples to each pad in a group.