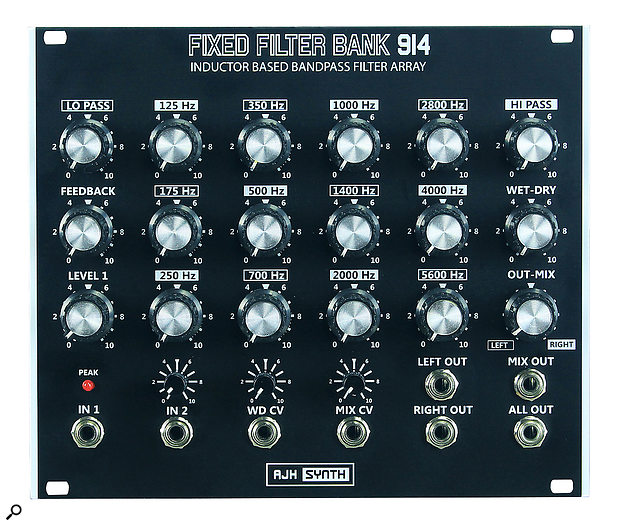 Fixed filter banks have been part of the synthesist's armoury almost since the appearance of the earliest Moog modular synths in the 1960s, but they remain misunderstood modules, often employed as little more than graphic EQs. This is understandable; notwithstanding the high and low shelving filters that bounded their frequency ranges, fixed filter banks such as the Moog 907 looked much like graphic EQs with knobs rather than sliders and, with no I/O other than a single audio input and a single audio output, they were little more than sophisticated tone controls — albeit rather euphonic ones. Even the later Moog 914 did little to dispel this idea; it provided 12 rather than eight filters within the high and low shelves but the principle remained the same.

As the name suggests, the AJH Fixed Filter Bank 914 is based upon the Moog 914 and offers the same 12 fixed-frequency filters spaced at approximately half-octave intervals, with roll-offs of 12dB/octave and centre frequencies covering a range from 125Hz to 5.8kHz. And again, a misnamed low-frequency shelving filter sits below this range, and a misnamed high-frequency shelving filter sits above it. (The error is Moog's fault; they called these low-pass and high-pass filters respectively, and AJH have retained their nomenclature.) But although much of the inspiration for the AJH 914 comes from the Moog 914 it's no clone, not least because it's a 30HP module designed for Eurorack systems rather than the larger 5U format, it's shallow enough to be used in skiffs, it's constructed using modern technology, and it's a two-channel device with two elements of voltage control rather than a single-channel device with no control inputs.

It works like this: any signal presented to input 1 is sent down two parallel signal paths, one comprising the low shelf plus the 175Hz, 350Hz, 700Hz... (and so on) filters, and the other comprising the high shelf and the 125Hz, 250Hz, 500Hz... (and so on) filters. In essence, this means that it comprises two one-octave filter banks offset by half an octave. What then happens to those signals is down to you. For example, you can extract the result from the All output so that the result is the same as you would have obtained from a single-channel unit. Alternatively, you can obtain the same result from the Mix output by recombining the two sides using the Left/Right mix control and setting the Wet/Dry mix knob to fully wet. But once you start to experiment with these controls you can do much more, not least because you can employ separate CVs to modify the two mixes. (The active range of the CV inputs is 0-5 V, but their associated attenuators allow you to inject hotter signals if you choose.) In addition, there's a second audio input for the Dry signal path, so you can mix the filtered signal from input 1 with a different signal injected into input 2. You can also tap the unmixed signals from the two filter paths using the dedicated Left and Right outputs and direct these to the destinations of your choice. (This is a great way to create fake stereo from a single channel, obtained when audio signal components fall within the pass-bands of different filters and are accentuated on either the left or the right channel.) Of course, you can tap the signals from all four outputs simultaneously, which suggests numerous additional possibilities. Finally, there's a feedback loop from the Mix output back to input 1. The response in a multi-filter architecture is different from the resonance (or 'emphasis') of a single filter, but you can obtain many related effects ranging from whistling and ringing of any accentuated bands to screaming feedback and distortion. Some people are going to love this.

I started my tests by patching the 914 in the most basic fashion with an audio signal presented to input 1 and the filtered signal tapped from the All output. It responded as I had expected, modifying the timbre of any signal passing through it with results that could range from subtle tone shaping to sonic mayhem when significant resonance was employed. However, because the 12dB/octave filters roll off quite sharply, there are bumps in the response even when all of the controls are set to 'flat', which means that the one result you can never obtain is an unmodified signal.

The 914 is much more flexible than you might imagine, and it's capable of generating results that you would find hard or perhaps impossible to obtain by other means.

Next, I re-patched the system to derive the filtered audio from the Mix output. This was when I discovered that the input 2 level control also determines the loudness of the dry signal path. I set this to maximum so that I could mix between the wet and dry signals with the expected results, and then discovered that the Wet/Dry knob is labelled backward; it's actually a Dry/Wet knob! I now directed the output from an LFO to the Wet/Dry mix CV input and the output from a second LFO to the Left/Right mix CV input. The results could be glorious, with subtle settings again generating unusual tonal changes and radical settings producing some fascinating results, with all manner of sophisticated (but still screeching and tortured) effects obtainable.

Before finishing, I tried shaping the tones of acoustic instruments such as classical guitars. (When used in this way, fixed filter banks are sometimes called formant filters.) If I had to find a single word to describe the results that I obtained from the 914, it would be 'smooth', which is no small compliment.

In conclusion, the 914 is much more flexible than you might imagine, and it's capable of generating results that you would find hard or perhaps impossible to obtain by other means. It's not cheap by Eurorack standards, and it's quite power-hungry (180mA positive, 170mA negative), but it's well engineered and, whether you prefer the aluminium or black finish, it will grace any Eurorack system.